The Audi 100 C4 is an upper middle class vehicle that was manufactured by Audi from late 1990 to mid-1994 and represents the fourth and final series of the Audi 100 . 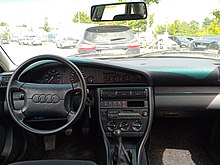 As the successor to the Audi 100 C3 , the C4 (internally C4 4A), also made of electrolytically galvanized sheet metal, was launched on the market in December 1990 . For the first time, a newly developed V6 petrol engine with 2.8 liters displacement, variable intake manifolds and 90-degree arrangement of the cylinder banks with 128 kW (174 hp) was offered. The processing turned out to be significantly higher quality than that of the previous models. With the C4, Audi took another big step towards the luxury segment through measures such as reducing the gap between the bodywork, the consistent use of higher-quality materials in the interior and entry into the six-cylinder class, in which the competition had claimed safe territory for years.

The "Avant" station wagon variant introduced in October 1991 had a completely different conceptualized rear end than its predecessor, which, in addition to more loading volume, had less steeply inclined side windows. In the Audi 100 C3, this tendency caused the interior to heat up noticeably when exposed to sunlight, which led to a lot of criticism.

The engine with the five-cylinder gasoline engine and 98 kW (133 hp) from the previous model remained on offer. In March 1992, a version between the 2.3 and 2.8 liter engine with six cylinders, 2.6 liters displacement and an output of 110 kW (150 hp) was added. There were two different diesel versions with five-cylinder technology, a 2.4-liter swirl chamber diesel engine with 60 kW (82 hp) and an 85 kW (115 hp) 2.5-liter turbo diesel with an electronically controlled injection system, direct injection (TDI process) ), Distributor injection pump with electronically controlled quantity control unit and, for the first time, an electronic air flow meter. Both engines had oxidation catalytic converters, the TDI was also equipped with an exhaust gas recirculation system for NOx reduction, which was controlled by the electronic engine management.

The sporty model of the C4 appeared as the S4 from October 1992 . It was optionally available with the 2.2-liter five-cylinder known from the Audi 200 , a turbo engine with 20 valves that now developed 169 kW (230 hp) after switching to the inactive ignition, or with the 4.2- liter engine adopted from the Audi V8 . Liter V8 engine. The introduction of the second-generation high-performance brake system with 314 millimeter brake discs at the front was new for both models.

Successor to the Audi 100

The renaming of the series to A6 or S6 ended the successful Audi 100 era in July 1994 in favor of the new nomenclature “Audi A x”. The original idea of ​​naming the Audi models in horsepower after their performance ( Audi F103 ) was no longer adhered to with the Audi 100  C1 .

The first Audi A6 with the new name is a technically modified and face-lifted Audi 100 C4 in many details, which was built as the A6 until autumn 1997.