In Japan at the time of the shogunate , the Ōnin war begins . It is triggered by a dispute about succession in the Ashikaga family . Shogun Ashikaga Yoshimasa installed his brother Yoshimi as his successor in 1464, as he had no direct successor. However, about a year later, Yoshimasa's son Yoshihisa was born, and he would like him to succeed him. Since the Ashikaga shogunate has already lost a lot of its influence under Yoshimasa's rule, the powerful clans Yamana and Hosokawa sense their chance. They take a position and each support one of the two aspirants to the position of Shogun. The Yamana under their head of the family Yamana Sōzen stand behind Yoshihisa, the son of the Shōgun, the Hosokawa under Yamana Sōzen's son-in-law Hosokawa Katsumoto behind his brother Yoshimi. The partisanship of these large families also divides their vassals. At the beginning of the year the Hosokawa gathered around 80,000 men and the Yamana around 85,000 men in the capital, Kyoto . Neither of the two parties can and wants to start the war, because this would mean opposing the ruling Shogun. The Yamana eventually break this stalemate by bringing in more troops and setting fire to the Hosokawa camp. In July the fighting reaches the proportions of a war, which leads to the fact that Kyōto's north is completely destroyed. This leads to an exodus of the urban population. 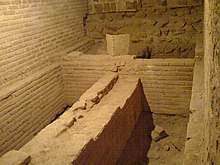