The title of this article is ambiguous. Further meanings are listed under Dreux (disambiguation) . 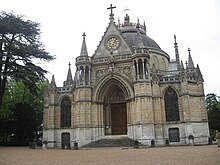 Dreux is located about 90 kilometers west of Paris , in the valley of the river Eure at the confluence of its left tributary Blaise .

The city was the capital of a small Gallic tribe, the so-called "Durocasses". In Roman times, important roads crossed here. In the Middle Ages the city was the seat of a county . Various members of the French royal family are buried in the Chapelle Royale Saint Louis.

Battle of Dreux : During the First Huguenot War , on December 19, 1562, the Protestant troops under Prince Ludwig I of Condé and Admiral Gaspard von Coligny were defeated by the Catholic army under François de Lorraine in the Battle of Dreux .

Dreux is the birthplace of François-André Danican Philidor (1726–1795), a composer who is best known today as the strongest chess player of the 18th century.

In the Franco-Prussian War Dreux was captured by Prussian troops on November 19, 1870.

The place received international attention in 1983, when the then insignificant Front National was able to achieve its first major electoral successes and received a majority in the city council; The reasons given were high unemployment in the industrial city and the fear of foreign infiltration due to the arrival of Algerian-Muslim immigrants (especially Harkis from the Algerian war). During the 1990s, contrary to the trend in the rest of the country, the influence of the right-wing extremists was pushed back, so that the party is now represented on the city council with only 2 of 39 council members; in addition, the city made extensive efforts to change its bad reputation. In the 2014 European elections , the FN was the strongest party in Dreux with 24.71%; It also won the first round of the 2015 regional elections in the city with 26.86%, but in the second round had to admit defeat to the candidate of an alliance of various left parties.

Dreux is by twinning associated with

Municipalities in the Arrondissement of Dreux