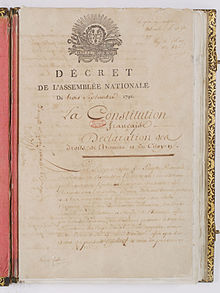 At the head of the executive was the king , who was allowed to appoint and dismiss his ministers who supervised the officials in the 83 departments and municipalities . The civil servants were introduced to their offices through the election of active citizens . The King, together with the Legislative National Assembly, had control of the armed forces , with sole supreme command in the event of war . In addition, the king had a suspensive veto on the legislative proposals of the National Assembly, ie he could postpone a bill for two legislative terms (four years).

For the legislature is Legislative Assembly responsible that every two years by electors was chosen. The electors (approx. 45,000) in turn were elected every two years by the active citizens (approx. 4.3 million) (one voter for 100 voters). The National Assembly, together with the King, had supreme command of the armed forces (see above for exception) and controlled the ministers and the courts of law. The assembly consisted of 745 members. Of these, 247 were selected according to the area, 249 according to the population and another 249 according to the tax revenue. Constitutional changes could only be tackled if the parliament expressed the corresponding wish in two legislative periods. In the third legislative period, a revision assembly was then formed, which consisted of the National Assembly and a further 249 members elected for this purpose only.

The judiciary was divided into three different judicial institutions: First, the High Court, which could be convened by the National Assembly and ruled on the offenses of statesmen. In second place the appellate court and in third place the courts of justice, whose judges and jury were elected every two years by the active citizens.

In France, the so-called census suffrage was applied , which means that every man over 25 years of age who had a certain tax revenue had the right to vote. These men were called active citizens.