This article deals with the synod of 1095, and the council of Clermont was held in this city in 535 . 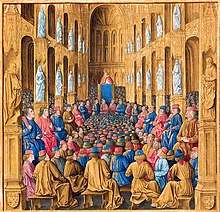 The Synod of Clermont was a Synod of Bishops of the Latin Church convened by Pope Urban II and took place in Clermont from November 18 to 28, 1095 . The disruption of the church and thus also of the political system in Europe through the schism and the investiture dispute were discussed . In addition, the first crusade emerged from the synod.

With Urban II. And Clemens III. two popes claimed rule over the church. While Clemens supported Emperor Heinrich IV , Urban was in opposition to the Emperor. Also in numerous subordinate church offices there were multiple occupations by contending parties, as a result of which the fulfillment of pastoral care tasks suffered.

Urban II wanted to end this situation and at the same time consolidate his own position. The Synod of Piacenza in the spring of 1095 was largely inconclusive. However, due to the presence of a delegation from Byzantium who asked for help from the Muslim threat, Urban II had the idea of ​​a pilgrimage to Jerusalem . In the months that followed, the Pope propagated this project and the plan for another synod throughout Europe. On November 18, 1095, Urban II opened the synod in Clermont.

The council was primarily concerned with problems of everyday life within the church. During the synod, Urban proclaimed a series of reform laws that were intended to restrict the rights of secular rulers within the church. So were lay investiture and the fealty of clerics to worldly powers prohibited. In addition, Urban tightened the ordinances on celibacy , reiterated the ban on simony and the carrying of arms by priests and announced provisions on fasting times . In addition, the ban against the adulterous King Philip I of France was reaffirmed.

A total of 14 archbishops , 225 bishops and more than four hundred abbots are said to have attended the council. There were no representatives from England or Germany and Spain was sparsely represented. The acts of the Council mention, among other things:

The wording of Urban II's speech has not been preserved. Six contemporary sources shed light on this part of the council:

The versions differ greatly and are - especially with Balderich and Guibert - influenced by subsequent events. The Gesta Francorum only give rough information about the fact that the Pope preached the crusade during his stay in France. They do not give details of the speech in Clermont. According to Fulcher von Chartres , Urban called for help for Christians in the east, referring to the concepts of just war and holy war and promising forgiveness of sins in the event of death. Robert von Reims reports in great detail about an open-air speech. In response to the bellicose words of the Pope, the crowd is said to have shouted " Deus vult ". Balderich von Dol described an emotional sermon focusing on insults by Muslims and the possibility of retaking the Holy Land. Also Gubert of Nogent emphasized this more than the aid for Eastern Christians.