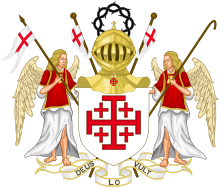 “Deus lo vult” can be read as the motto of the Order of Knights of the Holy Sepulcher in Jerusalem on the banner of their coat of arms.

The crowd replied with the words Deus lo vult ( Middle Latin for “God wants it!”) When Pope Urban II called in a sermon on November 27, 1095 at the Synod of Clermont for the liberation of Jerusalem . With this he founded the first crusade , which had contributed to the liberation of the " holy places " and was supposed to help the individual participants to atone for their sins.

“God wants it” is Deus vult in classical Latin , based on the irregular verb velle . Deus lo volt or Deus lo vult represents a modification for the contemporaries of the First Crusade, who were not used to classical Latin and who spoke a large part of the Provencal or Limousin idiom ; hence the form Dieux el volt arose .

The expression bears witness to a religious sense of mission that was ready to use violence to achieve its goals. According to the model of a just war , military force aimed at defending or recapturing unlawfully appropriated territories was considered morally justifiable and even considered to be God's will. The crusade as a war of the papal church was - so the intention of the expression - waged in the proxy of God.

DEUS LO VULT in large Latin letters is also the leitmotif of the knightly order of the Holy Sepulcher in Jerusalem (order abbreviation "OESSH").

In retrospect, the expression Deus lo vult shows - according to its critics - that the appeal to the will of God was often misused for inhumane purposes. In the criticism, e.g. B. by Radulfus Niger , the call for Deus non vult .

Today this slogan is used by some right-wing groups and can be found together with the coat of arms of the OESSH on posters at demonstrations by Christian-patriotic groups in Poland, e.g. B. at the march on the anniversary of Polish independence.