Manifesto of the Duke of Braunschweig 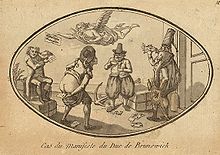 The fall of the Duke of Braunschweig's manifesto. French caricature from 1792

The Manifesto of the Duke of Brunswick (French: Manifeste de Brunswick , also Koblenz Manifesto ) is an appeal to the French people, during the First Coalition War, by the Commander in Chief of the Prussian troops, the Field Marshal and Duke of Brunswick and Lüneburg , Karl Wilhelm Ferdinand of Braunschweig Wolfenbüttel , was addressed to the Parisians on July 25, 1792 . With a mixture of concessions and threats, it was intended to persuade the French to submit to their king again. In particular, it gave notice in the event of violence against the royal family and the royalTuileries Palace bloody retribution including the destruction of Paris. However, the manifesto achieved the opposite of what was wanted, radicalized the French and triggered the Tuileries storm on August 10, 1792.

On April 20, 1792, King Louis XVI. before the National Assembly the declaration of war on the "King of Bohemia and Hungary", the Emperor Franz II . The king, locked in the Tuileries, played a double game, because at the same time he secretly sent the journalist Jacques Mallet-du-Pan to Frankfurt and had the emperor and the German princes informed that he wanted to use the conflict as an opportunity to restore his power. Due to mutinies against the aristocratic commanders, the war started badly for France.

The King was carefully informed by Count Caraman of the Prussian troops advancing on Paris since May 12th. Although the details of this conspiracy remained unknown, it was rumored that the rulers were betraying the nation. On June 20, 1792, an angry crowd stormed the Tuileries for the first time and only withdrew after a long discussion with the king. Queen Marie Antoinette kept herself up to date through secret correspondence with her confidante Hans Axel von Fersen . The baron wrote to her on July 10th that “there is“ no other cure for so much horror than a very harsh and very threatening declaration by the foreign powers that Paris or any other city in the kingdom would be held responsible for the safety of the royal family. “On July 26th, he assured her that he had asked for the manifesto to be formulated as sharply and threateningly as possible. On July 28th he received the final version of the document

The design came from the French Count Jérôme-Joseph Geoffroy de Limon, who had fled to Koblenz before the French Revolution and was in secret contact with the royal family. Although the Duke found the text too sharp, he nonetheless allowed it to be circulated on his behalf.

The manifesto at the Fürstentag in Mainz

On July 14, 1792 in place Frankfurt , the coronation of Emperor Franz Joseph Karl von Habsburg , Archduke of Austria as Francis II. Place. The newly crowned Emperor of the Holy Roman Empire of the German Nation traveled to Mainz shortly after his coronation. From July 19 to 21, 1792, a splendid Prince's Day was held there in the Favorite Palace, which included the main political actors Franz II and King Friedrich Wilhelm II of Prussia, numerous other German princes and diplomats. The host was the Elector of Mainz, Friedrich Karl Joseph von Erthal . The Duke Karl Wilhelm Ferdinand von Braunschweig, who was present in the entourage of the Prussian king, presented the manifesto to the rulers there, which was printed in the electoral printing house in Mainz, and which was then jointly adopted.

In the meantime, on July 11, 1792, the National Assembly had declared “the fatherland in danger”. On July 24th, Marie Antoinette wrote on Fersen, the king and she awaited the announced manifesto "necessarily with the greatest impatience, it will gather many people around the king and bring him to safety."

The manifesto was published on July 25, 1792, and on August 3, it was also published in Paris in the Gazette nationale . General outrage ensued, and the king had to make a statement assuring that he would do everything to ensure that France prevailed in the war. However, his words were ineffective; instead, all sides called for the king to be deposed.

The manifesto was taken by the angry French people as evidence that the king was collaborating with the Allies, and thus achieved the exact opposite of the intended effect. On August 10, 1792, Parisian sansculottes and other insurgents from the French provinces stormed the Palais des Tuileries again on behalf of the Commune de Paris . The battle with the Swiss Guards deployed as guards claimed around 1,000 deaths. The insurgents triumphed and took the royal family as prisoners in the Temple , a former fortress of the Knights Templar , where they were closely guarded.