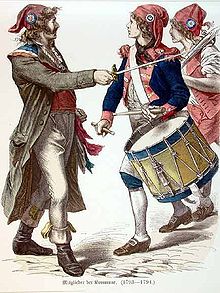 Members of the commune . Colored engraving from 1912. You can see men with cockades , in Jacobin hats and in long trousers ("without culottes ") 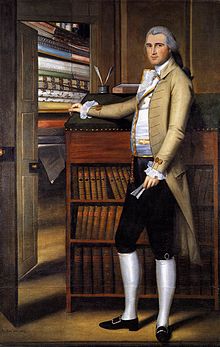 For comparison, knee breeches or culottes ( Elijah Boardman on a painting by Ralph Earl , 1789)

As sans-culottes (also dt. Sansculottes from French. Without breeches , culotte ) were in the time of the French Revolution called the Paris workers and petty bourgeois (1789 to 1799), who wore unlike the worn by nobles knickerbockers often long trousers. The sans-culottes became politically influential because they supported the Jacobins , but they had different political goals.

Sans-culotte was initially a mockery, but quickly developed into the common name for the revolting early proletarians who intervened in the events of the revolution. Often one recognized the sans-culottes by the Jacobin cap (a Phrygian cap ) and the mutual address as citoyen - "citizen" instead of the previous monsieur - "my lord".

During the years of the Revolution, the sans-culottes quickly established themselves as a fixture. They consisted mainly of the petty bourgeoisie and workers and represented the actual rule of the people.

They were politically organized in the sections of Paris and in the parish council of the city of Paris. From here popular uprisings were organized again and again. B. the uprising of the Parisian sans-culottes from May 31 to June 2, 1793 .

During the reign of terror in 1793/94, the sans-culottes supported the Jacobins because they saw their demands for social justice realized here. The Jacobins had set maximum prices for food in order to secure supplies for the army and the population during the First Coalition War . This secured the livelihood of the sans-culottes. In addition, the constitution of 1793 , which was never implemented, provided for state support for the poor and a state school system, which affected the elementary interests of these lower classes.

On the other hand, political activity in the sections was restricted during the reign of terror. When maximum wages were introduced in the summer of 1794, Jacobins and sans-culottes parted ways. When Robespierre fell on the 9th of Thermidor , only a few sections sent their fighters to save the Jacobin rule. Thus the reign of terror came to an end, but at the same time the sans-culottes lost their political influence.

In the uprisings during the Germinal and in the Prairial Uprising of 1795, the sans-culottes again demanded bread and the constitution of 1793.

With a decree of October 5, 1793, the 5 or 6 supplementary days in the Republican calendar were named after the Sans-culottes, the Sans-culottes . They were roughly between September 17th and 23rd each year.