The prairial uprising took place from the 1st to the 4th prairial of the year III. according to the French revolutionary calendar (May 20 to 23, 1795) in Paris after the fall of Robespierre and the takeover of power by the Thermidorians . It was one of the last great popular uprisings of the French Revolution and, in addition to political, primarily social backgrounds. 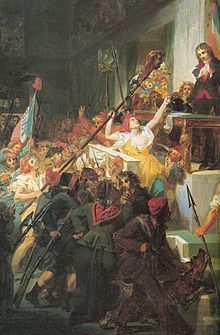 Presentation of the head of MP Féraud at the National Convention, detail from a painting by Félix Auvray

After the fall of Robespierre , the end of the reign of terror and the beginning of the rule of the Thermidorians, the social and economic crisis increased. Inflation increased with the end of dirigiste economic policy. The maximum law to limit prices was repealed at the end of December 1794. This was exacerbated by poor harvests. Food prices rose sharply. There was a real famine, especially in the poorer districts of Paris. Against this backdrop, the luxurious lifestyle of the new elites aroused displeasure. The social revolutionary ideas now regained support among the poorer classes. During this time, Gracchus Babeuf developed seemingly communist ideas.

This was one of the triggers for several uprisings in Paris. A pamphlet spoke of a popular uprising for bread and justice . The observance of the democratic constitution of 1793 , the arrest of the ruling Thermidorians, the release of political prisoners and new elections were demanded. It was promoted for a march of the armed sections to the National Convention and for fraternization with the soldiers. The motto was: Bread and the Constitution of 1793!

A first uprising took place on the 12th Germinal III. (= April 1, 1795). A crowd from the suburbs went to the National Convention. They could put forward their demands. The government forces were strong enough to disperse the crowd. A day later, numerous sans-culottes were disarmed. Numerous MPs from the Mountain Party were arrested.

A few weeks later it came between the 1st and 3rd Parial III. (= May 20-23, 1795) to another uprising. At its peak, around 40,000 people took part. This was possibly better planned in advance than the first uprising by those who had already been arrested from the prisons. However, a coordinated approach was lacking in the course of the process.

On the morning of the 1st Prairial, the storm bells were rung in various suburbs and districts of Paris and around noon, columns of protesters marched towards the inner city. Slogans were bread or death and bread and the constitution of 1793. The national convention declared the leaders to be lawless. The welfare and security committee decided to mobilize line troops and the national guard around noon . However, some of the National Guards joined the rebels. In the afternoon, the demonstrators arrived in front of the National Convention. The MP Jean Féraud wanted to stand in their way. He was killed, his head stuck on a pike and presented to the President of Parliament François-Antoine Boissy d'Anglas . Under the pressure of the crowd, MPs were forced to comply with various demands. National Guard units loyal to the government arrived just before midnight and pushed the crowd out of the hall.

The National Convention responded by issuing an arrest warrant for fourteen members of the Mountain Party who were accused of supporting the insurgents. The next day the convention had mobilized not only line troops but also section battalions. Parts of them went over to the insurgents, forcing the Welfare and Security Committee to negotiate with them. After individual MPs rushed to the demonstrators and promised them that supplies would be ensured, the rebels withdrew to the suburbs.

The government regained the initiative over the next two days. She wanted to take action against the core of the uprising in Faubourg Saint-Antoine with reliable troops . 20,000 men were drawn together under the command of General Jacques-François Menou . A first advance by a small group of Jeunesse dorée on the 4th Prairial failed because of the barricades of the residents. The rebels were given an ultimatum, which they in turn responded to by mobilizing their forces. When the government troops marched up by the thousands, the insurgents gave up.

After the defeat of the insurgents, the National Convention responded with tough countermeasures. Many opposition MPs were arrested. Carnot was spared . 1200 people were arrested in the Paris sections and many others were disarmed and stripped of their civil rights. Tens of thousands of radical democrats were arrested across France.

A court martial gave 77 judgments. 36 of them were death sentences. Some convicted MPs attempted to take their own lives before the execution. Some succeeded, others were dragged to the guillotine , dying . The citizens were asked to surrender their weapons and since the uprising the National Guard has been reorganized in such a way that the poor were hardly called up. As a result, the military became increasingly important as a power factor. The circle around Babeuf went underground. His conspiracy of equals failed that same year.