The term Jeunesse dorée (French: 'gold-plated youth') comes from French and, according to Duden , stands for youth who originated in the rich upper social class and whose lifestyle is characterized by luxurious pleasures.

The roots of the term can be found in the activities of post-revolutionary, reactionary, young men from the predominantly lower strata of the Parisian, French bourgeoisie , also called Muscadins , the persecuted nobility and also the nouveau riche stratum of army suppliers who came after the end of the Terreur and the execution Robespierres (1794) appeared as opponents of the Jacobins . Under the leadership of the journalist and newspaper editor Louis-Marie Stanislas Fréron , the young monarchists, armed with clubs, fought against the Jacobins. The battle song of Jeunesse dorée , published in 1795 by Jean Marie de Saint-Mars Souriguiere , Réveil du peuple ('Awakening of the People') sung to a melody by Pierre Graveaux , almost reached the importance of the Marseillaise .

Caricature of an Incroyable and a Merveilleuse

The 19th century French politician and historian Adolphe Thiers (1797–1877) described them as follows:

“... They now united themselves in a common cause with those youthful enemies of a wild democracy , spurred their zeal and made politeness, fine manners and chosen clothing their law. So fashion began to swing its scepter again. The hair was again fastened in braids on the back of the head with a comb, a custom borrowed from the military, who used to tie their hair in this way in order to weaken the blows of the sword from behind. […] In addition, one had to wear high cravatten, black or green collars in the style of the Chouans and above all a mourning ribbon around the arm, as it were as a relative of some victim of the revolutionary tribunal. "

When the First French Republic had established itself, the youth of both sexes also made the dawn of a new era clear through dodgy plastering. They took contemporary English fashion to the extreme and did not shy away from making absurd modifications. To be a Muscadin, Incroyable, and Merveilleuse was considered most honorable. The former were also the "youthful thugs" of the Thermidorians who attacked sans-culottes and Jacobins in public. 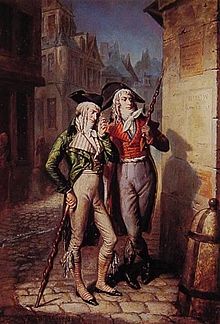 Two muscadins with clubs, called Constitution by them

In the film of the 1950s, the term became the epitome of a socially irresponsible, urban youth culture . The mostly moralizing stories often address the pointlessness of life in idleness. In Les tricheurs ( Marcel Carné , 1958) the life of a clique of young people revolves around idleness, revealing sexuality and boredom crime until one of them dies in a sports car. Mostly Federico Fellini's Das süße Leben (1960) is also assigned to the cinematic cultural criticism of the meaningless, pleasure-oriented life of the Jeunesse dorée .