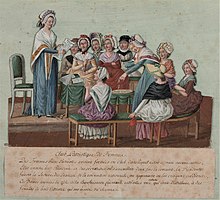 As tricoteuses ([ tʁikɔtøːz ], French ; "knitters") political activists from the circles of the sans-culottes were called during the French Revolution , who appeared in the places of revolutionary events and militantly supported the positions of the Jacobins and Enragés . 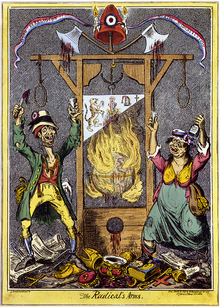 The concept of revolutionaries as knitters can be traced back to a decree of the secretary of the Paris Commune, Pierre-Gaspard Chaumette , of December 22, 1793:

“The Council notes that the patriotic citizens of October 5th and 6th will have a specially marked place at all civic celebrations and that in front of them there will be a banner that reads on the triumphal arch of the boulevard: 'How a They hunted the tyrant ahead of them 'and' Women of October 5th and 6th '. And they will participate with their spouses and children and they will knit. "

The term is also associated with the image of women knitting in the stands of the National Convention , who honored the principle of publicity in its meetings, loudly supported Maximilien de Robespierre and are said to have received 40 sous a day for it. The appearance of the tricoteuses at the foot of the guillotine made a particularly striking impression . The executioner of Paris, Charles Henri Sanson , described this in his memoirs:

“The same spectators always came to the place of execution, essentially radical sans-culottes from the Faubourgs Saint-Antoine and Saint-Marcel : craftsmen, small tradesmen, in short, people from the people who were characterized by their drastic language and uncomplicated behavior - the revolutionary ' You became a common form of address here early on. The women from this milieu were the notorious tricoteuses, who sat with their knitting on benches at the guillotine and cracked jokes while they waited for the convicts; when the opportunity arises, they also sell out to passers-by, if they only looked aristocratic. "

During the French Revolution 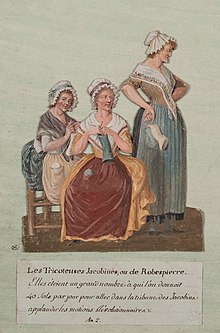 Tricoteuses in a contemporary depiction by Pierre-Etienne Lesueur.

In order to be considered a tricoteuse, a woman did not have to accompany her political activity with knitting in every case, the name went beyond its actual meaning. Like the Poissardes ("fish women") on the train to Versailles on 5./6. October 1789 and the blanchisseuses ("white washerwomen") of the price riots on February 25, 1793, who also came from the petty bourgeoisie or the working class and - as Chaumette's decree indicates - were at least partially identical with them, the tricoteuses stood for the overthrow in an outstanding way because, in addition to the old order, they also threatened the gender order , which even the revolutionary authorities did not question and which were expressly protected with the ban on women's political associations on October 30, 1793.

In literature and historiography, knitting was originally interpreted as a means to pass the time and, as a typical activity of female privacy, marked the ditch to the right to participate in male public space. By making their private activities public, women claimed participation in society. Gender studies meanwhile interpret knitting as punctuation in male-dominated areas. As a gender-specific social practice transgressed into the realm of revolutionary symbolism, the female world of life and work placed itself as the object and agent of politics from which women were excluded due to a lack of voting rights.

Since knitting through the left and right stitches is binary , the technique is suitable for transmitting binary codes, such as Morse code , in which the right and left stitches correspond to the short and long signals.

In the first World War

Belgian and French agents engaged in underground warfare by knitting under the eyes of the German occupation. The French spy Louise de Bettignies , whose code name was Alice Dubois, used the Alice Network , which consisted of around 100 agents and also included knitters, to prevent the Germans from advancing. She grew up bilingual and worked from Lille for the British secret service. She tied women into her network who lived near train stations or rail transhipment points in order to have the tracks observed. The transmission of information about incoming and outgoing trains, with different knitting stitches differentiated according to the type of trains, should provide the military with information about planned steps by the Germans. Knitting as a coding technique had the advantage that it could be done inconspicuously at the window over a longer period of time. The work was then smuggled into the headquarters.

In the American War of Independence

In the American Revolutionary War , knitting was also used as a camouflage. Molly Old Mom Rinker spied on the British on behalf of George Washington . She sat on a hill, pretended to knit, watched the enemy lines and kept throwing notes with information hidden in balls of wool down the slope where American soldiers were hiding.

The female sans-culottes found a permanent place in anti-revolutionary and restorative writings as Tricoteuses de Robespierre ("Robespierres knitting women") and Furies de la Guillotine ("revenge goddesses of the guillotine") , for which they "formed one of the most dangerous and disgusting elements of revolutionary excitement". In anti-revolutionary mythology, the "knitters" left behind an often distorted fantasy image of bloodthirsty monsters as a counter-image to the supposedly natural order in which women fulfill their role as loving mothers and wives without ever becoming politically active in public.

To this day, the term in French and English is metaphorical for a woman with a radical political stance. The tricoteuses can be found again and again in literature and art. Louis-Sébastien Mercier described their story in the second episode of the Tableau de Paris , Charles Dickens drew the self-destructive main character Thérèse Defarge as a tricoteuse in his novel A Tale of Two Cities , who is driven by an inexorable desire for revenge on all aristocrats and other opponents of the revolution . She takes the names of the next guillotine victims in coded form into the pattern of her knitting.

In Mel Brooks ' film History of the World , the figure is recorded where Madame Defarge, who handles her needles even without wool, is the head of the revolutionary conspiracy. Ian Fleming uses the role cliché of the Tricoteuse several times in his novel From Russia, With Love (1957) to characterize James Bond's opponent, the Soviet agent Rosa Klebb: In the last chapter, which is also explicitly entitled La Tricoteuse , Klebb (disguised as an aristocrat) tries eventually even to get rid of Bond with poisoned knitting needles . In David Bowie's song Candidate from the album Diamond Dogs , the line of text I smell the blood of les tricoteuses appears . Director Christopher Nolan recorded knitting as an act of revolt in his Batman film The Dark Knight Rises (2012): In a show trial against Police Commissioner Jim Gordon, the terrorist knits Bane and gleefully watches the illegal events.