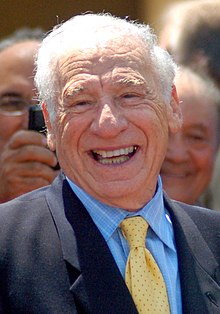 Mel Brooks (* 28. June 1926 as Melvin Kaminsky in Brooklyn , New York ) is an American comedian , actor , director , theater producer and Oscar -prämierter screenwriter . He was best known for his cinematic parodies of commercially successful films such as Frankenstein Junior and Spaceballs . He also made a name for himself with parodies of the Nazi regime , especially Adolf Hitler (e.g. Spring for Hitler and the remake of Being or Not being with the title song To be or not to be ). Brooks is Jewish ; his father Maximilian was a German Jew from Danzig , his mother Kate, b. Brookman, Jewish woman of Russian origin. Mel Brooks is one of the few artists to have been honored with the four most important awards in the US entertainment industry ( Grammy , Oscar, Tony Award , and Emmy ). 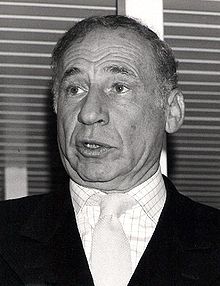 Mel Brooks with Anne Bancroft at the Emmy Awards, 1997

Mel Brooks with his son Max Brooks in April 2010

Mel Brooks' career began as a stand-up comedian after World War II . He was discovered by the comedian and television star Sid Caesar (1922-2014); he hired him as a sketch writer. During this time Brooks also met Carl Reiner , with whom he recorded several comedy records from 1961 onwards. In 1965 he created the television series Mini-Max together with Buck Henry . The success of this series enabled Brooks to find a producer for his first feature film Spring for Hitler (The Producers) in 1968 . Despite the daring subject matter - a worn-out Jewish Broadway producer tried to cheat with a musical about Adolf Hitler - the film was a surprise success that earned Brooks an Oscar for Best Original Screenplay. In 2001, a musical version of The Producers premiered on Broadway in New York and won twelve Tonys . A film adaptation of the musical was released in late 2005.

After the success of The Producers , Brooks turned to a traditional comedy offense with Die 12 Stühle , before proving himself a specialist in genre parodies as the director of Der wilde wilde Westen (Blazing Saddles) and Frankenstein Junior (Young Frankenstein) in 1974 . As a moronic governor in The Wild Wild West , Brooks also appeared for the first time in a larger role as an actor . In the following films, Brooks appeared more often as a leading actor, director and screenwriter. His films parodied Hitchcock films ( Höhenkoller ) , science fiction ( Spaceballs ) or the revival of the Robin Hood films ( Robin Hood - Heroes in Tights ) of the early 1990s. On the side, Brooks also produced - for him atypical - films such as The Elephant Man by David Lynch or the remake of the science fiction classic Die Fliege by David Cronenberg .

Since the moderate success of his Dracula parody Dracula - Dead but Happy in 1995, things have become quieter for Brooks. He only appeared in smaller guest roles like in the television series Crazy About You , until he surprised Hollywood with the success of the musical version of The Producers . In October 2007, another musical by Mel Brooks, this time based on his horror film parody Frankenstein Junior , premiered on Broadway. The reviews were mixed; Young Frankenstein couldn't match The Producers' success . In 2008 he had the animated series Spaceballs: The Animated Series produced. He did a role (President Skroob), sang the theme song, but did not direct. The success was limited.

Mel Brooks and the actress Anne Bancroft (1931-2005) married in 1964; Bancroft died on June 6, 2005 after suffering from cancer. It was the second marriage for both of them. The two have a son named Maximilian , who works as an author ( Operation Zombie: Who Lives Longer, Is Dead Later ), among other things .

At the beginning of March 2009, Brooks was awarded the Ernst Lubitsch Prize by the Berlin Film Journalists' Club in recognition of his services . In April 2010 Brooks was honored with a star in the film category (6712 Hollywood Boulevard ) on the Hollywood Walk of Fame . He received the AFI Life Achievement Award from the American Film Institute in 2013 . On September 8, 2014, Mel Brooks immortalized himself with his hand and shoe prints in the cement floor in front of the TCL Chinese Theater in Hollywood. The comedian made fun of it and had an artificial sixth finger on his left hand.

Brooks has worked with some actors more often. Particularly known:

1968: Best Original Screenplay for The Producers ( Spring for Hitler )

2009: Honorary Ernst Lubitsch Prize - for his musical The Producers - Spring for Hitler

In the German versions of his films, Brooks was often dubbed by Wolfgang Völz . Völz was chosen by Brooks himself as his voice actor.