David Paul Cronenberg (born March 15, 1943 in Toronto , Ontario ) is a multi-award-winning Canadian film director . While his early work can mainly be assigned to experimental , horror and science fiction films , the focus in his later works is primarily on film drama and literary adaptations . His best-known works include Die Fliege , Naked Lunch and, more recently, A History of Violence .

Cronenberg was born the son of a musician and a writer in Toronto. His Jewish grandparents were all from Lithuania . He attended the North Toronto Collegiate Institute and enrolled first in the natural sciences at the University of Toronto in 1963 . He later switched to the fields of English language and literature and obtained his degree in 1967 with a “Bachelor of Arts”. Influenced by William S. Burroughs and Vladimir Nabokov , he initially tried unsuccessfully as an author. Only when he saw a film made by fellow students did he want to become a filmmaker himself.

From the late 1960s, Cronenberg began making his first experimental short and feature films. Although impressed by directors such as Federico Fellini and Ingmar Bergman , he denied the influence of film history on his work and instead referred repeatedly to Burroughs, Nabokov and existentialism . In the explicit works Parasiten-Murderer (1975) and Rabid - The Roaring Death (1977), which incorporate elements of horror and science fiction films, physical horror was in the foreground. With Die Brut (1979), his "most autobiographical" film, Cronenberg began to combine psychological and physical horror. The brood also marked the first collaboration with composer Howard Shore , who has since been part of Cronenberg's permanent staff that the director has gathered over the years, including film editor Ronald Sanders and cinematographer Mark Irwin , who was replaced by Peter Suschitzky in 1988 .

Cronenberg had his first major commercial success with Scanners - Your Thoughts Can Kill (1981), another with Die Fliege (1986), a remake of the 1958 film of the same name . With Die Unzertrennlichen (1988), which he counted as one of his more personal works alongside Die Brut and Die Fliege , the extreme portrayal of physical deformations in his films increasingly faded into the background. In terms of content, the emphasis shifted from the horror and science fiction genre to the film drama , and most of the subsequent works were no longer based on his original scripts, but based on literary models. Naked Lunch (1991) was based on a book by Cronenberg's favorite writer Burroughs and was the first collaboration with renowned producer Jeremy Thomas .

His award-winning films include Crash ( Cannes 1996) and eXistenZ ( Berlinale 1999). On 28 September 2007 Cronenberg received as part of the Hamburg Film Festival in the performance of his work Eastern Promises - Eastern Promises the Douglas Sirk award in 2007 as a director, "turns the consistent cross-border, irrational, disturbing films. Partly applauded and partly panned by the public and by the critics , it provokes a healthy polemic that always benefits the cinema - like all arts. "(Director Albert Wiederspiel ) 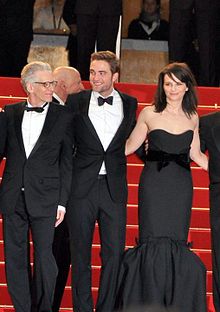 In 2012 he presented the drama Cosmopolis , which is based on the novel of the same name by Don DeLillo . The film earned him his fourth invitation to the competition at the Cannes International Film Festival . In 2014 he published his novel Verzehrt . In 2018 he was the jury president of the Neuchâtel International Fantastic Film Festival .

In addition to movies, Cronenberg also made television and advertising films. In addition to his directorial work, he appeared in small roles and cameos , for example in 1990 in Clive Barker's Cabal - The Brood of the Night .

His sister Denise Cronenberg was involved in a dozen of his films as a costume designer.

After more classic horror films in 2004, Rüdiger Suchsland from film-dienst sees Cronenberg as a “master of subtle horror” between the poles of fear, social criticism and deformation of the body. Cronenberg in response to Suchsland's question about his worldview: “The basis is an existentialist view of reality. That means: there is no absolute reality. There are only one or two facts about life - one is death, another is life. In between we have to invent and produce everything ourselves. The responsibility for this is entirely our own - no one takes it for us. There are no rules other than those we make up ourselves. [...] That is terrifying and exciting at the same time. "