Mühlberg (three of a kind)

Mühlberg is a typical cluster village in the eastern district of Gotha in Thuringia . Together with Arnstadt and Großmonra , it is the oldest documented place in Thuringia. Since January 1, 2009, the formerly independent municipality has been part of the rural municipality of Drei Gleichen .

Mühlberg is located in Central Thuringia on the southern edge of the Thuringian Basin in the area of ​​the Drei Gleichen at an altitude of 290 m above sea level. NN halfway between Arnstadt and Gotha. South of the village rises the plateau of the Ohrdrufer Platte, an average of 450 meters high, which today is mainly used as a military training area. The Thuringian Basin and the foreland of the Thuringian Forest are delimited by the Eichenberg – Gotha – Saalfeld fault zone, which is visible as two ridges near Mühlberg . These are the Rhönberg and the Kaffberg with the castle hill of Gleichen Castle and the Schlossleite , on the northwestern end of which the Mühlburg was built and which ends at the fortress Wachsenburg in Holzhausen .

Mühlberg is traversed by the Weidbach , which in earlier centuries operated the mills of the village , reinforced by the water of the Mühlberger Spring . It is created by the union of the Saugraben and Schnepfthal streams in the Gänseweide in the southwest of the village and takes in the Burgbach in the center, which rises in the neighboring village of Röhrensee ( horse fountain ). The Weidbach flows around the Burgberg, past Sülzenbrücken and flows into the Apfelstädt in Neudietendorf . 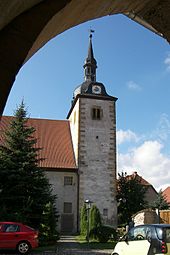 North side of the Church of St. Luke

On May 1, 704 Mühlberg was mentioned as Mulenberge together with Arnstadt and Großmonra in a deed of gift from Thuringian Duke Hedan II to the Anglo-Saxon Bishop Willibrord of Utrecht . 740 Boniface traveled through the place. In 1130 the Archbishop of Mainz Adalbert I acquired the location. In the 13th century, Count Meinhard founded a mint in Mühlberg . It was renewed in 1530 by the Archbishop of Mainz, Johannes I. In 1242 the place received market rights . The city ​​of Erfurt acquired the village from Mainz property in 1357 . In 1517, just seven years after Martin Luther's theses were proclaimed , Mühlberg took over Protestant teaching. In 1525 44 Mühlbergers moved to Erfurt and demanded their rights, Hans Hayder, the peasant leader, was beheaded. The plague raged in Mühlberg from 1536 to 1538.

In the course of the following centuries the ownership changed frequently. In 1665 the people of Kurmainz became owners again. A major fire in 1709 destroyed 151 houses, 104 barns and 109 stables. Another fire in 1734 destroyed 115 houses, 97 barns and 215 stables. 1746: 53 buildings burned down. , Demonstrating the importance of Orftes that there are six in Mühlberg 1775 free farms were. In 1802 the Mühlberg exclave became Prussian in the course of the Reichsdeputationshauptschluss and between 1807 and 1813 it belonged to the French Principality of Erfurt . With the Congress of Vienna the place with the neighboring places Röhrensee, Ringhofen, Wandersleben and the castle Gleichen became part of the administrative district of Erfurt , district of Erfurt, as an exclave .

After the land consolidation in 1822, peat cutting began in Apfelstädter Ried in 1825 . In 1651, Duke Ernst the Pious from Gotha issued a fire armament regulation, according to which the places in the duchy had to provide their own fire brigades. As a result, the fire brigade was founded in Mühlberg in 1875. The town hall burned down in 1894. In 1899 the former springmill was converted into a wood goods factory. A dairy was founded in the premises of the Vorwerk in 1904. Further historical dates worth mentioning are the founding of LPG Type III (1953), the 1250th anniversary celebration and the founding of the Heimatbund (1954), inclusion of the location in the model project "Urban Renewal of Federal and State" (1990), renovation of the town hall (1993 ), Completion of the complete renovation of the Vorwerk and the culture barn (1999).

Only with the reorganization of the state in 1945 Mühlberg came to the state of Thuringia and has since been part of the district of Gotha. In 1952 this became part of the newly formed Erfurt district , which lasted until the state of Thuringia was re-established in 1990. On May 21, 1992, the community merged with the neighboring communities of Grabsleben , Seebergen and Wandersleben to form the Drei Gleichen administrative community. From this merger, on January 1, 2009, the community of Drei Gleichen was created. The last mayor before the dissolution was Karsten Ullrich (CDU), who is now the mayor of the district.

Blazon : “In red a silver castle standing on a green mountain with a tinned tower in the middle, accompanied on the right by a silver mill wheel, on the left by a silver six-spoke wheel; the mountain is covered with a silver wave bar. "

Mühlberg is considered the oldest municipality in Thuringia and the new federal states; it was first mentioned in the year 704. The coat of arms depicts the Mühlburg, one of the three equals. The Weidbach, which flows through the town, is indicated by a wave bar. The silver six-spoke wheel, which is also an expression of the historical trade route leading through the town, indicates that Mühlberg was part of the Erfurt countryside. Finally, Mühlrad and Berg stand for the folk etymological interpretation of the place name.

The coat of arms was designed by the Erfurt heraldist Frank Diemar .

The most important economic sectors for the place are agriculture, small businesses, handicrafts and tourism. The largest farms are

There are also seven restaurants, pensions and private quarters available.

Town hall in 2011 (at that time still with linden tree)

Town hall in August 2017 without linden tree; it had to be felled because it had not expelled after being struck by lightning.

The remaining stump of the linden tree on the market

The motorway junction Wandersleben on the Mühlberger municipality, on the left the Mühlburg

Mühlberg is on the L1045 road from Arnstadt via Holzhausen (here is the Wachsenburg ), Röhrensee, Wechmar , Günthersleben to Gotha . There is also a road connection to Wandersleben, 4 km to the north. The nearest train station is there. The A4 motorway with the Wandersleben junction runs right on the northern edge of the village .

There are several regular bus connections from Mühlberg , including those to Erfurt, Gotha and Arnstadt. Since April 2008, the place belongs to the area of ​​the network tariff Central Thuringia .

The Mühlbergers call themselves and are called Cameroonians by the residents of the neighboring communities . The reason is (currently) not known.

Districts of the community of Drei Gleichen