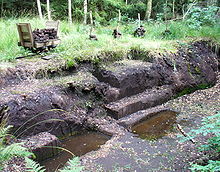 Peat cutting in the Wurzacher Ried

As peat or peat the above-ground mining of will Peat called. This organic material, which arises from dead plants in moors due to the incipient coalification , is used as a low-energy fuel to improve soil aeration in horticulture and, to a lesser extent, for the production of textile fibers and for medicinal purposes .

Peat extraction has declined sharply in recent decades for several reasons. On the one hand,  the water table in the wetland has to be lowered by ditches - and in some fens also by pumping out - in order to drain the bog before the peat can be cut. Since it was recognized that raised bogs in particular have an important regulatory effect on the water balance due to the large amount of precipitation that they can absorb, the result was persistent costs and persistent disadvantages from drainage . Second, conservation has become more important over time, and most species of bog flora and fauna are considered threatened or critically endangered. Since significant amounts of carbon are stored in bogs and these are released again through peat extraction, it would be beneficial for climate protection to rewet the soil and thus preserve the peat. Thirdly, efforts are being made today to preserve original habitats in the interests of landscape protection . And last but not least, peat extraction is no longer economically viable today because, on the one hand, the large peat bog areas, which are worthwhile on an industrial scale, have now been peated and, on the other hand, other high-energy fossil fuels have largely taken over the function of peat.

Moors grow extremely slowly, an intact body of peat only increases in thickness by one millimeter per year, which means it takes 1000 years to produce a single meter of peat. Because of this slow growth, bog areas recover only very slowly, even after attempts at renaturation . Therefore, nowadays the approval of new peat cut areas is handled very restrictively and with strict requirements.

For the same reasons, the use of peat in horticulture has been increasingly criticized in recent decades, because hobby gardeners spread over two million cubic meters of peat in their gardens every year. In addition, peat can improve the aeration of the soil, but the soil quality itself is deteriorated because peat is extremely poor in nutrients and it promotes soil acidification .

The growing environmental awareness of the population is causing the peat industry in some European countries to rewet some of the former mining areas in order to regenerate at least smaller bog areas.

In the temperate climate zone , peat cutting has been around since around 3000 BC. Demonstrable. Before peat could be cut, the moor had to be drained through a branching system of ditches and developed through a system of intermediate dams with paths between the peat cutting and peat kiln . When making a peat cut, the moss peat was first removed by the peat farmers with a spade , then the white peat underneath was dug with a shovel . The deeper lying brown peat was cut into sod with sticks or chisels and also called "baker's peat" after the main customer. This peat cutting was extremely physically demanding work. The award-winning feature film Freistatt from 2015 provides a fictitious, yet vivid idea of ​​the hardship of work in the bog . The peat sods were loaded onto peat carts and mostly pulled to the drying area by children. There it was piled up in such a way that the rainwater could run off the outer walls. The peat dried all summer, and by late autumn not only was it considerably lighter, but its volume also shrank significantly.

Because of its high calorific value , the bottom black peat was the most valuable. If the peatland was not adequately drained, it was extremely difficult to dismantle because the peat cutters had to lift it in a semi-liquid state from the peat pits up to six meters deep. The black peat mud was evenly distributed on the drying area and “petted” by trampling with the feet. When most of the water was pressed out in this way, the black peat was left to dry and was then cut into sod.

In Western Pomerania, peat extraction began later than in the described areas of Lower Saxony and Schleswig-Holstein, as there was still enough firewood in the vast forests. Peat was then extracted by hand pricks, which can no longer be recognized today, as they renatured themselves again due to the shallow depth.

From around 1800, manual work in peat cutting was increasingly replaced by machines. As with digging by hand, mechanical peat extraction requires the soil to be drained. In front of the peat excavators, the bunker removed the topmost 50 cm thick layer of plants, possibly humus and white peat, the overburden was moved into the putt in previous years. With the help of peat excavators , the black peat was then extracted, pressed and cut into sod. The turning of the drying sod was increasingly done by machine, as was the collection of the dry peat. After the black peat had been extracted, the “pitted” peat area was worked with deep plows in order to mix the peat remains with the layers of sand below. After this trench the soil was easier to recultivate.

The large deposits of peat in the Peene river valley in Western Pomerania were used commercially from the 19th century. This is to be demonstrated using the example of peat production in the Gützkow area . In 1844 the city bought the first peat cutting machines, but they could not be used effectively because of the difficult conditions. The peat layers are up to ten meters thick, and the river moor could not be properly drained back then. So in 1856 the preparation of the production areas began with a planned project (see picture - plan drawn on linen 1 × 2 meters). Sand masses were extracted from the high bank areas, which were then heaped up to form dams, while trench systems were created at the same time. The excavated layers of earth, including the upper layers that could not be used for the mining areas, were also used for the dams. Now the machines could be used. Mining depths of six to eight meters are known. A distinction was made between green peat, dry peat and pressed peat. The green peat was briefly air-dried peat, dry peat was longer dried peat in barns and sheds. Presstorf was machine-pressed peat that looked like briquette. The water had been squeezed out of it and the peat had been heavily compacted. In 1922 1000 pieces of green peat cost 40 RM . Gützkow already had five machines at the time.

In neighboring peat cut areas, polders were first diked and shortly before 1900 wind pumps were installed to pump the water out of the areas.

In Pomerania, coal was hard to get for private households and hardly to pay for. So peat was the only fuel. It stayed that way after 1945. In 1947 a peat cooperative was formed in Gützkow, employing 40 to 50 people. It was not until 1959 that the cooperative was dissolved and peat extraction stopped. Around 1950 1000 tons of green peat, 1200 tons of dry peat and 1800 tons of pressed peat were produced annually - only for heating purposes. 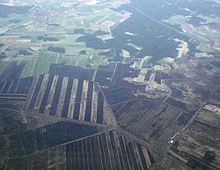 For around 4,000 years, moorland areas in Central Europe have been subject to more or less intensive use. Burning peat has been extracted since the beginning of the Bronze Age , and in the form of air-dried sod, it may have formed the basis of the copper and tin smelting for bronze production.

From early sources (e.g. Pliny ) we know that peat has been used as fuel for a long time, especially on the North Sea coast (due to the large coastal bogs and the lack of suitable alternatives) . The heat yield is less than that of lignite , but better than that of wood. The use of peat only began to a larger extent with the shortage of wood from around 1750 until it was gradually replaced by coal firing around 1900.

In the mountainous regions of Europe, peat digging was less important than in the plains, presumably because the pine trees meant that there was enough fuel that was easier to extract. Peat was cut as a by-product of the draining of damp meadows and used in agriculture as litter in the stables; only in times of need it served as an inferior fuel.

The cut peat was partially processed into peat charcoal , the process is the same as for the extraction of charcoal . Peat coal has a calorific value of more than 20  MJ / kg, so that it was even used for ore smelting when there was a shortage of charcoal. After the forests that were cleared during industrialization were reforested , the demand for peat coal decreased again.

Today the most important peat extraction countries in Europe are Finland, Sweden, the Baltic States, Ireland and Germany, as well as the European part of Russia. In Russia, Finland, Ireland and Sweden, peat is still used as a fuel for energy production, around 50% of the peat extracted in Europe (excluding Russia) is used for energy.

Pricked bales of peat, piled up to dry