This article deals with the village of Wandersleben in Thuringia. For further meanings see Wandersleben (disambiguation) .

Wandersleben is a village in the eastern district of Gotha in Thuringia . Since January 1, 2009, the formerly independent municipality has been part of the rural municipality of Drei Gleichen . The seat of the community is in Wandersleben. The district had 1649 inhabitants on December 31, 2010 on an area of ​​12.63 km².

Wandersleben is located in the Apfelstädt river valley at an altitude of 270 m above sea level. NN almost in the middle of the triangle Gotha - Erfurt - Arnstadt . The parts of the municipality separated by the river are connected by two bridges (one of which is only for pedestrians). Near the train station, the red water flows out at a height of 258 m above sea level. NN in the apple city.

Wandersleben has good transport links via the A4 motorway junction and via a stop on the Thuringian Railway in the Gotha – Erfurt section. The Thuringian City Chain Cycle Route runs through the village and leads from Creuzburg in the west via Erfurt to Altenburg in the east.

Wandersleben is a popular starting point for hikes to the Drei Gleichen .

Wandersleben is first mentioned in a document as Wantesleiben or Wantesleibo in a list of donations from the Fulda Monastery , which contains donations from the years 780 to 817. The history of the community has long been determined by the nearby Gleichen Castle . From the middle of the 10th century until they died out in 1631, the Counts of Gleichen had their seat here. The Hatzfelder were the successors for this part of the Grafschaft Gleichen until this family also died out in 1793. Wandersleben and Gleichen Castle fell back to Kurmainz and were placed under a separate administrator. In 1802 Wandersleben became Prussian . After the French occupation, the place with the neighboring former Mainz-Erfurt office Mühlberg became part of the Prussian administrative district of Erfurt ( district of Erfurt ) as an exclave .

After the Thuringian Railway had passed Wandersleben since 1847, the town received its own train station in 1885. A large estate in Wandersleben was the domain that belonged to the Duke of Saxe-Coburg and Gotha. It was also teaching material. In April 1945 the site was occupied by US troops and, like all of Thuringia, passed on to the Red Army at the beginning of July .

With the reorganization of the state in 1945, Wandersleben came to the state of Thuringia and has been part of the Gotha district ever since. In 1952, this part of the newly formed Erfurt district , which existed until the state of Thuringia was re-established in 1990. On May 21, 1992, the community merged with the neighboring communities of Grabsleben , Mühlberg and Seebergen to form the Drei Gleichen administrative community. From this merger, on January 1, 2009, the community of Drei Gleichen was created.

On the night of August 10-11, 2005, a major fire destroyed the town's shopping center down to the walls. The local volunteer fire brigade , which has its fire station 50 meters away, was only able to control the fire and prevent it from spreading to other buildings, despite the support of the fire brigades in the surrounding areas. The newly built shopping center opened on November 23, 2006.

(Figures refer to December 31 of the year specified) 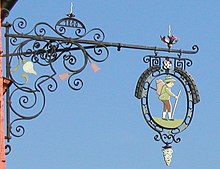 Coat of arms on the town hall 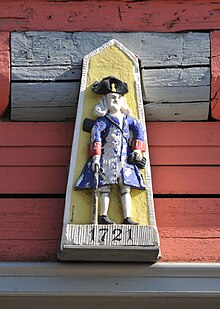 Since the re-establishment of the state of Thuringia in 1990, the conservative parties in town have received a high proportion of votes. In the last local election before the dissolution of the municipality in June 2004, the CDU had received 47.1% of the votes, a free voter group 33.7% and the SPD 19.2%. The last mayor since 1998 was Gerhard Päselt (CDU), who after the merger to the community of Drei Gleichen also held the office of local mayor until the district mayor election in 2014. In the last district mayor election in 2014, Sven Dahmen (FWG) received 42.0%, Gerhard Päselt (CDU) 41.5% and Dieter Honauer (SPD) 16.5% of the votes cast. Since none of the applicants received more than half of the valid votes cast, there was a runoff. This was decided by Sven Dahmen (FWG) with 57.8%.

Blazon : "In gold, a hiker in natural colors with a silver shirt, blue jacket with red collar and red socks with gold decorations, the lower buttons open, red breeches and stockings, black shoes and a black hat, a black roll diagonally across the back ( Blanket), in the right a black stick with a silver tassel, in the left a black glove. "

Above the entrance door of the town hall there is a relief stone with the year 1721, which represents a wanderer; We have also found the wanderer in the seal since the 18th century. The Wandersmann stands for the numerous visitors who visit Wandersleben and its wonderful surroundings. The gold of the escutcheon embodies the sun and the grain fields of late summer, which largely characterize the landscape. The wanderer wears a traditional costume that was common at that time and in this area and has been handed down as a symbol of the village seal since 1721.

The coat of arms was approved on August 14, 1998 and designed by Horst Baumgart from Wandersleben. 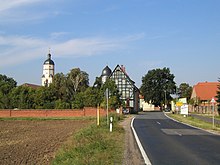 Wandering life from the east

Since September 2005, an exhibition on the life and work of the formerly famous Christian Friedrich Hunold alias Menantes has been available in the Menantes literary memorial. It was created in a renovated stable building in the rectory.

The museum is a protected cultural monument in the municipality of Drei Gleichen.

The history and local history association Wandersleben has set up a small local museum at the medieval residential tower. In the rooms of the servants' house, visitors can experience the village life of bygone times.

The castle Gleichen (also Wanderslebener Gleiche , Wandersleber Castle , Wandersleben Castle ) is a medieval castle ruin . It belongs to the castles ensemble of the three equals . 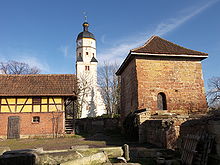 Church of St. Petri, on the right the medieval residential tower

The residential tower of migrant life was built around 1250 as part of a manor house and belonged including large estates the sex of scenting . After the manor was burned down in 1450, the residential tower was incorporated into a new large building, a four-sided courtyard, in 1599 . In 1636 he went as a fief to those of Volgstedt . Until 1975 the building had constantly changing owners when it passed into the ownership of the municipality.

The history and homeland association Wandersleben 2005 e. V. the object. Since then there has been regular support and redesign. In September 2010, the redesign could be continued with the handover of the reconstructed servants house, in which club rooms for small events and a small museum were set up.

The entire area around the medieval residential tower - a former four-sided courtyard - offers a variety of objects that could be seen on a farm. With the redesign of the courtyard at the residential tower between 2008 and 2010, half of the front building, which was no longer available, was rebuilt. The history and local history association Wandersleben 2005 e. V. set up rooms in it as a small local museum. On the lower floor you can see a copy of the cartular with the first mention of the place, historical maps and photos. In the former small court kitchen and on the upper floor, furniture, household items and household items from a farm from bygone times, which were left by residents and visitors, are shown.

The originally Romanesque church stands on the outskirts in the direction of Apfelstädt .

Wandering life from the south

Waid and other mills

In the far west of the Wandersleben district, about 1.5 km away in the direction of Seebergen, stood the Waidmühle , which was destroyed by arson in early 2000 and then completely demolished. It is the last of three mills that were operated in the immediate vicinity of the Apfelstädt, but not with the water from the Apfelstädt, but with that of the Mühlgraben, which comes from Günthersleben and about 1000 m away upstream the Mittel- and Obermühle ( "Weidmühle", formerly "Mühle unter den Weiden", in the Seeberger area) fed with water. It flowed from about Obermühle parallel to the Apfelstädt. The trench has been largely dry since the late 1950s. Obermühle and Mittelmühle date from 1299 and are the oldest mills along the 20 km long Apfelstädt-Mühlen nature trail for explorers between Schwabhausen and Marienthal near the Apfelstädt confluence with the Gera.

The mills were mentioned in a document as early as 1299 as a gift from the Count of Orlamünde to the Stadtilm monastery. In a feudal letter from Count Adolf and Siegmund von Gleichen from 1436, a mill is named "to Seebergen zu". Over the centuries, the owners and operators changed frequently, with nine operators in the 18th century alone.

The ownership and operator relationships have been documented almost completely since 1621:

Wandering is the goal of the annual Thuringian Castle Tour , in which more than 10,000 cyclists regularly take part. According to the organizers, this is the largest bicycle rally in the world, although it should be noted that the Berlin bicycle rally with over 100,000 participants attracts significantly more cyclists.

Every year on the third weekend in September, the Wandersleben farmers' market has been held for over 30 years. Here, articles from the region are offered, the kindergarten, the Wandersleben carnival club, the Wandersleben spinning room and other clubs provide atmosphere and entertainment, grain was threshed with Lanz technology and much more.

The last weekend in May is traditionally at the medieval residential tower for all those who are interested in history and culture at the same time.

Between Wandersleben and the Autobahn, huge halls for laying hens were built in the 1970s for a "fresh eggs combine" of LPG Wandersleben, which significantly impaired the Drei Gleichen landscape. In the meantime they are no longer so noticeable due to the surrounding tree growth. The systems were taken over by the Sachsen-Ei company after the fall of the Wall.

In 2013 an "organic pig fattening facility" was to be built on the outskirts. The population of Wandersleben joined together in a citizens' initiative in 2012 and was able to prevent construction.

At Glas-Cycle , important secondary raw materials for the glass and metal industry are obtained.

The Wanderslebener call themselves and by the inhabitants of neighboring communities Sand Ride- called, perhaps because they in the valley of Apfelstädt There, with the abundant sand Siedel (ed).

Commons : Wandersleben  - Collection of pictures, videos and audio files
Districts of the community of Drei Gleichen