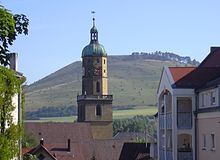 The town church against the backdrop of the Ipf

The Church of St. Blaise is a church in Bopfingen in Baden-Württemberg Ostalbkreis . It was essentially given its shape during the heyday of the former Free Imperial City in the 13th and 14th centuries. Since the Reformation in Bopfingen was introduced very moderately over decades, the art treasures from the late Middle Ages have been preserved almost intact.

A wooden predecessor to today's church was built around 650, one of the first churches in the Alemanni area . In Franconian times, a first stone chapel was built using tufa-lime blocks from Roman ruins, which belonged to the early church of the region, the parish church of St. Martin in Kirchheim am Ries . The Roman cuboids are preserved on today's building. Around 1100 the noble lords of Flochberg-Gundelfingen, who were seated at Castle Flochberg , founded today's church, consecrated to St. Blaise , with its own parish . With the upswing of the place Bopfingen after the transfer of ownership to the Staufer and its location on the important Staufer connecting roads from Cannstatt to Donauwörth and from Ulm to Rothenburg, a pilgrimage developed to Blasius Church, which is attested in a letter of indulgence in 1317 . At that time, the originally single-nave Romanesque hall building was probably expanded while parts of the south wall and the west wall around the choir area were retained , but the church was probably destroyed in 1330 during the dispute over the Hohenstaufen heritage and the associated destruction of Flochberg Castle damaged.

In the late 15th century the nave was extended to the north, which means that the northern church windows show late Gothic style elements. The sacrament house from 1510 comes from Hans Böblinger the Elder. J. The church tower was renewed in 1561, but collapsed in 1611 and was rebuilt in 1613 as it is today. Since the bourgeois community had partially taken over the costs of the reconstruction, the ownership of the two octagonal upper floors of the tower passed to the community, which could therefore also use it for secular purposes (time display, city surveillance). The tower has bells from the early 13th and 15th centuries.

The jewel of the church is the late Gothic winged altar , which was completed in 1472. It comes from the workshop of the Nördlingen master Friedrich Herlin , who was the first painter in southern Germany to know how to paint in the new way of the Dutch Jan van Eyck and Rogier van der Weyden . The wings of the altar painted by Herlin show the birth of Christ on the left inside and the Adoration of the Magi on the right inside. The outside of the wings show the capture of St. Blaise and his presentation to the governor, on the right the martyrdom of the saint. The back of the shrine (now hung separately in the church) is painted with scenes of the Passion of Christ.

The sculptures on the Herlin altar were created by a master from Upper Rhine who succeeded Niclas Gerhaert van Leyden . The central shrine contains a carved "grape Madonna", in the side shrines there are figures of the helpers Blasius and Christophorus. In the predella are twelve small apostle figures. The conversation narrowness of the altar was of Herlin employee Hans Weidenlich carved.

A fragment of a wall painting from around 1400 has been preserved in the sacristy of the church. The remains of the choir wall paintings are only a little younger, again with scenes from the martyrdom of St. Blasius. On the north wall are the remains of a cycle of pictures from the life of Jesus, which was probably created after the nave was widened around 1460/70. The depiction of the Last Judgment on the choir arch and the larger than life depiction of St. Christophorus on the south wall probably come from the post-Reformation period. The so-called Bopfingen denomination picture , a canvas picture hung in the church from around 1600, documents Bopfingen's commitment to the Augsburg denomination from 1530.

In the church there is also an epitaph for Walter von Bopfingen , a life-size tomb for a Knight von Emershoven from 1524 with an attached relief depicting the crucifixion made of red marble and epitaphs for the town clerk Sylvester Vischer, who died in 1576, the preacher Balthasar Pfister, who died in 1581, and who died in 1612 Town clerk Balthasar Enslin, an ancestor of Goethe .