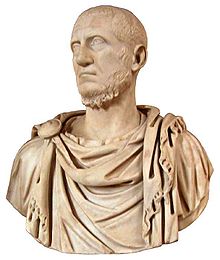 Bust of Marcus Claudius Tacitus from the Louvre

Tacitus was born around 200, but no reliable sources exist regarding his youth or career. All that is known is that he held the consulate in 273 . Although Tacitus was only emperor for a few months, his rule is highlighted in the sources as a time when the Senate allegedly regained its old position of power and the long-lost aristocratic republic was restored. This image, which modern research has long since exposed as fiction, is also conveyed in relation to his accession to the throne.

After the surprising murder of Aurelian , there is said to have been a six-month interregnum , while the soldiers discussed the new emperor, as Aurelian had left no designated successor and the legionaries apparently could not agree on a candidate. In the end, according to several sources, they decided to delegate the decision to the senators, who ultimately named Tacitus, a respected comrade who had become a member of the Senate after a military career, as the new emperor. The soldiers followed the proposal of the Senate and proclaimed Tacitus emperor.

This representation apparently goes back to pro-senatorial sources. The similarities that can be found in several late antique historical works, for example in Aurelius Victor and in the Tacitusvita of the Historia Augusta , can be traced back to the so-called Enmann Imperial History , which served both works and several breviaries as an important source. In fact, Tacitus ascended the throne in November or early December 275, so the “Interregnum” lasted a few weeks at most. In the Historia Augusta , the anonymous author filled the sparse information he found in his sources with his own inventions; so the statement that the emperor considered himself a descendant of the famous historian Tacitus and had copies of his works made is to be regarded as fiction.

It is noteworthy, however, that the choice fell on Tacitus at all, because at the time of his appointment Tacitus is said to have already reached the high age of 75 years at that time - although this number cannot be secured due to the problematic tradition of the time of the imperial crisis of the 3rd century can. Tacitus probably belonged to the senatorial upper class of the empire, even if he had only risen to this because of a successful military career. Probably the choice of Tacitus was more of an embarrassment solution. According to most sources, Tacitus was elected by the Senate; A not unimportant exception is the Byzantine historian Johannes Zonaras . He reports that the army elected Tacitus as emperor and that he then asked the senators for confirmation. Zonaras, who also offers some not unimportant additional information about the reign of Tacitus, was apparently able to rely on a now lost historical work from the 4th century (possibly the lost annals of Virius Nicomachus Flavianus ), which he received via an intermediate source , the so-called Leo spring , was accessible.

Tacitus appointed his (half) brother Florianus as Praetorian prefect . To further secure his power, he distributed monetary gifts. In addition, he punished Aurelian's murderers and entered the consulate in 276. Although the restoration of Senate rule claimed in the Historia Augusta did not take place, Tacitus was very accommodating to the senators, especially since he himself belonged to this class. On coins he is even referred to as a restitutor rei publicae . It was to this self-portrayal that Tacitus owed his good reputation in senatorial historiography, in which he was stylized as a "Senate Emperor".

Soon after his enthronement it came to border disputes, as Germanic tribes, the Goths and Heruli , from north of the Black Sea to Asia Minor invaded. The incursion had already occurred in 275, but Aurelian's death had prevented an immediate response. Tacitus went against the invaders and probably won a victory over them in the early summer of 276, whereupon he assumed the title Gothicus Maximus . Shortly afterwards he died. Florianus succeeded Tacitus on the throne for a short time.

There are two versions of the circumstances in which Tacitus died: one is that Tacitus was murdered; it can be found in Greek sources such as Zosimos or the Byzantine Zonaras. According to Zosimos, the perpetrators were the same men who had also murdered a relative of Tacitus named Maximinus, the governor of Syria , and who also killed Tacitus for fear of punishment. Sometimes the act is even associated with the murder of Aurelian. The Latin tradition, on the other hand, contains the representation, which is not implausible in view of his age, that Tacitus died a natural death; the Epitome de Caesaribus , Eutropius and Aurelius Victor report about it . Klaus-Peter Johne nevertheless considers the versions that speak of the murder of Tacitus to be more plausible.