and space pioneer who played an important role in the history of space travel .

Under Korolev's direction, the OKB-1 experimental design office developed rockets and spaceships . His ideas and his leadership style had a major impact on Soviet space travel . Some developments that were implemented or initiated under his direction, such as the Soyuz rocket and the Soyuz spaceship, are still used today in an improved form.

Korolev's parents, the Russian teacher Marija Nikolajewna Balanina (née Moskalenko) and Pawel Jakowlewitsch Korolev, separated three years after his birth. On his mother's side, Korolev came from a wealthy merchant family with Greek and Cossack roots . On his father's side, Korolev was of Belarusian origin . Sergei Korolev identified himself as a Ukrainian , but occasionally called himself Russian to show loyalty to Russian culture.

Korolev grew up with his grandparents in Neschin . When he was ten years old, the family moved to Odessa . There he completed an apprenticeship as a bricklayer and roofer. Korolev showed an early interest in aviation and from June 1923 worked alongside his job in the local glider club OAWUK, where he designed his first glider K-5 at the age of 17 . 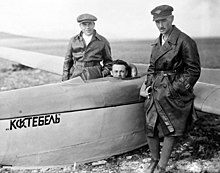 Korolev in the cockpit of the sailor Koktebel , 1929

In 1925 Korolev began studying at the Kiev Polytechnic Institute . In addition, he continued to fly gliders and constructed gliders. When the Kiev faculty was closed, he moved to the Moscow Technical University (MWTU) in 1926 and completed his studies there. Before that, he completed an internship at the Central Aerohydrodynamic Institute (ZAGI), where he came into contact with the construction of powered aircraft. In 1927 he took part for the first time in the "All Union glider competition" in the Crimea , an event comparable to the German Rhön competitions . In 1929 Koroljow developed and built the Koktebel glider together with S. N. Lyuschin . In the same year, under the guidance of Andrei Tupolev, Korolev's diploma thesis was his first SK-4 powered aircraft . On February 9, 1930 Korolev received his diploma as an aircraft engineer . As an aircraft designer, Korolev also developed the Red Star glider in 1930 . It was the first motorless aircraft with which a loop could be flown in the Soviet Union . The pilot was W. A. ​​Stepantschonok.

In the 1930s, Korolev began building missiles as part of the MosGIRD . There he received essential impulses for his later work from Friedrich Zander . Together with Zander, whom he regarded as a mentor, he was involved, among other things, in the design and construction of the first Soviet hybrid missiles GIRD-09 and GIRD-X . In 1933 he moved to the Rocket Research Institute (RNII) and in 1934 became head of the rocket missile department. In the same year his scientific treatise The rocket flight in the stratosphere appeared .

Imprisonment during the Great Terror

While working on the RP-318-I rocket-propelled glider, Korolev was arrested by the NKVD's political secret police in the course of the Great Terror on June 27, 1938 . After two days of torture and threats against his family, he signed a confession identifying himself as a member of a counterrevolutionary Trotskyist conspiracy and a participant in acts of sabotage to impede development. He had been denounced under duress by Valentin Gluschko , who had been arrested three months earlier and who himself was in custody until 1944. Although innocent, Korolyov was sentenced to ten years of forced labor in the Gulag and five years of loss of civil rights on September 27, 1938 without a formal trial . After staying in several prisons and longer transport it reached on April 21, 1939, the notorious labor camp Maldjak ( 63 ° 0 '  N , 148 ° 14'  O ) on the Kolyma , where he nearly starved and so hard to scurvy ill that his lower jaw was badly damaged and lost many teeth. 62.999166 148.235 810

Thanks to his mother's interventions, with the assistance of well-known pilots Mikhail Gromov and Valentina Grisodubova , the Supreme Court of the USSR overturned the previous judgment on June 13, 1939. It was not until November 1939 that Korolev was recalled from Maldjak and from March 1940 was imprisoned in a Moscow prison to retrial. On July 10, 1940, the NKVD reduced his sentence for Trotskyist activity to eight years of forced labor in the Gulag. After renewed interventions by his mother and Gromov with the NKVD People's Commissar Lavrenti Beria , he was sent on September 13, 1940 to the special design office of the aircraft manufacturer Andrei Tupolev , who had already supervised Korolev's thesis and was also imprisoned. The special camp ZKB-29 for scientists and engineers was subordinate to the NKVD and was a Sharashka , which was described by Alexander Solzhenitsyn in the novel The First Circle of Hell from his own experience. In Omsk, the ZKB-29 developed the Tupolev Tu-2 dive bomber , which was first used in the military in September 1942.

Although with the successful development of the Tu-2 there were legitimate hopes for the release of the imprisoned engineers, Korolev applied in October 1942 for a job in an aircraft engine plant in Kazan , where Gluschko headed the OKB-16 special design office for rocket propulsion under Sharashka conditions. Korolev participated in the development of the multi-purpose aircraft Petlyakov Pe-2 in order to improve the launch behavior and the climbing performance with a switchable rocket engine . The first successful attempt of the prototype Pe-2RD took place on October 1, 1943. On August 10, 1944, Koroljow and Gluschko were released early from prison on parole and continued their work on the rocket developments as engineers of the OKB-16. Korolev's official rehabilitation did not take place until April 18, 1957, six months after Glushko's rehabilitation.

Korolev's six-year imprisonment in the Gulag was erased from Communist accounts of the history of technology. After his death in the 1970s, his biographer described every week of Korolev's life meticulously, but disguised the entire imprisonment: "Due to various circumstances, the designer was unable to take part in the flight tests of his wing rocket." 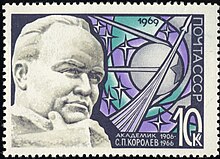 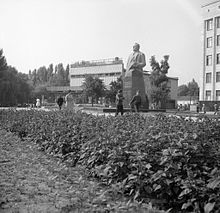 Monument to Sergei Korolev in Zhitomir , 1972

After the Second World War he was promoted to chief designer of the initially only military-oriented Soviet missile program within the NII (Scientific Research Institute). Korolev's identity was kept secret during his lifetime and he was only anonymously referred to in public as the “chief designer”. Korolyov's goal was to develop a civilian missile program. In 1945, now with the rank of Colonel in the Red Army , he was ordered to the Soviet headquarters in Berlin with other engineers and technicians . He was commissioned to study the German missile program and to find employees of the missile engineer Wernher von Braun who remained in Germany . From autumn 1945 he lived in Bleicherode, Thuringia .

He returned to the Soviet Union in 1946 with plans for German designs and German rocket designers. Among others, the assistant Wernher von Brauns, Helmut Gröttrup , and the aerodynamicist Werner Albring worked under the direction of Koroljows in Kaliningrad (in Moscow Oblast ) and on the island of Gorodomlja (today the Solnetschny settlement ) in Lake Seliger ( Russian озеро Селиге́р / osero Seliger) ) ( Kalinin Oblast ) on the development of missile technology. The first design resulting from this collaboration was the R-1 rocket from 1948, a copy of the German A4 based on materials available in the Soviet Union. In contrast to the Americans, who brought German scientists to the USA with their Operation Overcast and who, as early as 1946 , ensured that scientists were naturalized and kept in the USA with Operation Paperclip , the Soviet Union only skimmed off their knowledge used it in the crucial steps for space travel.

Korolev's greatest successes included the construction of the R-7 - the world's first ICBM - and the launch of the Sputnik 1 in 1957, but above all the first human space flight , Yuri Gagarin , in 1961.

Monument to Korolev in the city named after him Korolev

In December 1960, Korolyov suffered a heart attack, which was followed by more. In addition to his cardiac arrhythmias, there were internal bleeding and intestinal problems. On January 5, 1966, Sergei Korolev was admitted to a Moscow hospital. The doctors wanted to remove painful hemorrhoids in a routine operation on January 14, 1966, but in the meantime they discovered a large tumor in the colon and put him under general anesthesia. The intubation of the trachea, which was necessary due to poor circulatory system, failed due to the scurvy-related jaw anomaly as a late consequence of the Gulag imprisonment, which caused his death.

The Soviet government honored him with the burial of his urn in the Kremlin wall . In 1996 the city of Kaliningrad in Moscow Oblast, where he headed the experimental design office OKB-1 as chief designer from 1950 , was renamed after him. The city of Koroljow (Russian Королёв) houses today's control center of Russian space travel and the space company RKK Energija as the successor to OKB-1.

With Korolev's death, the Soviet space and lunar program suffered a major loss. Work on the N1 moon rocket was continued by his colleague Vasily Pavlovich Mishin , but stopped in 1974 after several false starts.

The identity of the chief designer remained a state secret in the Soviet Union during his lifetime. While his opponent Wernher von Braun presented himself to the public in the press and television in the USA , Korolev was not known even in his own country. When the Nobel Committee after the successful launch of Sputnik 1 in Nikita Khrushchev asked for the name of the chief designer, he answered that it was the work of the entire Soviet people, and this would therefore deserves the award. This secret was only revealed on the occasion of the state funeral in Moscow.

In the Soviet feature film Taming the Fire ( Укрощение Огня ) from 1972, which describes the early days of the Soviet space program, Korolev served as a template for the role of Andrei Bashkirzew.

The BBC published in 2005 to the four-part docudrama race to the moon (English title Space Race ).

The Russian spaceship Korolev is named after him in the Stargate series . In the series Spaceship Enterprise - The Next Century, there is a Korolev class.

Four-part Spiegel TV series Die Eroberung des Himmels - The Cold War for supremacy in space, published as Spiegel DVD No. 8 as a free addition to issue 39/2007.

The Russian film Die Zeit der Erste (Spacewalker) from 2017 tells the story of the cosmonauts Belyayev and Leonov and their space flight with the Voschod 2. Here the Russian actor Vladimir Ilyin took on the role of Korolev.