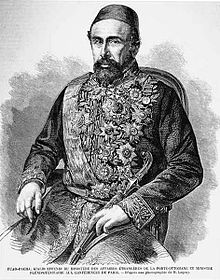 Fuad was the son of the respected poet Keçecizade Izzet Molla. He was trained at a medical school and was initially an army surgeon. In 1836 he entered the civil service as an official in the Foreign Ministry. He became secretary of the embassy in London; was entrusted with special missions in the principalities and in St. Petersburg (1848), and was sent to Egypt in 1851 as a special agent. That year he became Minister for Foreign Affairs, a post to which he was later called four times and which he held at the time of his death.

During the Crimean War , he commanded the troops on the Greek front and was distinguished by his courage. He became an Ottoman delegate at the Paris Conference of 1856, was entrusted with a mission to Syria in 1860, and was Grand Vizier and Minister of War in 1860/61. He accompanied Sultan Abdülaziz on his trip to Egypt and Europe. He died in Nice, where he had gone because of his health.

Fuad was famous for his boldness and decisiveness, as well as his alert mind and many bonmots. Generally considered a pro-English policy, he rendered valuable services to his country through his competent management of the Porte's external relations, and not least through his effective mediation in Syrian affairs after the massacres of 1860.

According to the Grand Lodge of Free and Accepted Masons of Turkey , Mehmed Fuad Pasha was a Freemason .