Portrait of the Pasha 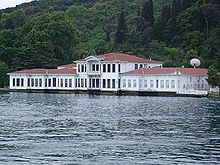 Summer residence of Mehmed Emin Pasha on the Bosporus, acquired and expanded in 1840

Mehmed Emin Pasha's uncle was Kethüda of Mahmud II and administered his private fortune. The uncle had the nephew trained at an enderun and arranged for him to be accepted at the Sultan's court. In 1828/29 he left the Hohe Pforte and joined the Hassa regiment, where he began his career as an officer. He then studied in Europe at the sultan's expense. Like many other Ottoman statesmen of the Tanzimat period, he began his government career in the Dragoman office ( Tercume Odası in Turkish ), took over government offices in the Ministry of Foreign Affairs and held several diplomatic and governor posts.

In 1844/45 he served as a serasker in Acre and from 1845 to 1847 as governor of Jerusalem . He was involved in the suppression of the Bedouin revolt in Tirnova and then served in Belgrade in 1847/48 . During this time, rumors of his mismanagement circulated, but these were dismissed as gossip by the Sultan. In 1848 he was promoted to vizier .

In the years 1850/51 Mehmed Emin was governor of Eyâlet Aleppo and was promoted to Müşir ( field marshal ) of the province of Syria. In 1854 he also served as Kapudan Pasha .

In September of the same year Mehmed Emin Pasha became governor of Edirne and remained in office until his dismissal in April 1864. He then became a member of the Council of State ( Mecalis-i Devlet-i Aliye ) in 1865 and was chairman of the Supreme Court ( Meclis-i Vâlâ-yı Ahkâm-ı Adliye ) from 1866 .

Mehmed Emin Pasha died in 1871 in his summer villa ( Yalı ) on the Bosphorus in Istanbul's Üsküdar district .

After the death of the pasha, his wife Melek Hanım wrote her memoirs from the harem and provided not only a biography of the pasha, but also a moral picture of upper class Ottoman society in the 19th century.