The title of this article is ambiguous. Further meanings are listed under Dragoman (disambiguation) . 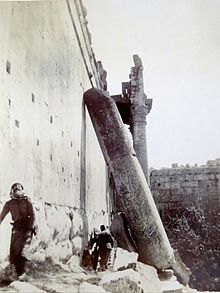 Dragoman Joseph Shaar at the Temple of Baalbek (1891)

A dragoman ( Arabic ترجمان tarǧumān , turdschuman ) is a translator , interpreter or linguistic guide in the Middle East , especially for the languages ​​Arabic, Turkish and Persian .

The word goes back to the Semitic root trgm , which already appears in Akkadian (as targumannu ) and in Aramaic (as targemana ). All of these words mean translator , the Hebrew Targum means translation . As early as the 6th century BC, a special professional group was established in Egypt , which consisted in particular of Greeks living in the country who had to take care of Greek travelers in the country.

During the Middle Ages, these interpreters mainly looked after Christian pilgrims . These brought the word to Europe, where it appears in Middle English (as dragman ), in Old French (as drugeman ), in Middle Latin (as dragumannus ) and in Middle Greek (as dragoumanos ).

Under the Mamluken government between 1270 and 1510, the dragomane had to be accredited by the respective sultan and were responsible for the accommodation and behavior of Christian foreigners.

In 15th century French travelogues he appears as a “truceman”, in German as a “trutzelmann” or “drugman”. Towards the end of the 15th century he took over the care and accommodation of all Christian "tourists" in Egypt from his residence in Cairo .

After Europe this word came originally from Egypt. In Egyptian Arabic , the Arabic letter Ǧ (Dschim, Ǧīm; Anglicized j ) and g spoken and not, as in the other Arab countries as dsh .

In the 19th century this term was used to designate an interpreter specifically for communication between the state authorities and the embassies and consulates in the Orient .