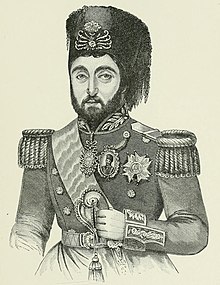 Reşid joined the public service early on, as he got a job as a reporter in the Department of Foreign Affairs in 1820. After taking part in the negotiations on the Treaty of Kütahya in 1833 , he became ambassador to Paris in 1834 , then to London in 1836 and finally foreign minister in November 1837. As a result of the counter-efforts of the Old Turkish Party, he was suddenly dismissed in the autumn of 1838 and went to London, Berlin and Paris as the Sultan's ambassador extraordinary , where he represented the interests of the Porte towards the Viceroy of Egypt.

Reşid was a member of a Masonic lodge in London and spoke French and English himself.

After Sultan Mahmud II's death on July 1, 1839, he was called back to Constantinople by the mother of the new Sultan Abdülmecid and again took over the Foreign Ministry on September 5. At his instigation, the hatt-ı şerif of Gülhane was issued on November 3, 1839. Serail intrigues caused his overthrow in March 1841, whereupon he returned to Paris as envoy in July. Dismissed from there in January 1843, he was suspected by the Sultan as a despiser of Turkishness, and exiled as governor to Adrianople , but did not accept the position and returned to Paris.

After the fall of Riza Pasha at the end of 1845, he was first again Minister of the Foreign Office and in 1846 finally Grand Vizier (meaning from 1922 and until today: Prime Minister), an office that he held six times under Abdülmecid until 1857.

As Grand Vizier, he carried out various reforms in the areas of the legal system, education and administration:

In the meantime, Reşid Pasha served again as Foreign Minister from May 1853, and in this role he promoted the anti-Russian policy of the Ottoman Empire. Intrigues on the French side led to his being forced to resign on July 31, 1857. On October 22, 1957 he was again appointed Grand Vizier. Reşid Pascha was instrumental in initiating a fundamental reorganization of the administration of the state, which ended as a historical process between Tanzimat and the Ottoman Constitution 18 years after his death.