A defibrillator with an ECG function used in the rescue service 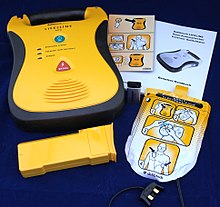 Semi-automatic external defibrillator with electrodes, rechargeable battery and instructions for use. The red button must be pressed to deliver a shock.

Adult electrodes in sterile packaging that must be connected to the defibrillator after removal.

Semi-automatic external defibrillator with display for visual representation of voice instructions. A DIN A4 sheet in size comparison.

A defibrillator improves the chances of successful cardiopulmonary resuscitation , but it cannot replace it.

Ventricular fibrillation is initially present in 85 percent of all sudden cardiac deaths . A defibrillator can interrupt this electrically circulating excitation in the heart by simultaneously stimulating at least 70 percent of all heart muscle cells. A large number of cells are depolarized at the same time, with the result that these cells can no longer be excited for a relatively long time (about 250 ms = refractory period of the cells). The orbiting shaft is virtually cut off the path, and the heart is again in a state where the natural conduction system can take over the stimulation of the heart again.

The earliest possible use is crucial for defibrillation, as the insufficient supply of oxygen to the brain caused by ventricular fibrillation (brain ischemia) can lead to massive neurological deficits within a short time. For this reason, more and more automated external defibrillators (AED) are being placed in public spaces. The successful use of an AED stands or falls with the correct implementation of cardiopulmonary resuscitation . The AED is only an addition, not a replacement. However, it must be taken into account that with one ventricular fibrillation per minute the patient's chance of survival decreases by 10%. Therefore, a lay defibrillator (AED) must and should be used as early as possible. 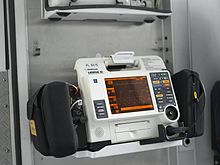 Biphasic defibrillator. In a biphasic current flowing current first electrode from A to B and then back from B to A.

The cardioversion is an ECG -synchrone defibrillation in short anesthesia . In this case, the current pulse (usually with a lower energy, 100 joules ) is emitted by the device immediately after a chamber complex (large spike in the EKG) is recognized. It is used for atrial fibrillation to regain the sinus rhythm and for rapid malignant cardiac arrhythmias of the heart chambers that cannot be controlled with drugs (e.g. ventricular tachycardia ).

Schematic representation of the principle of a defibrillator

The energy from the condenser is large electrodes made, with either hands on the chest of the patient to be pressed (so-called paddles ) or glued to the chest (so-called adhesive electrodes or Fast-Patch ). Especially in publicly accessible defibrillators (abbr. PAD . Of English public access defibrillator only adhesive electrodes used practically -) are - to simplify the operation and reduce the risk of electric shock to the user. For use with the chest open (during operations) there are versions with spoon-like electrodes that are placed directly on the heart muscle.

The output stage generates certain pulse shapes. The control unit controls the charging process of the capacitor and, as a protective function, also ensures that the capacitor, which has been charged to high voltage, is discharged via an internal resistor if no energy is released.

Modern defibrillators work biphasic . This means that the output stage not only emits a current impulse with one polarity, but also reverses the direction of the current by changing polarity at the electrodes. Biphasic devices thus make it possible to manage with less energy output and less damage to the heart muscle with the same effectiveness. Technically improved biphasic defibrillators measure the complex body resistance ( impedance ) of the patient by means of the glued-on electrodes and adjust the current strength and voltage before the energy is released . Slim, small patients with low impedance receive less power than z. B. overweight, tall patients. There is now also evidence that when several treatments are required, increasing (escalating) energy levels are more effective than the same amount of energy given to the patient.

Conventional (manual) defibrillators also include the functions of an EKG and are used, for example, in the rescue service. Some of these devices can also be used as external pacemakers , to measure oxygen saturation , to measure blood pressure or as a capnometer , and often have a built-in option for semi-automatic defibrillation for use by non-medical rescue service personnel.

Automated external defibrillators (AED, coll .: "lay defibrillators") are particularly suitable for lay helpers due to their design and functionality. The devices recognize whether a shock is necessary and sensible without the intervention of first aiders. This prevents incorrect operation. Depending on the design, a shock is delivered either automatically or at the push of a button (“semi-automatic”). The energy that is delivered in the event of a shock is also determined by the AED. First aiders only have to pay attention to the mostly acoustic instructions such as B. performing cardiopulmonary resuscitation or during rhythm analysis or shock delivery, setting the chest compressions (and if necessary, distance from the patient).

In patients at high risk of ventricular fibrillation or other malignant cardiac arrhythmias, miniaturized automatic defibrillators (implantable cardioverter defibrillators or ICDs from English Internal Cardioverter / Defibrillator ), similar to a pacemaker , can be implanted. Your electrodes (main electrode is in the tip of the right ventricle) are in direct contact with the heart muscle and trigger automatically if necessary. Much lower energies are possible through direct contact, but the patient definitely notices a painful blow. Despite the life-saving function, this can be psychologically stressful for the patient.

If patients are to be protected from a temporary, increased risk of life-threatening, rapid cardiac arrhythmias, for example from implanting an ICD or CRT-D, they can be protected by a defibrillator vest (wearable cardioverter / defibrillator, WCD). This can also be used if there is a risk of tachyarrhythmia with an unknown course or if the risk persists to bridge a phase in which the patient is inoperable.

The WCD is a therapy device which essentially consists of two components. The electrode belt, to be worn directly on the skin of the upper body, contains four ECG electrodes and three therapy electrodes. The connection cable transmits two ECG leads for heart rhythm monitoring to a monitor device, the actual defibrillator.

If a malignant rapid rhythm disturbance is detected, the device automatically starts the treatment mode. This is signaled visually, acoustically and by a vibration alarm directly to the patient and the environment. If the patient does not react due to loss of consciousness, the necessary treatment process is automatically carried out by the defibrillator vest.

The unconscious patient receives the life-saving shock from the therapy electrodes on the back and below the left breast. Because of the existing unconsciousness, this cannot be felt by the patient and is therefore painless.

If the patient is still conscious when the therapy alarm occurs, he or she suppresses a shock delivery using two reaction buttons. If he later loses consciousness, he can no longer press the reaction buttons and the device then continues the treatment mode until the electric shock is saved.

If the rapid rhythm disturbance stops by itself, the WCD automatically terminates the treatment process after it has recognized a normal ECG signal.

All critical rhythm events are saved in the monitor and can be called up by the attending physician via an internet database.

Documentation of the application

Different types of modern defibrillators record the derived EKG events, delivered shocks with their energy, the associated times and possibly also the ambient noise and the conversations of the helpers internally or on memory cards . The evaluation of this data can also be used for data processing in patient files , for quality assurance , research or forensic purposes.

Resuscitation with the help of electricity was known as early as 1825: "The most practical thing is to blow in pure living air (dephlogized air, oxygen gas). Blowing in must, however, be done with moderation and ... with well-applied electrical or galvanic heart shock." After the principle had already been recognized in experiments at Johns Hopkins University in the 1930s by electrical engineer William B. Kouwenhoven in collaboration with medical professionals and was first used in operations by surgeon Claude Beck (Case Western Reserve University) in 1947 , the development of one began Kouwenhoven introduced defibrillators for use with the chest closed at Johns Hopkins University in 1950, again in close collaboration with medical professionals. The device was successfully used in an operation in 1957 and was first used on a patient in 1960. In 1965, the British-Irish cardiologist Frank Pantridge invented the first portable defibrillator. In the late 20th century by the American Heart Association , the Public Access Defibrillation (also see (PAD) for early defibrillation with a semiautomatic machine automated external defibrillator ) is recommended.