An automated external defibrillator (AED, and Public Access Defibrillation or short Laiendefi ) is a medical device used to treat shockable cardiac arrhythmias by delivering electric shocks. In contrast to defibrillators from the rescue service or clinics , AEDs are particularly suitable for first aid by lay helpers because of their design and functionality . 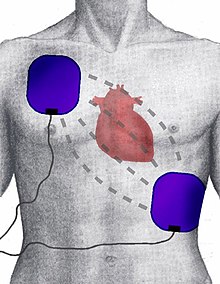 Position of the electrodes

Performing chest compressions on a dummy. You can see the electrode glued under the left armpit and the AED in the background.

In adolescents and adults, the two adhesive electrodes, also known as defibrillation electrodes or fast patches , are attached anterolaterally under the right collarbone and under the left armpit in the so-called anterior - anterior position . After applying the adhesive electrodes, software in the AED analyzes the heart rhythm . If ventricular fibrillation , ventricular tachycardia and, with some AEDs, supraventricular tachycardia are detected, defibrillation is enabled. A distinction is made between fully automatic and semi-automatic AEDs. In the fully automatic design, the device delivers the electric shock independently while constantly monitoring the shock conditions, while in the semi-automatic design the user has to press the shock button within a defined period of time. With the fully automatic design, the active pressing of the shock button is unnecessary, but there is a delay due to warning notices and there is also the risk that the patient will still be touched and a shock will be delivered without an active decision and possibly harm a first aider. The vast majority of AEDs in Germany are of the semi-automatic design.

If a non-shockable rhythm is detected or if the measured values ​​are below the device-specific asystole limits , defibrillation is not released. Every two minutes an instruction is given not to touch the patient in order to allow a new ECG analysis and possibly a new shock.

Some AED models support the first aider with the necessary cardiopulmonary resuscitation , but to a very different extent. AEDs are now on the market that can also evaluate the quality of chest compressions through voice prompts and give instructions on potential for improvement (for example, "press harder", "press faster", "press slower", "completely relieve").

There are also variants for semi-professional use. These enable the display of an ECG lead and contain a manual defibrillation option and, if necessary, an integrated pulse oximeter . Such devices often have a "PRO" for "professional" in their name.

Special features for children and toddlers

Not all AEDs are approved for use in children under eight years of age. Some of the approved AEDs have significantly smaller pediatric defibrillation electrodes. These are usually recognized automatically by the device and the energy output for defibrillation is reduced accordingly. A variant of other AEDs can be switched to child mode by operating a slide control or inserting a special child key. In this case, you use the existing electrodes and glue them to the chest and back - the so-called anterior-posterior position , in order to prevent the two electrodes from touching one another. 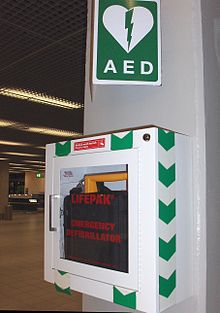 Since the chance of survival of those affected decreases by approx. 10% with every minute that passes without defibrillation, the therapy-free interval until the heart patient is cared for by the ambulance service and emergency doctor should be shortened by defibrillation as early as possible. For this reason, all well-known aid organizations have been promoting the use of AEDs in the public environment since 2001 . There are now numerous heterogeneous island projects with partially publicly accessible AEDs. These public AEDs, used as devices for public access defibrillation (PAD), can be found in airports, train stations, football stadiums and other public buildings. The AEDs are usually located in the entrance area of ​​buildings, at porters or information desks.

In order to teach in accordance with the guidelines, in 2011 all training bodies agreed that an AED should also be presented in every first aid course . In some of Germany's neighboring countries (such as Belgium, Denmark, France, Luxembourg, the Netherlands, Switzerland and Austria) there is a tendency towards regular training on AEDs.

Signage of the MVG in Munich with a pictogram for AED

The use of an automated external defibrillator (AED) by laypeople as part of first aid is legally harmless. Basically, an AED is an active medical device , i. H. The Medical Devices Act (MPG) and the Medical Devices Operator Ordinance (MPBetreibV) are decisive for the organization of operational first aid .

To 3.) The medical device representative can instruct the other operational staff. In practice, the initial training takes place in a more extensive framework for as many company first aiders as possible. In addition, in an emergency (justifying emergency; Section 34 StGB), an AED may also be used on the patient by untrained staff.

4.) A draft of the Federal Ministry of Health to amend the MPBetreibV of December 7, 2015 provided in § 10 paragraph 2 (draft) that AEDs in so-called "public space" (at train stations, airports, etc.) should be subject to a safety check can be omitted if the AED is self-testing and a regular visual inspection is carried out by the operator. This legal change came into force on January 1, 2017.

It is advisable to follow the signs for the fire extinguishers. For AED owners whose employees are insured with the employers' liability insurance association , there is an annual instruction obligation.