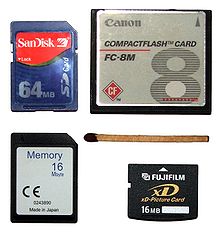 A memory card , sometimes also called a flash card or memory card , is a compact, rewritable storage medium that can be used to store any data such as text, images, audio and video. The data is saved using flash memory technology. They are used for small, mobile devices such as digital cameras or cell phones , but also as a means of data porting together with a USB stick on a personal computer .

Most current devices use flash technology, although other technologies are being developed. There are a variety of memory cards on the market:

Other storage media that belong to the plug-in flash storage media are Sony SxS ( ExpressCard -based) and Panasonic P2 ( PCMCIA -based).

Not a memory card in the true sense of the word, but due to its similar application and structure, the USB stick is included here . There are also compact memory card readers (without their own memory) with their own slot for a micro SD card, for example, so that they can be used as an adapter from the plug standard of these cards to USB .

The flash memory cards are of different sizes, whereby the storage capacity usually corresponds directly to the price. The CompactFlash card is roughly the size of a matchbook, while the MultiMedia Card (MMC) and SD card are the size of a postage stamp. Newer developments are only the size of a fingernail. In 2009, memory cards with 64 gigabytes came on the market.

The transmission speed of memory cards is usually not specified directly, but as a factor based on the reading speed of CDs (= approx. 150 kB / s for the original single-speed or 1 × drives). Starting from CD burners , this notation has also spread to other writable storage media. Example: SD card 50x = approx. 7.5 MB / s transfer speed. The terms High Speed ​​or HyperSpeed ​​etc. are not subject to any standardization, so it is not possible to say that a HighSpeed ​​card has to be very fast. In addition, the measurement methods for speeds are not standardized. In this way, exorbitant write values ​​can be determined with a few large files, which are of no relevance to many small files.

When comparing the X speed factors of flash memory cards from different manufacturers, however, it should be noted that the individual manufacturers define this speed differently or not at all. Some definitions describe the X-factor on the basis of the writing speed, others on the basis of the reading speed. Still others speak of the data transfer speed and mean both reading and writing speed.

Memory cards are mainly used here to save scores ( savegames ).

Manufacturers of game consoles usually do not adhere to memory card standards, so every game console system has its own memory card format, even if it is only the design. The proprietary formats are designed to promote sales of the original accessories; However, there are usually memory cards from third-party manufacturers that often also provide more memory. Since the introduction of the Xbox in 2001, more and more game consoles such as the Wii , Xbox 360 and PlayStation 3 have , in addition to conventional memory cards, also integrated memory in the form of a hard drive or flash memory.