Zenica (  [ ˈzɛnitsa ] ; German outdated Senitza ) is a city in Bosnia and Herzegovina . It is the capital of the canton Zenica-Doboj and with around 115,000 inhabitants the fourth largest city in the country. In December 2007 the municipality of Zenica was officially declared a city with 81 settlements. Most of the residents are Bosniaks .

View of Bosna , city and mountains

Zenica is located in the center of the state of Bosnia and Herzegovina, around 70 kilometers northwest of Sarajevo . The city is located in the Bosna Valley, surrounded by the wooded low mountain range of the Dinarides . It is one of the most important cities in the historical region of Bosnia .

The community occupies about 503 km², of which over 60 percent is forested.

The figures for this estimate are probably too high, even if many war refugees were still in Zenica in 1996.

The area around Zenica has been around since 3000 to 2000 BC. Settled. The first historical settlers were the Illyrian Desidiats , who lived at the transition from the Bronze Age to the Iron Age in the 6th and 5th centuries BC. Built similar villages. Between the 1st and 4th centuries AD, the Roman conquest began . From this time the foundations of an early Christian basilica were found near Bilimišće . In the years 6 to 9 AD, the region was the scene of the Pannonian uprising .

From the end of the 6th century AD, Slavic tribes settled in the region and all over the Balkan Peninsula . With this conquest , most of the ancient heritage - such as the basilica near Bilimišće - was destroyed.

In the early Middle Ages, Zenica is first mentioned with the name Bored or Brod and is associated with a regionally significant crossing of the Bosna River. Between the 12th and 15th centuries, Zenica was a center of the principality of Bosnia (later a kingdom). Zenica is mentioned for the first time under this name in a document of the Republic of Ragusa from March 20, 1436.

Since the fall of Bosnia under Ottoman rule in 1463, Zenica lost its importance. With the arrival of Islam , many converted to the new religion in the following centuries and thus form the Bosniak ethnic group today .

During the Great Turkish War , Bosnia became the scene of the armed conflict between the Holy League and the Ottomans. At the end of 1697 Zenica and Sarajevo were completely burned down by Commander-in-Chief Eugene of Savoy , women and children were kidnapped and valuables were stolen. The Catholic residents of Zenica left the city with Prince Eugene of Savoy. In the 18th century Catholic Croats and Sephardic Jews immigrated from Dalmatia again .

After the Berlin Congress of 1878, Austria-Hungary occupied Bosnia and Herzegovina . In the following four decades of the Austro-Hungarian administration, Zenica changed in appearance, size and function. In 1879 the narrow-gauge railway Bosanski Brod –Zenica was opened, on October 4, 1882 its continuation to Sarajevo. At Zenica it has long been believed that there were large coal deposits . Geological research in Austria-Hungary confirmed this and in May 1880 the first coal mine in Bosnia and Herzegovina was opened. In 1885 a factory for the manufacture of packaging paper started operations. An ironworks was added in 1892. The modernization of the Bosnian city began with industrialization . The telephone was introduced in 1904 and the first modern sanitary facilities were built soon afterwards. In 1908 the power station was built on the Bosna, which ensured the electrical supply to Zenica.

The construction of industrial plants and the introduction of modern technologies led to a rapid increase in the population. While 2000 people lived in 438 houses around 1879, the number of inhabitants had doubled by 1895 to 4200 people in 765 houses. In 1910, 7,000 people lived in around 1,000 houses. The majority of the population were Muslims (Bosniaks). Important minorities were Catholic Croats, Orthodox Serbs and Sephardic Jews .

The first school opened in 1885, the second in 1910. There were drama schools and one Catholic and one Orthodox denominational school and three madrasas . The activities of Mullah Mohammed Seid Serdarević gave direction to the modernization of pedagogy in Zenica as well as in the whole of Bosnia and Herzegovina. He introduced teaching in the national language and a contemporary teaching program. School was also made possible for girls.

The cinema opened in 1910 with the film Helios . 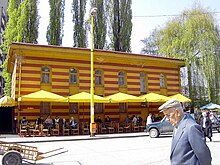 After the First World War , Bosnia and Herzegovina became part of the Kingdom of Yugoslavia . The economic and cultural development stagnated between the two world wars, although shortly before the Second World War the situation changed: A lot of investments were made in the Zenica steelworks, so that a total of 4,000 employees were employed and the company became the largest in the country. In 1931 there were 9,078 people in Zenica. Of the city's 172 Jews, only five survived the Holocaust . The partisan movement was very active in Zenica . The city was liberated on the night of April 11-12, 1945 after 346 partisans and 857 civilians had perished over the past four years.

When Josip Broz Tito came to power in Yugoslavia, turbulent and profound developments began in Zenica, as elsewhere in the country. The size and population of the city grew. In 1948, 15,500 people lived there, compared to 145,557 in 1991. The steel mill was expanded enormously and was then one of the largest in Europe. This second industrial development spurt changed the cityscape: Zenica received the reputation of a gray working-class town because of the many prefabricated buildings.

Since the Bosnian War

During the Bosnian War 1992–1995, Zenica played a special role: it took in many refugees from all parts of Bosnia and Herzegovina. After the war, most of the Serbs left Zenica or were expelled. Zenica developed especially in the field of sports and achieved a prominent role in the country.

On July 24, 2014, Zenica was officially assigned the status of a city (degree) by the parliament of the Federation of Bosnia and Herzegovina .

On October 1, 1961, the Faculty of Metallurgy "Hasan Brkić" (today "Kemal Kapetanović") was founded. From this and from the faculties of the universities in Sarajevo and Tuzla , the University of Zenica was established on October 18, 2000 . Today it consists of eight faculties (metallurgy and materials science, mechanical engineering, education, economics, law, industrial studies, health sciences, and Islamic religious education). 6000 students are currently enrolled.

The National Theater was opened in 1950.

Zenica is home to the Čelik (German steel) football club, which plays in the Premijer Liga . The football stadium Bilino Polje , built in 1972, hosts the home games of the Bosnian national team and has 15,500 seats.

Zenica is an industrial city and the location of a lignite mine and a steel mill. These formerly state-owned companies have been privatized, resulting in layoffs. Zenica has the highest unemployment rate in Bosnia and Herzegovina. The large, formerly Yugoslav state-owned companies were not continued purposefully, they were left to decay.

In August 2004 Mittal Steel took over the majority of the shares in the “Željezara” steelworks, the largest employer in the region. In 2008 steel production should reach the pre-war level again.

The A1 motorway connects Zenica with Sarajevo and is to be extended north to the Croatian border in the future. [outdated]

The city is located on the Šamac – Sarajevo railway , which belongs to the Pan-European Transport Corridor Vc and is operated by the Željeznice Federacije Bosne i Hercegovine (ŽFBH). In 1879, with the opening of the Bosnabahn, the city was connected to the railway network. In 1947 the Yugoslav State Railways converted the Sarajevo – Doboj section of the Bosna Railway to standard gauge and extended the route to Bosanski Šamac .

Zenica maintains twinning agreements with the following cities. The year of establishment in brackets.

Large cities in Bosnia and Herzegovina