Kiseljak from the air

Kiseljak from the air

Kiseljak ( Cyrillic  Кисељак ) is a city and association of the same name in Bosnia and Herzegovina , northwest of Sarajevo .

The city of Kiseljak is located about 25 km northwest of the capital Sarajevo, 12 km from Kreševo , 12 km from Visoko , 18 km from Fojnica and 25 km from Busovača and has an area of ​​165 km². The altitude is 470 m. The location is in a valley basin, which is surrounded by the mountains Jasikovac , Graščica , Berberuša , Plaz and Kruševska kosa . Kiseljak is located on the Lepenica , which flows northwest of the city into the Fojnica , a tributary of the Bosna . The city is part of the Central Bosnia Canton of the Federation of Bosnia and Herzegovina .

The 1991 census showed the following composition:

The oldest traces of human activity in the Kiseljak area go back to the early Stone Age . One settlement in the early Stone Age was exactly between the Catholic Church and the Hotel Dalmacija and the second in the village of Han-Ploća. Human remains were also found in the village of Banbrdo and on Mount Rat, but they could not be assigned to any culture.

In the Middle Ages , the Kiseljak area belonged to the Lepenica district, which was first mentioned in 1244. At the time of the Ottoman Empire , all districts were renamed nahija (Arabic: ناحية, Turkish: nahiye).

Kiseljak alone was mentioned for the first time in 1531 in the travel book of the Slovenian writer Benedikt Kuripešić. At the beginning of this century a certain Hadži-Uvejs built a mosque, a caravanserai (overnight accommodation for travelers) and a house for the guards of the city, so-called azapi, on the soil of today's town of Kiseljak .

Subsequently, Kiseljak visited many travelers, such as the French Maseliere and A. Chaumette des Fosses in 1806 and 1807, who wrote about the mineral water. You even mentioned that people come to Kiseljak from Carigrad, the former Istanbul. The German geologist Ami Boué visited Kiseljak for the first time in 1836 and again in 1838 and reported on the delicious mineral water and the many visitors to the city. The medieval finds are also enormous. A lot of tombs from the Middle Ages were found. The largest necropolis found had over 700 such tombs. A group of four sarcophagi was found separate from all the others in which the Bosnian prince Radoja Radosalić was found. The motif with the lion, which can be found on the coat of arms of Kiseljak, comes from him. On the mountain pass, which connects the village of Crkvina with the rest of the mountain range, there is a Greek cemetery with 75 tombs.

In 1908 an Illyrian helmet was found in the small village of Ukućevci, and the remains of an Illyrian settlement were found in the village of Bijela Voda. In 1923, the arheologist Mandić found the remains of Roman buildings in a field. In Podastinja, valuable money was found in 1884 from the dynasty of the Roman emperor Antonio, which was used between Septimius Severus and Gallienus at the time . Part of this money is in the National Museum of Bosnia and Herzegovina , and another part is in the Zagreb Archaeological Museum and the Franciscan Monastery (OFM) in Fojnica. In the direction of the Paroš river and the village of Ukućevci, there is one of the largest archaeological sites in Bosnia and Herzegovina.

At the end of 1991, Croatians organized themselves in Kiseljak to get weapons and prepare for the coming civil war. The barracks in Kiseljak were taken over by the Yugoslav People's Army without victims . The Croatians largely armed themselves with the weapons in the barracks and later formed the Croatian Defense Council ( Hrvatsko vijeće obrane, HVO for short). The civil war reached the Kiseljak border from the direction of Ilidža . The HVO had its first war activities in Jajce against the army of the Republika Srpska in Bosnia and Herzegovina ( Vojska Republike Srpske ). The war only broke out in Kiseljak with the conflicts between the Croats and the Bosniaks, who later organized themselves into the Army of the Republic of Bosnia and Herzegovina (ARBiH for short). The most characteristic clashes between the HVO and the ARBiH occurred in the villages of Han Ploča, Gomionica, Kazagići i Žeželovo. The HVO won all the fights there. The fights in Kakanj, Vareš, Konjic, Bugojno were won by the ARBiH.

Kiseljak was first mentioned in 1530. It has a large Stećci necropolis . There are archaeological finds from Roman times nearby.

From January 1993 to May 1994, the municipality of Kiseljaks was the scene of the Croatian-Bosniak conflict . The ARBiH forces attacked Kiseljak from April, the most powerful attacks were carried out by the government army in June 1993.

Kiseljak owns a manufacturing industry for leather and for the manufacture of metal goods, textiles and building materials. Kiseljak also has a mineral water spring called Sarajevski kiseljak .

In the past, the main events were the Kiseljak City Cultural Evenings (Kiseljačke večeri kulture (KVEK)). Today the main bearer of the cultural manifestations is the branch of rad Društva in Bosnia and Herzegovina, " HKD Napredak " which was renewed in 1990. The adult education center in Kiseljak actively organizes cultural events. It enables cinema shows and organizes the meetings of the majorettes.

The main national road that goes through the whole municipality is the national road M5 (from Kobiljače to Bilalovac). In recent years, many areas have been repaired and re-asphalted. The road has also been widened, which allows quick passage through Kiseljak. The section through the center is heavily used every day, as many trucks drive through and there is no bypass. The bad part of the route is in the village of Rauševac.

Even if three rivers flow through Kiseljak, Kiseljak has had problems with the drinking water supply for many years. Some places like Palež suffer from the reduction of water. This should improve soon, as a water line from Fojnica to Visoko, which would go through Kiseljak, is planned.

In the near future, Kiseljak should have a nationwide gas supply. At the moment, a gas pipeline with a prepared branch for Kiseljak runs through the localities Visoko - Kreševo.

There are a total of 65 catering facilities in the city. There are ten popular eateries for going out at night. The nightlife takes place mainly on Kreševska cesta street. Until recently there was a large discotheque “Club Pacific” in Kiseljak, which had to close due to the declining purchasing power of customers. The discotheque had a capacity of 5000 people.

The economic crisis reduced the city's budget, which meant that many construction projects had to be stopped. However, two projects should be completed in the near future. On the one hand there is the bridge in the locality of Rakite and on the other hand it is the connection of the street “Visočka cesta” and the street “Zenički put”.

Church in Kiseljak from the air

The parish of Kiseljak was created when the parish of Banbrdo was split off in 1876. In the beginning it was just a chapel, in which services were held for a long time. From that year the marriage register was also kept.

The construction of the church began in 1895. The architect was Josip Vancaš. The church was built very quickly so that the inauguration could take place in 1897. In 1901 the main altar was installed, which was made by Ferdinand Stuflesser in Tyrol. The Way of the Cross was also added at this time . The altarpiece of the prophet Elijah also comes from that time.

In 1984 the old church was torn down and the construction of the modern church began according to the project of the architect Antun Karavanić, with an area of ​​450 m². The hall for religious instruction is located in the basement below the church. There are three bells in the bell tower and the Way of the Cross was re-installed in 1998/99 by Antun Karavanić.

The interior work has been completed in recent years. The first step in this direction was taken in 2004 with the painting of the birth of Jesus by the academic painter Dražen Trogrlić.

In addition to the parish church, there is also a partner church in Brnjaci, which was built in 1967 based on a project by P. Nuić. A hall for religious instruction was also built adjacent to the church. In 1911, a new rectory was built on the site of the old rectory from 1876. The parsonage was 500 meters from the church, which is why a parsonage was built on top of the building of the hall for religious instruction between 1970 and 1973. The order of the Franciscan Sisters from Mostar Province is now housed in the old rectory . 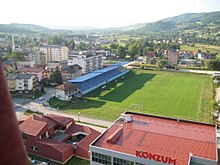 Football stadium of the NK Kiseljak

Among the sporting activities, the football club and the chess club are the most popular. These two clubs also bear the name of the city.

The chess club "Kiseljak" was founded in 1956 and is one of the best in Europe. In the period from 1987 to 1991 many chess competitions were held in Kiseljak, which shows the great importance of the chess club. The club can boast a number of successes, such as: Four times in a row the club was first in the chess league "Herceg-Bosna". In 2001 the club was first in team chess in Bosnia and Herzegovina. In the final of the Cup of the European League, which was held in Bugojno in 1999 , the club reached third place. In 2000 at the same Cup in Neum the club reached eleventh place and a year later in Crete the seventh place.

The club was founded in 1922 and has 200 hunters. The hunting area is 15,594 hectares. The basic game is roebuck, wild boar, hazel grouse, partridge, duck, geese and pond fowl.

The club kept this name until 1970, when it was changed to the “Lještarka” (hazel grouse) hunting club. This new name comes from the animal of the same name that once lived in the hunting ground. In the period from 1966 to 1990 the number of members increased steadily, in 1990 the association had 200 members. During this time, the association also built a hunting lodge in the Berberuša hunting ground, which was financed by members' funds. The hunting lodge was destroyed during the Bosnian War and has not been renovated since then.

In 1995 there was a meeting of the members of the hunting club and the activities of the club continued after the war. A year later the decision was made to build a new hunting lodge, which was also the top priority of President Anto Blažević and Secretary Rado Tomić. During this time the hunting lodge in the Palež hunting area and hunting lodges in the Lepenica, Gromiljak and Brestovsko hunting areas were built.

In 1659 the spring water was first mentioned as healing by Turkish travel book writers. The city of Kiseljak became famous for this healing effect of the water. The Turks called the water Ekši su , which translates as mineral water.

The water has been analyzed by some renowned science centers. It is known that drinking hot and cold mineral water, diet food, bathing in mineral water, carbon and mud baths, coatings and medication made from paraffin have healing results in chronic diseases such as diabetes, gastrointestinal diseases, liver diseases, circulatory diseases, metabolic diseases and rheumatism cause.

In the Kiseljak area, four springs (Park, Kiseljačić, Podgaj and Bio-han) have been converted into a well. All together with an output of 5 dm³ / s. The sources Park and Kiseljačić are used by the company “Sarajevski Kiseljak” with an annual production of 35,000,000 liters of mineral water. Today the Sarajevski Kiseljak company employs so many people that the Kiseljak economy would be unthinkable without the company.

TV KISS is a television station that was founded in 1992 and has its headquarters in Kiseljak. The coverage extends over the Canton of Central Bosnia , Canton Sarajevo and parts of the Canton Zenica-Doboj . That is a room of about 800,000 people.

TV KISS was initially called HRT Kiseljak. This station was the first in Bosnia and Herzegovina with Croatian symbols.