Kakanj ( Cyrillic  Какањ ; German outdated Kachanitz ) is a town in the canton of Zenica-Doboj in Bosnia-Herzegovina . It is located at the mouth of the Zgošća River in the Bosna, about 50 kilometers north of Sarajevo . 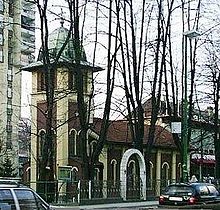 The Serbian Orthodox Church of St. Apostles Peter and Paul in Kakanj

Kakanj was founded in 1900 when the Austro-Hungarian monarchy in Bosnia promoted the extraction of raw materials. Today's city center was largely uninhabited at that time. Only when the mine opened in 1902 did a town slowly begin to form. At first only barracks for the workers and a few administrative buildings were built. There was also a hospital and a school. The Serbian Orthodox Church of St. Apostles Peter and Paul was built from 1925 to 1927 . A Roman Catholic Church was also built at the same time.

In the phase of industrialization of Yugoslavia after the Second World War, Kakanj played an important role with its large coal deposits. During this time the population of Kakanj increased. The construction of larger houses began and the industrial facilities were also enlarged. After the Second World War, the construction of a power station ( Termoelektrana Kakanj ) began and a cement factory was built in the 1970s. These two plants, together with the mining industry, form the core of the city of Kakanj. Construction of a mosque began in 1994 during the Bosnian War and was completed in 2000.

Kakanj is located on the Šamac – Sarajevo railway line of the Željeznice Federacije Bosne i Hercegovine (ŽFBH). In 1882, with the opening of the Bosnabahn, the city was connected to the railway network. In 1947 the Yugoslav State Railways converted the Sarajevo – Doboj section of the Bosna Railway to standard gauge and extended the route to Bosanski Šamac .