View from the M18 from

Olovo ( Cyrillic  Олово ; German outdated: lead ) is a small town in the center of Bosnia and Herzegovina , northeast of Sarajevo . It is the main town and administrative seat of the municipality of the same name ( općina ) in the canton of Zenica-Doboj with 10,578 inhabitants. 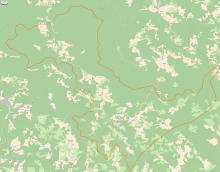 The city is located north of the capital Sarajevo on the M18 trunk road that leads to Tuzla . It lies on three rivers, the Stupčanica , the Bioštica and the Krivaja . The municipality extends to the west about 30 kilometers along the Krivaja. The other two rivers flow from the east towards Olovo, where they flow into the Krivaja. Neighboring municipalities are Ilijaš , Vareš and Sokolac in the south, Han Pijesak in the east, Zavidovići in the west and Kladanj and Banovići in the north.

For municipality Olovo include the following localities:

Olovo (Olovo, Plumbum, Piombo, Plombo, Olovo ) was first mentioned in a document in 1382 under the Latin name Plumbum ("lead"). In the 14th and 15th centuries, the place was a center of lead mining and lead trade. In the Middle Ages the place was owned by the Bosnian kings, later from 1404 owned by the Bosnian noble family Pavlovići . The place was then in today's Bakići near Olovo and was also known under the name Kamenica . As the story progresses, the name Kamenica is mentioned less and less. Instead, the name Piombo (Olovo) is being used more and more . Due to the exploitation of lead, the national structure of the population has changed again and again. The Saxons made up the majority of the population until the end of the Middle Ages . In the second half of the 14th century, the samostan Svete Gospe (Monastery of the Holy Matroness) was founded in Olovo , which is now the largest of its kind in the entire Balkans and is visited by Catholics from all parts of the former Yugoslavia.

As a result of the occupation of the Bosnian Kingdom by the Ottomans , a mosque was built in Olovo at the beginning of the 16th century, and as early as the 17th century, 75 percent of the city's population was Muslim.

During the Bosnian War , the community was largely under the control of the 110th Slavna Olovska brdska brigada , later renamed 161. Slavna Olovska brdska brigada , who were part of the 1st Corps Sarajevo in the Army of Bosnia and Herzegovina (ARBiH). Only the southern and eastern parts of the municipality were under the control of Vojska Republike Srpske (VRS). The community played an important role in the war as it was the only corridor between the government-controlled regions around Tuzla and central Bosnia. During the war, the VRS carried out two major offensives against the Bosnian government troops (ARBiH) in Olovo, with the aim of connecting the Serbian-controlled Romanija with the Serbian forces in the Vozuća near Zavidovići and thus the government-controlled northeastern part of Bosnia near Tuzla from Seal off central Bosnia and bring about a surrender of Sarajevo. They managed to take the two suburbs of Kruševo and Prgoševo. Prgoševo was retaken by the Bosnian army after a few days, while Kruševo was controlled by the VRS until the end of the war. Olovo was often a refuge for Bosniak refugees from communities in the east of the country as well as neighboring communities such as Ilijaš , Han Pijesak or Sokolac . Together with the brigades 1. sokolački bataljon and 126. ilijaška brigada , attacks were carried out on the community of Ilijaš, which is controlled by the Bosnian Serbs. At the same time they tried to break through the siege of Sarajevo together with other brigades from the 1st Army Corps of the ARBiH .

In 2009, protests were held in Olovo for the exit from the canton of Zenica-Doboj and the integration into the canton of Sarajevo , as the city is much closer to Sarajevo (50 km) than to Zenica (100 km). However, the advance failed.

The wood industry is the most developed, including the company SIP Stupčanica . There is also the textile industry with Alma Ras and many small companies.

There is also a thermal bath in the village, which also attracts tourists.

In 2018, the British company MineCo Group opened a mine for lead , in which the equivalent of six million euros was invested.

Olovo is part of the Sarajevo metropolitan area .