Žepče is a city in the Zenica-Doboj canton in Bosnia and Herzegovina . It is located on the Bosna River , about halfway between Doboj and Zenica . Politically, Žepče belongs to the Federation of Bosnia-Herzegovina .

The city first appeared in the history books of the Bosnian King Stjepan Tomašević in 1458 .

In the area around Žepče, which is predominantly populated by Croatians and Bosniaks, the so-called “hot war” began in June 1993 (beginning of the “ war within the war ” in Bosnia and Herzegovina) with an attack by the Bosnian government army on the Croatian units of the city.

In Žepče, the Croatian armed forces openly cooperated with the Vojska Republike Srpske . Through days of uninterrupted shell fire, shootings and street fights, almost the entire city was destroyed and many houses burned. 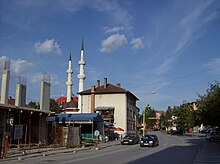 Žepče is located on the Šamac – Sarajevo railway line of the Željeznice Federacije Bosne i Hercegovine (ŽFBH). In 1879, with the opening of the Bosnabahn, the city was connected to the railway network. In 1947, the Yugoslav State Railways converted the Sarajevo –Doboj section of the Bosna Railway to standard gauge and extended the line to Bosanski Šamac .

The town was the home of the NK Žepče football club .