This article deals with the biblical person Elijah. Other people in this or a similar spelling under Elijah , Elijahu , Eliahu , Elia and Elias .

Icon of the prophet Elijah from around 1200 in St. Catherine's Monastery in Sinai

Elijah or Elijah (also Elias ; Hebrew אֵלִיָּהוּ ʾĒlijjā́hû , tooאֵלִיָּה ʾĒlijjâ ; Greek Ἠλίας Ēlías ; Arabic إِلْيَاس ʾIlyās) was a biblical prophet who lived in the time of Kings Ahab and Ahaziah in the second quarter of the 9th century BC. In the northern kingdom of Israel . His name means "My God is YHWH ".

According to the 1st Book of Kings , Elijah comes from Tischbe in the East Bank, which belonged to the northern kingdom of Israel. He is therefore referred to as a Tischbiter, which means that he belongs to the Israelites without land. He was one of the first to be disadvantaged in the 9th century BC. Large estates that arose in Israel.

In 1 Kings 17  EU Elijah is mentioned for the first time as a prophet who announces a drought for the whole country. Since the northern kingdom served the Baal of Tire at that time , this is a challenge to this god, who was considered to be the ruler of rain and fertility. Overall, the drought is said to have lasted three years and six months (cf. Jak 5,17  EU ).

Elijah is fed by the raven ( Gillis van Coninxloo , end of the 16th century)

During this time Elijah wandered into the Kerith torrent valley, which is east of the Jordan . Here he is miraculously fed by ravens . The drought reached the Kerith torrent valley and Elijah hiked to Zarephath , "which belongs to Sidon " (v. 9) and was in what is now Lebanon. Elijah stops by a widow who is preparing her last ration of flour and oil. It is entertained and, through God's blessing, the supply is always replenished. During Elija's stay with the widow, her son dies. By a miracle Elijah raises him from the dead.

King Ahab has everyone searched for the prophet and wants Elijah to be killed. Eventually Elijah is instructed to show himself to Ahab. Both blame each other for the drought ( 1 Kings 18.17ff.  EU ):

“And when Ahab saw Elijah, Ahab said to him, Are you there now, who is destroying Israel? But he said, I am not causing disaster to Israel, but you and the house of your father, by having forsaken the Lord's commandments, and follow the Baals. " 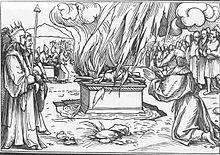 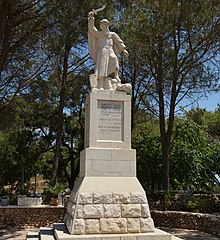 There is a trial of strength on Mount Carmel . Elijah has Ahab gather the people, the 450 prophets of Baal and the 400 prophets of the Holy Stake of Asherah . The representatives of the different faiths cut up one bull in each case, put it on wood and light the fire by the god of the respective prophet. Elijah proposes this test to determine the true God, and the people agree. The prophets of Baal pray until noon, even cutting their own flesh according to their rituals, while Elijah mocks them.

Elijah himself lets a lot of water pour over his victim, he fills the self-made trench of the altar he has rebuilt with twelve jugs of water. Elijah prays to YHWH once, and fire from heaven “consumes the burnt offering and the wood.” The people now recognize that the prophets of Baal are nothing but charlatans. ( 1 Kings 18.37-39  EU ):

“ 37 Hear me, Lord, hear me! Let this people know that you, Lord, are the true God and that you turn their hearts to repentance. 38 And the fire of the Lord came down and consumed the burnt offering, the wood, the stones, and the earth. The water in the ditch also licked it up. 39 All the people saw it, prostrated themselves on their faces and cried, Yahweh is God, Yahweh is God! "

At the instruction of Elijah, the people kill all 450 Baal prophets at the Kishon brook ( 1 Kings 18.40  EU ). Then the rain started again and the drought ended. The four hundred prophets of Asherah are no longer mentioned here.

After this trial of strength, Elijah has to flee Israel because Queen Jezebel wants to have him executed. He flees to Beersheba in the south of Judah . Then he flees into the wilderness and is depressed. An angel asks him to go to Mount Horeb . After a few demonstrations of power, during which YHWH does not show himself, he reveals himself to Elijah in a “gentle purr”. YHWH encourages Elijah by sharing the news that there are 7,000 worshipers of YHWH in Israel who did not serve Baal. YHWH sends him back and he is to anoint three men to perform a special task for YHWH: Hazael is to become king of Syria , Jehu king of Israel and Elisha the successor of Elijah.

After Elijah performed these tasks, he met King Ahab again and prophesied his death. With the help of his wife Jezebel, Ahab had seized the property of the ordinary Israelite, Nabot . King Ahab dies three years later. Queen Jezebel is said to suffer the same fate and is executed 15 years later by King Jehu. Ahab's son, Ahaziah, is injured in an accident and asks Baal-Sebub , the god of Ekron , about his fate. YHWH then instructs Elijah to tell Ahaziah that he is going to die because he has turned to a strange god and not to YHWH, the God for Israel. Ahaziah then wants to take him prisoner and sends a military unit of 50 men. These and one more will be destroyed by fire by God. Only the third unit is allowed to stay alive, because their captain begs Elijah for his life.

According to 2 Kings 2: 1–18  EU , Elijah is separated from his successor Elisha by a fiery chariot with fiery horses and is caught up in a storm wind to heaven without mentioning his death or the mourning of his successor Elisha. Earlier, Elijah had written a letter to King Joram of Judah with a judgment message. That is why the belief arose early in Judaism that Elijah did not die, but was taken into heaven alive. (see also Enoch ). Since then he has been considered the most important prophet after Moses . The prophet Malachi announces the return of Elijah as the forerunner of the Messiah. According to Mal 3, 23–24  EU , Elijah will move all Israel to repent to God and his commandments as well as to reconciliation with one another before God's coming judgment day. The reports of the Gospels show that at the turn of the times during the Roman occupation the expectation of the Messiah and the expectation of Elijah were particularly pronounced.

This expectation still plays a role in Judaism today. Elijah is primarily a symbol of steadfastness in times of oppression and idol worship. His arrival on earth is symbolically represented on Passover to this day. The Haggadah for Passover has handed down the following actions: At every Seder evening , in the sections Barech and Hallel, another cup for Elijah is set up and filled. If his cup is emptied, the apartment door is opened so that he can enter. A prayer of praise (Hallel = Psalms 113-118) is said and the door is locked again. The symbolic meaning of Elijah is expressed in some passages of the Seder.

Since Elijah did not die but was raptured, he appears time and again in the Jewish tradition as a mediator between God and man and his return as the forerunner of the Messiah is expected. 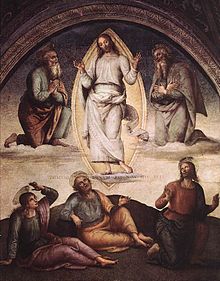 Transfiguration of Jesus on Mount Tabor , with the prophets Elijah and Moses

The New Testament also shows the expectation of Elijah's return . Some Jews saw in Jesus of Nazareth during his lifetime the returned Elijah ( Mk 8.28  EU ; Matt 11.13ff.  EU 17.11ff. EU ), presumably because some of Jesus' healing acts resembled the miracles of Elijah and Elishah, which are handed down in the Bible . The reports of the raising of Jesus from the dead ( Lk 7.11–17  EU ; Joh 11.32–44  EU ) were stylized in the New Testament as their surpassing. At the crucifixion of Christ, some Jews standing there misunderstood his Aramaic cry for Ps 22.2  EU as a call for salvation by Elijah ( Mk 15.34f.  EU ), who was seen as an advocate for unjustly convicted Jews.

Many early Christians, on the other hand, probably saw John the Baptist following Jesus ( Lk 4,25-27  EU ) as the returning Elijah, who prepared the way for the Messiah . This belief also shaped the Lukan reports on John the Baptist, in that the archangel Gabriel reveals this identity of his future son to his father Zacharias ( Lk 1,11-17  EU ). Not all early Christians shared this belief, because according to John 1.21  EU John denied being the returned Elijah. However, Jesus himself declares that John the Baptist is Elijah ( Mt 11.14  EU ; Mt 17.10-13  EU ), who according to the prediction ( Mal 3.23  EU ) will come to earth again as the Lord's forerunner.

The Carmelites venerate Elijah as a co-founder of the order. Therefore one finds him often represented in the group of the order donors, also in Rome in St. Peter's Basilica .

In the Koran this prophet is called Ilyās (إلياس), in the Arabic translation of the Bible Īlyā (ايليا). He is encountered in two Koranic suras . In Sura 6 : 85 the prophet is named in a series of "righteous":

"The Zacharias, John, Jesus and Elias (we have guided us) - each (of them) belongs to the righteous."

The idea of ​​righteousness is taken up again in Sura 37 : 123–132. In addition, the confrontation with the Baals worshipers is told in direct speech from God:

“Elias was also really one of the messengers [from God]. When he said to his people: 'Do you not want to be godly? Do you want to pray to Baal and give up [for] the best Creator [one can imagine], [the one] God, your Lord and the Lord of your forefathers? ' Then they pull the lie. [...] And we left him [as a legacy] among the later [generations] the blessing: 'Hail be upon Ellas!' So we reward those who are pious. He is one of our believing servants. "

Followers of Bahaitums believe Elijah was in 1844 Shiraz , in Iran , as Bab returned. However, they do not understand this as a physical return. Rather, they see in Bab the same spirit with which Elijah (like John the Baptist ) was filled. The remains of the Bab were buried on Mount Carmel , where Elijah had his argument with the prophets of Baal.

Usually the highest mountains on the Greek islands were named after Elija (see Profitis Ilias ).

The importance of Elijah for Jewish religiosity is expressed in the early frescoes of the synagogue of Dura Europos (Syria, 245–256 AD). The Prophet is also depicted in many prints and illuminated manuscripts of the Haggadah .

The appearance of Elijah in the Christian world of images has a typological meaning throughout , and thus refers to a New Testament event with the Old Testament foreknowledge. The Ascension of Elijah , which was already a theme in Byzantine art , is a prefiguration of the Ascension of Christ . The appearance of Moses and Elijah at the transfiguration of Christ also stands for this meaning. From the 13th century onwards, corresponding comparisons are illustrated in series in typological compendia ( Poor's Bible , Heilsspiegel , Concordantia veteris et novi testamenti, Bible moralisée ), for example

Post-medieval art hardly developed any further Elijah iconography and was limited to isolated depictions of moralizing, allegorical or emblematic nature. A large number of paintings with scenic depictions of this theme are known from Dutch painting of the 16th and 17th centuries.