This article deals with the abstraction principle in German civil law. For the principle of the same name in mathematics, see class (set theory) #Definitions .

It was developed by Friedrich Carl von Savigny in the 19th century on the basis of a quote from the classical Roman lawyer P. S. Julianus . Savigny's student Bernhard Windscheid enshrined the principle in the German Civil Code (BGB), which came into force in 1900. It has its roots in property law , which is why it is mainly used there, but its meaning goes beyond that, since the independence of the dispositions from a legal reason ( causa ) is a general principle of the BGB.

The abstraction principle is based on the principle of separation of contractual legal causal business from property law embossed abstract business . The legal positions of the two types of business are independent of each other.

Example to explain this principle:

Müller buys a car from Friedrich. He pays the same day. However, he does not receive the car and the papers until a week later.

German private law separates three processes (or legal transactions) here: First, Müller and Friedrich concluded a purchase agreement in accordance with Section 433 (1) BGB. This is a causal transaction ( obligation transaction ) with the content:

But has only given as Friedrich Müller the car, he has an abstract business in accordance with § 929 sentence 1 BGB, in the form of available business , the property transferred to Mueller.

Müller and Friedrich agree that Müller will get ownership of Friedrich's car (because Müller has a claim to it from the sales contract - 2nd process).

Müller, on the other hand, fulfilled his obligation by paying, i.e. transferring ownership and handing over the money immediately.

Müller and Friedrich agree that Friedrich gets ownership of Müller's money in the amount of the purchase price (because Friedrich has a claim to it from the purchase contract - 3rd process).

The abstraction principle is derived from the sources on Roman legal transactions. With regard to certain legal transactions, in ancient Rome it was planned to conduct them in the Roman Forum . From the sources it can be concluded that not only an agreement was necessary to achieve the desired legal effect, but for their performance a detached from her abstract act. The most famous archaic legal transaction of this type was the mancipatio by which, for example, the dismissal of the Son was caused by paternal authority or the release of a slave . The manipulation was also necessary to acquire Roman citizenship , a basic requirement for entry into one of the state offices. Only as a free Roman citizen could the young Roman, stepping out of the suzerainty of the family patron, build up his own existence. One way out was the regulation that after the son had been sold three times into bondage to another, the father would lose his power over the son. In order to achieve “emancipation”, the father at the forum transferred his son into the bondage of a cooperative third party, regularly a friend of the family. He immediately released the son from his service. After performing this procedure three times, the son was finally free and entitled to take on state offices. Savigny concluded that not only the emancipatory sequence of gestures was sufficient, but that it was also necessary to implement it on the forum.

However, this interpretation of the sources turns out to be incorrect. Regardless of the question of whether there was otherwise an abstraction principle in Roman legal transactions, Max Kaser proved that such procedures merely represented the fulfillment of formal requirements, as at the present time, based on existing formal requirements, declarations of intent , which are initially only made orally, again with compliance with requirements such as the written form or notarial certification must be repeated. The preceding informal declaration does not result in any obligation, but is informal and therefore ineffective. The Roman civil law - like the other European statutes based on Roman civil law such as the Code civil in France - did not know any abstraction principle. 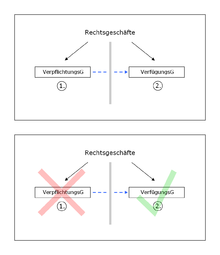 The abstraction principle states that the abstract transaction - in the example with Müller and Friedrich, i.e. transfer of ownership of the vehicle and transfer of the money - is also effective if the purchase contract as a causal transaction (obligation transaction ) is ineffective; this because both legal transactions are independent of one another in terms of their legal existence. Such a case would exist, for example, if Friedrich would have been incapable of doing business due to total drunkenness when the purchase contract was concluded ( Section 105 (2) BGB). The purchase contract would be ineffective, but Müller would still be the owner of the car if Friedrich had been legally competent again at the time of the transfer . The effectiveness of a disposition is independent of the performance claim from an obligation .

The advantage of the abstraction principle lies in the fact that the errors leading to ineffectiveness in the disposition transaction and the obligation transaction can be assessed separately. The relatively simple disposing (in rem) contract is effective regardless of the possibly complicated mandatory (contractual) contract. This creates legally vulnerable, but initially effective conditions, to which legal transactions can orientate their actions without the need for substantial checks. If Müller acquires the property through an abstract transaction, although the underlying causal transaction (the purchase contract) is ineffective, he can still sell the car on without worry: he has finally become the owner. If Müller debt has its creditors could the car pledge to need to make without worrying about the purchase agreement.

As the abstract effective rem business in mock obligation business but no final goods assignment is to be taken, there is the need for provisions in the event that the collateral business is done without an effective binding transactions is the (legal) basis for this. The right of enrichment ( §§ 812 ff. BGB ) serves to reverse the transaction . The BGB thus provides a possibility to dissolve the transfer of ownership. In the example above, Section 812 (1) of the German Civil Code (BGB) stipulates that Friedrich can reclaim ownership of the car if the legal reason for the transfer of ownership, which exists in the purchase contract, no longer exists or did not exist from the start.

While the obligation and disposition business are barely visible in everyday traffic, but rather occur through implied action , the formal separation in the purchase and sale of real estate is clearly pronounced: the contracting parties conclude the necessary contracts by notarization in front of a notary. Here, too, the binding transaction takes place first, namely the regulation that the seller sells his property to the buyer and receives a purchase price for it. Then the contracting parties also declare the relinquishment , i.e. they conclude a second contract in which they express agreement that ownership of the property should pass from the seller to the buyer. The conveyance is a prerequisite for an application to the land registry for the registration of the new owner. As a rule, it is only submitted to the land registry once the purchase price has been paid into a private trust account (e.g. notary trust account ). Only when the land registry has made the entry in the land register has the buyer actually acquired ownership of the property and the disposal transactions are also concluded. 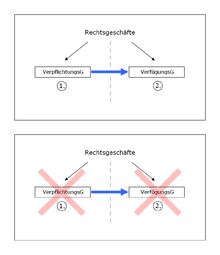 The French, Belgian , Luxembourg , Italian, Spanish and Portuguese law do not distinguish between causal and disposition transactions : for example, anyone who buys a car (in principle) also becomes the owner upon conclusion of the sales contract.

Corrections to the principle

In the so-called cash business of daily life, obligation and disposition business coincide. For this reason, an artificial separation is created by means of the legal second , which allows, for example, to clearly assign performance defects.

Not every contract of obligation creates actionable claims. The consequences of the abstraction principle are thereby broken. This applies, for example from the outset imperfect obligations, such as the natural obligations and various shape-cash debt contracts that take effect by meeting how the donation promise to § 518 para. 2 BGB.

Criticism of the principle of abstraction

The principle of abstraction has been criticized many times since it was first introduced in legal literature. Many authors criticize the fact that a uniform life situation is broken down into artificial parts. This is hardly understandable for legal laypeople. Uwe Wesel even criticizes that Savigny developed the principle of abstraction due to incorrect interpretation of historical sources, since no such principle of abstraction was known in Roman law. In Roman law, the validity of the transfer depends on the validity of the purchase contract. If this was ineffective, the ownership could not pass and the seller could request the purchase item back with the rei vindicatio . Furthermore, the abstraction principle leads to unreasonable results, since it adheres to the transfer of ownership even if there was no reason for this, for example the underlying sales contract is null and void. Heinrich Honsell defends Savigny by pointing out that he has rather made the “transfer” into a “tangible contract”, which is why we can only assume a new legal creation that leaves no room for a misinterpretation of the historical sources. The criticism reached a climax during the time of National Socialism , when the existing legal situation was rejected as “unvölkisch” due to its complexity and reforms were called for.

In the GDR , the principle of abstraction was abolished by the civil code of the German Democratic Republic (ZGB) of June 19, 1975, which came into force on January 1, 1976. For legal transactions carried out since October 3, 1990, the abstraction principle of the BGB applies again in this area.

A look at the exercise of the law shows that neither the abstraction principle of the Civil Code nor the causal principle of the civil code, for example, brings significant advantages. The same legal problems ultimately arise. The solutions resulting from the legal constructions are different. However, there is probably no different valuation.