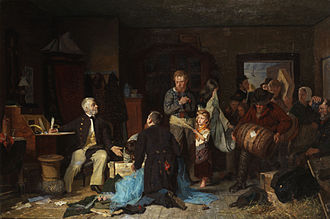 The liquidation of household goods , genre picture of a seizure, 19th century

In enforcement law (also called execution in Austria ), a seizure is the state confiscation of the debtor's objects for the purpose of satisfying the creditors .

The debtor pays the overdue receivables not the creditor, the creditor may lodge his claims in the context of the enforcement of using courts forcibly trying to collect. The prerequisite is an enforceable title (e.g. § 704 ZPO) with an enforcement clause ( § 725 ZPO) and its delivery to the debtor. The most common title is the enforcement order ( Section 688 (1) ZPO), which deals with the payment of a certain sum of money in euros . If the debtor does not object to a payment order , an enforcement order ( Section 692 (1) ZPO) is issued at the request of the obligee , from which the obligee can pursue foreclosure.

The debtor's movable property that is in his property is subject to attachment . The consequence of an effective attachment is entanglement and the right of attachment . A seizure is prohibited by law if it cannot be seized .

The seizure differentiates according to the type of the pledged object:

The specific procedure of a seizure is generally regulated in § § 753 ff. ZPO as well as the uniform state law enforcement agency (GVGA) issued by the state judicial administrations.

Search of the apartment

The attachment is carried out by a bailiff (in private law) or an enforcement officer in public law. The bailiff looks for attachable objects in the debtor's home . This includes all non-essential items. A number of objects (especially simple household items, work equipment and the like) cannot be seized (seizure protection, see list in § 811 ZPO).

Procedure and effect of the attachment

If the enforcement officer finds what he is looking for, he takes the objects or puts a pledge seal on them , the so-called cuckoo . Before the seizure, however, the enforcement officer should also weigh the value of the item against the costs arising from the seizure, as these must also be paid by the debtor. Often only a few particularly valuable or as good as new devices are seized because others would not cover the debt with their value. One speaks of a pocket attachment if, for example, the cash that the debtor is carrying is attached. Legally, the seizure by the bailiff entails the entanglement of the seized item and the creation of a lien . The extended rights now make the obligee into a pledgee .

The attachment of an already attached item (no claim: see Thomas / Putzo § 829 marginal number 2 ZPO) for a further monetary claim is called follow-up attachment . The old or, what is more common, a new creditor can be the creditor ( § 826 ZPO). In the case of several creditors, according to Section 827 of the German Code of Civil Procedure (ZPO), each creditor can carry out the realization himself, whereby the first pledgee is usually satisfied first. The bailiff who acts first is responsible.

How the seizure should actually take place is only rudimentarily regulated in Germany. Since there is currently no "Bailiff Act", the legitimation and activity of the bailiff result from § 154 GVG (Judicial Constitution Act) and above all §§ 753 ff. ZPO. The uniform bailiff business instructions issued by the state justice administrations apply across the country . It regulates the manner of foreclosure, compliance with which is the official duty of the bailiff. Breaches of duty, which in practice are in particular omitted enforcement measures , over- attachments or the enforcement of non- attachable property, can lead to claims for damages by the affected creditor or debtor from official liability in accordance with § 839 BGB lead.

In the literature it is sometimes criticized that the provisions on attachment of property ( §§ 811, 811a ZPO) have remained practically unchanged since 1877 and are only adapted or interpreted by the case law on a case-by-case basis. This means that there is considerable legal uncertainty in this entire area, which is increasingly affecting large sections of the population.

Seized items are publicly auctioned ( § 814 ZPO), either on site or as a generally accessible auction on the Internet via an auction platform, seized money is to be delivered to the creditor ( § 815 ZPO), seized securities are if they have a stock exchange or market price, to be sold by the bailiff at the daily rate ( § 821 ZPO). When using unseparated fruit, the bailiff has to have the harvest carried out ( § 824 ZPO). At the request of the obligee or the debtor, the bailiff can also use a seized item in another way, for example transferring ownership to the obligee himself or to a person named by the obligee ( Section 825 (1) ZPO).

The auction begins with the minimum bid. The claims of the creditors are satisfied from the proceeds of the auction. If there is still money left over, the debtor receives it.

Attachment of claims and other property rights

The attachment of claims and other property rights is regulated in §§ 828 et seq. ZPO and takes place in the German private law generally by the enforcement court adopted attachment and transfer decision , the public right by means of a by executing authority issued attachment available . Also domains are the opinion of the Supreme Court subject to attachment.

In Germany, a debtor is allowed to keep part of his monthly net income when his income is attached. The amount of the seizure exemption limit is graded according to the number of maintenance obligations of the debtor (employee).

The amount exempt from attachment can be increased at the debtor's request if he is otherwise unable to secure the necessary livelihood ( § 850f ZPO), as in the case of more than five dependent persons, high accommodation costs, dietary meals ( § 850f ZPO).

Income from overtime is only 50 percent, vacation pay cannot be seized at all. The annual bonus ( Christmas bonus ) is non-attachable up to half of the monthly income, up to a maximum of 500 euros. A number of other types of income cannot be seized, or only under special circumstances (such as allowances for the blind, compensation for pain and suffering ( § 850a , § 850b ZPO)).

On July 1 of every odd year, the seizure exemption limits change according to the percentage change in the basic tax allowance according to Section 32a (1) No. 1 of the Income Tax Act (EStG) in the version applicable on January 1 of the respective year.

Since January 1, 2012, a garnishment protection account ( P-account for short ) has been required in Germany for seizure protection for account seizures in accordance with §§ 829, 833a ZPO . Every bank in Germany has therefore been legally obliged since July 1, 2010 (as part of a transitional arrangement to prepare for the new account seizure protection law from January 1, 2012) to transfer an existing account to a seizure protection account at the request of a customer (only for a natural person) to convert. This means that it is no longer possible to block accounts up to a so-called seizure protection amount regulated by law (and for a certain period of time). Only one P account is possible per person. Seizure-free social benefits and maintenance obligations only increase the seizure allowance if the P-account holder has applied for this to his account-holding bank by submitting evidence.

The debtor can take action against the bailiff's approach in the event of attachment by issuing a reminder in accordance with Section 766 of the German Code of Civil Procedure. The debtor against the seizure itself wants underlying titled turn claim, he can enforcement countersuit gem. § 767 ZPO.

Since the bailiff does not examine the property situation when the movable property is seized by him, it can also happen that something is seized that does not belong to the debtor. In such a case, the German Code of Civil Procedure (ZPO) has provided legal remedies that help the actual owner regain his rights. On the basis of Section 771 of the German Code of Civil Procedure - the so-called third party objection suit - the owner can claim his rights through a judicial process. The prerequisite for this is that the foreclosure has already started - usually with seizure - and has not ended, as well as the impairment of ownership of a thing or a property-like right. If the action is successful, the court pronounces the inadmissibility of the seizure in its verdict and stops the enforcement of the item. Holders of a lien or right of exploitation prior to seizure in foreclosure can also assert their rights by filing a lawsuit. The difference here, however, is that holders of a lien or exploitation right are not supposed to prevent foreclosure. Rather, this is in accordance with the action for preferably satisfaction . § 805 ZPO granted a privileged rank in relation to the other creditors from the proceeds of the auction.

The execution method is as enforcement proceedings a civil case .

Under Swiss law, the debtor is required to be present at the seizure (Art. 91, Paragraph 1, Item 1 DEBA). After unsuccessful or inadequate attachment, the obligee is issued with a certificate of loss with which he can later assert his claim should the debtor regain his assets.