The Carmel or Carmel ( Hebrew כַּרְמֶל, derived from kerem 'el , "God's vineyard"; Arabic جبل الكرمل Jebel al-Karmil ) is a mountain range in Israel . It is 23 kilometers long and 8 to 10 kilometers wide and rises to a height of 546 meters along the Mediterranean coast . Because of the relatively high rainfall, the mountains have lush vegetation and have been declared a national park.

Figuratively can Carmel a convent named after the mountain Karmeliten or Carmelites call. 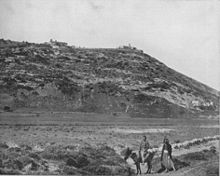 The Carmel at the time of the Ottomans in 1894

The mountains consist mainly of limestone and hard dolomite . Numerous caves have formed in the history of the earth. Due to the abundant rainfall, a wide variety of plants and shrubs thrive in the lowlands. Wine, oranges, bananas, figs and other fruits are grown in the valleys. Characteristic trees are the Aleppo pine , oak , carob , plane , juniper and cypress . The rich green vegetation of the Carmel with its rare flowers, the scent of oranges and olives is already praised in ancient chronicles. In 1860 Wolf Alois Meisel wrote about the Carmel:

“Secret shivers and horrors instill the ravines and caves in which the Carmel is so rich; he has the latter over a thousand. The most famous and greatest of them is the one in which the prophet Elijahu lived; for to him, the enthusiastic zealot for God, virtue and truth, the Carmel thanks mostly the character of holiness that clings to him. "

In the Carmel Mountains in 2019 was the first time Karmeltazit found on Earth, a mineral that had previously been found only in extraterrestrial bodies.

The area of Carmel is one of the early settlements of mankind outside Africa. In the caves of Kebara , Skhul (one of the caves of the UNESCO World Heritage acknowledged Nahal Me'arot ) and Misliya were traces of the Neanderthals and archaic Homo sapiens from before about 130,000 years ( Paleolithic ) found.

The god Ba'al was worshiped by the Canaanites at Carmel . According to Old Testament tradition , David is said to have been around 1000 BC. Have incorporated the area into his empire.

According to biblical tradition, the worship of Baal ended under the rule of King Ahab in the 9th century BC. After a rehearsal on Mount Carmel, where Elijah identified YHWH as the true God, the people killed the prophets of Baal ( 1 Kings 18: 18–40  EU ). Thus the worship of YHWH had prevailed against the forerunner religion. In the centuries that followed, rulership over the Carmel region changed frequently; the area belonged to the Assyrian , Roman , Byzantine and Ottoman empires , among others . From the time of the crusades , Christians settled on Mount Carmel. The mountains have belonged to Israeli territory since 1948.

In December 2010, a fire broke out in the northern Carmel Mountains, which spread to large areas of forest and caused great damage (see main article Forest Fire in Israel 2010 ). Several thousand hectares of forest fell victim to the fire.

Places in the area of ​​the Carmel

The terraced gardens in the Bahai World Center

The most important city in the area of ​​the Carmel is Haifa , which extends on the northern slopes of the mountains, the Karmelkap, over 300 meters difference in altitude from the sea up the mountain slopes. The high-rise tower of the university in the ridge area is particularly striking .

The Druze villages Daliyat al-Karmil and Isfiya , the two Christian Carmelite monasteries , the artists' village En Hod and Zichron Ja'akow , the city in which the largest Israeli wine producer Carmel has one of its headquarters, are also interesting for tourists .

Also in Haifa is the Shrine of Bab , which is located within the Hanging Gardens of the Baha'i . This architecturally interesting park extends over a kilometer down to the German settlement, which was built by the Protestant-Pietist temple society from 1869. Haifa is home to the Bahai World Center , which was declared a World Heritage Site by UNESCO in 2008 . In May 2001 a big event took place in the Bahai Gardens. The cantata O Queen of Carmel by Tolib Shahidi and the oratorio Traces of Light by the Norwegian composer Lasse Thoresen were premiered.

Religions and the Carmel

In the Tanach , in addition to the mentions in the story about Elijah (1 Kings 18), Mount Carmel occurs explicitly by name in other places:

In Christianity the order of the Carmelites has a special relation to the Carmel.

In addition, the world center of the Baha'i is now on Mount Carmel.