Episcopal Church of the United States of America 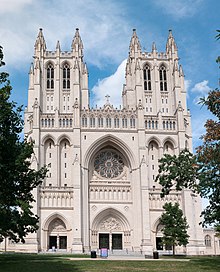 The Cathedral Church of Saint Peter and Saint Paul in Washington, DC is the National Cathedral of the Episcopal Church of the United States of America.

The basic unit of the Episcopal Church is the diocese . The consecrated head of the diocese is the bishop. The dioceses are grouped together in provinces, but unlike other Anglican churches, the provinces do not have an archbishop . As a result, there are no authority or jurisdiction in the provinces. The church is organized in nine provinces with 110 dioceses and 7,374 parishes. Other consecrated members of the clergy are priests (or presbyters ) and deacons . Ordination of women is allowed. Lay people participate fully in the life of the church and are also significantly involved in church governance.

The highest authority of the church is a synod that takes place every three years and is called the General Convention . It consists of two houses: the house of the bishops and the house of the deputies. The latter is made up of priests, deacons and lay people: each diocese elects four members of the clergy and four lay people as deputies. The President of the House of Bishops is the Presiding Bishop , who serves as the Primus of the universal Church and is elected every nine years. On June 18, 2006, Katharine Jefferts Schori was elected to this office as successor to Frank Tracy Griswolds , making her the first woman to serve as a primate in an Anglican church. The chairmanship of the House of Deputies is called the President and roughly corresponds to the Preses of a Protestant synod. He can be a priest or a layperson. The current president is Gay Clark Jennings . The last General Assembly met from July 5 to 13, 2018 in Austin (Texas) , the next is to take place in 2021.

The administrative headquarters of the church in New York City , but the Primate ( Presiding Bishop , Presiding Bishop) is in the Washington National Cathedral officially inaugurated into office. The highest body, the General Convention, does not have a permanent seat, but meets every three years in different places. The incumbent Chairman Bishop since 2015 has been Michael Bruce Curry .

See also : List of Presiding Bishops of the Episcopal Church of the United States of America

The Episcopal Church of the United States has nine ecclesiastical provinces that have numbers instead of names. Provincial boundaries typically follow the boundaries of the US state, as there are hardly any cross-border dioceses (but many US states have multiple dioceses within their borders).

Each province is divided into individual dioceses. Unlike in many other Anglican ecclesiastical provinces, there are no archbishops for the respective provinces, as the Episcopal Church has no archbishops.

→ Main article : Dioceses of the Episcopal Church of the United States of America

Each diocese consists of churches having different types: Cathedral, churches, missions and bands.

Most of the parishes are parishes . These are communities that are financially viable without monetary subsidies from the diocese. The community is headed by a priest who is called the rector . In larger parishes, other priests can also work as assistants. Parishioners also elect lay people (often, but not necessarily, twelve) to the parish council, which is called the vestry. Two members are elected from the Vestry, who are referred to as Senior and Junior Warden - alternatively also Rector’s - and People's Warden - and who take on special management functions. For example, the community's contract with the rector is signed by the senior warden ; the junior warden is often responsible for the upkeep of the church building. As with other boards, it is customary to elect secretaries and treasurers.

A cathedral serves as the mother church of a diocese and is the seat of the bishop, but often houses its own parish. Most - but not all - dioceses have a cathedral. A few have two cathedrals, or a cathedral and a pro-cathedral . Some designate the chapel of a church conference center as a cathedral. As a rule, the priest who acts as pastor of the cathedral parish is called the cathedral dean . The lay supervisory body of a cathedral is called a cathedral chapter, but some cathedrals also have a vestry.

A “chapel” is a community that is part of another institution, such as B. a school or a hospital, or that only meets seasonally, such as B. in holiday colonies or summer retreats ("summer chapels"). Here the pastor is usually referred to as a chaplain , although the term vicar is also used in the case of a summer chapel.

Within the Episcopal Church there are different degrees of liturgical practice. Churches or services are often referred to as “low church” or “high church”. According to the theory, a “high church” would be more Catholic , and therefore inclined to use signs of blessing (“smells and bells”), which embellish the basic liturgy with further specializations. In contrast to this, there are fewer such “Catholic” elements to be found in a “low church”; however, these could have other elements, e.g. B. “ Praise and Worship ” music or tend to a more strictly Protestant or even evangelical view. Although many Episcopalians would use these terms to describe their churches, the similarities are still great, and the basic rite is little different: readings from the Bible (both the Old Testament and the Epistles and the Gospels, respectively), followed by a sermon , the creed, intercession and the Eucharist , which is celebrated with wine (and not with water or grape juice as some US Protestants do); Alcoholics and others who want to avoid alcohol are free to forego the cup. A variety of styles of worship can be found within the Episcopal Church: traditional hymns, “praise and worship” music, Anglican chants, liturgical dance, charismatic hand movements, clerics in robes, and clerics in street clothes. As different as the forms of worship may be, there is a central connecting element between them: the Book of Common Prayer and the various supplementary agendas .

The Episcopal Church uses the Nicano-Constantinopolitanum as its main creed; in ecumenical matters, however , she regards the apostolic as sufficient.

The concept of saints in the Episcopal Church is heavily influenced by Catholic tradition. However, the level of veneration of the saints is generally more Protestant. Most Episcopalians do not pray to the saints and do not refer to them as mediators. Instead, the saints are seen as historical examples of good Christians. According to this understanding, a greater variety of people comes to be regarded as "saints" in the Episcopal Church, such as B. Martin Luther , Harriet Tubman or Samuel Seabury . The Church also teaches that all members are among the saints of God and have the potential to serve as examples to others. The Episcopal Church publishes the book Lesser Feasts and Fasts , which mentions the feast days of the various saints, who thereby receive special veneration.

The Episcopal Church publishes its own Book of Common Prayer (BCP), in which the course of most of the services (or "liturgies") used in the Episcopal Church are recorded. Because of its widespread use in the Church, the BCP is both a reflection and a source of theology for Episcopalians. The current edition is dated 1979 and is more than just a revision of previous books, but aims to revive the practices of the early Church , such as: B. full participation of lay people in all worship services and the resurrection of the Eucharist as the main worship service. Earlier BCPs were issued by the US Episcopal Church in 1789, 1892, and 1928; a proposed BCP was printed in 1786, but not approved by the Church. The BCP is not subject to any copyright; however, proposed changes to the BCP remain protected by copyright until they are approved by the General Assembly. Only then does the respective version of the BCP become public domain .

The first community from which the Episcopal Church was built, was in 1607 in Jamestown in Virginia as part of the Church of England established. From there, the church spread through English colonies in North America .

The Church of England became the State Church of Virginia in 1609, New York in 1693, South Carolina in 1706, and Georgia in 1758. This gave local councils taxpayers' money to support the Church. Virginia also tried to make church attendance mandatory, but a lack of priests made the regulations unenforceable.

The Bishop of London was declared responsible for the parishes in the colonies in 1635. Usually he carried out his duties with the help of commissioners appointed by him. James Blair was a major commissioner who served in that role from 1685-1743.

In 1775 there were about 300 independent communities within the Thirteen Colonies . During the American Revolution , the church was stripped of this status in those colonies where it still had state church status. In 1789 the Episcopal Church was founded as an independent church, because only by separating from the Church of England was it possible to circumvent the condition that the British monarch had to be recognized by the clergy as head of the church. When the Connecticut clergy elected Samuel Seabury to be bishop , he first sought episcopal ordination in England . There the Supremateid turned out to be problematic, which is why he traveled on to Scotland . There he was consecrated by the non-sworn Scottish bishops in Aberdeen on November 14, 1784, making him the first Anglican bishop outside the British Isles .

The Church in the United States, 1789-Present

As the territory and population of the United States grew, new dioceses emerged. Outside the USA, too, a few dioceses in Latin America and the Convocation of American Churches in Europe were established . After the first Book of Common Prayer , written for the new Church, appeared in 1789, new revisions appeared in 1892, 1928, and 1979.

1974, the feast day of Mary and Martha , eleven were women in the Church of the Advocate in Philadelphia , where Paul Washington held the office of the rector, of four bishops present for the priesthood ordained . This ordination violated current canon law and was declared invalid by the House of Bishops on Assumption . Two years later, in 1976, the general synod decided to allow women to be ordained. Threats from some conservative parishes and dioceses to split off were not implemented. The eleven invalid ordinations and four other ordinations of women, which also took place before admission, were recognized retrospectively in the following year.

In 2003 there was heated argument in the Episcopal Church (and subsequently in the entire Anglican Church Fellowship) over the question of whether Gene Robinson should be ordained bishop, as some members believed that lesbians and gays should remain celibate if they did so Aspired to the office of bishop. However, the majority of the general synod confirmed Robinson's election by the people and clergy of his diocese. A number of conservative congregations split off from the United States Episcopal Church in the course of the dispute; In addition, a number of African and Asian Anglican churches threatened to terminate communion with the American church. However, from the perspective of the Episcopal Church itself, the General Synod declared that the practice of blessing same-sex couples is not church-dividing. By a resolution of the Synod of July 2009, the bishops of the church in their dioceses should decide how to deal with the question of the blessing of same-sex couples. In the next three years the bishops gained experience with the blessings and developed liturgical guidelines. On July 1, 2015, the Episcopal Church made church weddings possible for same-sex couples.