Coat of arms of the Anglican Church of Canada 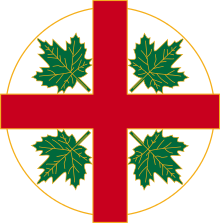 The 2011 census found that 1.63 million residents of Canada identify as Anglicans . This is 4.97% of the total population. There were 774,560 Anglicans living in the province of Ontario alone.

Official name of the Anglican Church of Canada

The church's current English name, Anglican Church of Canada , was adopted in 1955. Until then, the church was called The Church of England in Canada .

The French name of the church has been l'Église Anglicane du Canada since 1989 . Between 1977 (the canonical church laws were only amended accordingly in 1983) and 1989 it was officially called l'Église Episcopale du Canada in French .

Origins of the Anglican Church in British North America

The first clerics of the pre-Reformation Church in England were chaplains who accompanied John Cabot's expedition in 1497.

Anglicans were very large among the North American loyalists who fled to Canada after the American Revolution , and membership of the Anglican Church was characteristic of the ruling elite in the British colonies in North America at a time when the colonial governments were not elected by a colonial parliament (until approx. 1848).

Until the 1830s, the Anglican Church in Canada was part of the Church of England : bishops were appointed and priests were sent from England, and the church was funded by the British Parliament . The first Canadian Synods convened in the 1850s, giving the Canadian Church a degree of autonomy. 1861, as a result of the decision of the Judiciary Committee of the Privy Council Long v. Gray , all Anglican churches in colonies of the British Empire became autonomous. However, the first general synod for all of Canada was not held until 1893. There Robert Machray was chosen as the first primate.

In the first part of the 20th century, the ACC strengthened its traditional role as an establishment church, although there was also increasing influence from the social gospel movement , which was also spreading in Canada , and Christian socialism from parts of the Church of England also came in Canada expressed. Those influences culminated in the creation of what would later become known as Primate's World Relief and Development Fund in 1958 .

The change accelerated towards the end of the 1960s when Mainline Churches saw the first wave of membership and church attendance decline. Ecumenical relations were intensified with the aim of full church fellowship.

The supreme body of the church is the General Synod, which meets every three years and consists of lay people, priests and bishops from each of the 30 dioceses.

Most Anglican cathedrals in Canada are modest parish churches, with the exception of the Toronto , Halifax , St. John's and Victoria cathedrals , which are larger in size or have impressive architecture, although even these are rather modest by European or even Australian standards. Diocesan functions are therefore often held in church buildings of the Roman Catholic Church or the United Church of Canada because of the limited number of seats in most Anglican cathedrals . The Christ Church Cathedral in Ottawa , although it does not have a national designation like the Washington National Cathedral , is nevertheless the usual location for state events that are to take place in a church setting, such as B. State funerals for non-Roman Catholics.