Regina [ ɹɪˈdʒaɪnə ] (officially: City of Regina ) is the capital of the Canadian province of Saskatchewan . On June 19, 1903, it received city rights ( city ) and on May 23, 1906, the first provincial government under Walter Scott declared it the capital of the province founded the previous year.

No individual references have been added to the section >> History <<. None of the list of individual proofs can be assigned to this topic.

Regina was founded in 1882 when the Canadian Pacific Railway was building a transcontinental railroad through the region. The Dominion Lands Act encouraged settlers to come to the area where they could buy 65 acres of land for ten dollars. The town was originally known as the Pile of Bones because of the abundance of bison bones in the area . In 1882 the city was renamed Regina ( lat. "Queen") in honor of Queen Victoria . 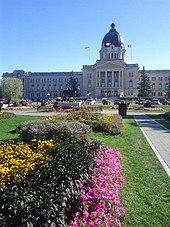 The Saskatchewan Legislative Building, seat of the Provincial Parliament

In 1883, Regina became the new capital of the Northwest Territories as competitor Battleford was not so close to the railroad. Regina remained the territory's capital until Saskatchewan's founding in 1905. On December 1, 1883, Regina was officially declared a town . The first mayor , David Scott, was elected on January 10, 1884.

A less glorious chapter in the city's history is Louis Riel's extradition here after his defeat by government forces in the Northwest Rebellion . Riel was found guilty of high treason and hanged on November 16, 1885. The trial is performed as a play every summer ( The Trial of Louis Riel ).

With a population of over 3,000, Regina was promoted to city on June 19, 1903 , with Jacob W. Smith as first mayor. After Saskatchewan became a province on September 1, 1905, Regina officially became the capital on May 23, 1906. In 1908, the first City Hall opened while construction began on the Provincial Parliament Buildings on Wascana Lake.

On March 4, 1910, a Roman Catholic diocese was established in Regina , which was elevated to the Archdiocese of Regina in 1915 . The episcopal church is the Holy Rosary Cathedral , which was built in 1912 and consecrated on June 29, 1913.

On June 30, 1912, a tornado devastated the city, killing 28 people, injuring hundreds and destroying more than 400 buildings. It took more than two years to repair the $ 5 million damage.

The Great Depression of the 1930s caused massive unemployment in western Canada . As the unemployed grew frustrated, 1,300 people in Vancouver boarded trains to Ottawa to seek work from the federal government. The situation escalated in Regina, where the number of protesters had risen to 1,800 when Prime Minister Bennett intervened and ordered the protest to be broken up. On July 1, 1935, the protests in the so-called Regina Riot reached a violent climax. One policeman was killed during the three-hour fighting and over 80 protesters, police officers and bystanders were injured.

The city's economy is characterized by the extraction and processing of raw materials, particularly crude oil , natural gas , kaolinite , sodium sulfite and bentonite . Agriculture is the second important industry. In addition, mainly technology companies that have settled in the Innovation Place Research Park contribute to economic prosperity. The service sector also plays an important role in the city.

The largest industries in the city are:

Regina is also home to a larger film production studio, Canada Saskatchewan Production Studios . The studio is the largest in the province and is used for feature film productions, television programs and series. 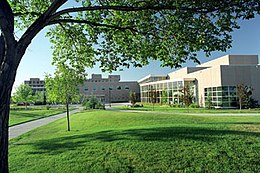 The University of Regina is located in the southeast of the city and has over 11,000 students. The Saskatchewan Institute of Applied Science and Technology and the Royal Canadian Mounted Police Academy are also located in the city.

The Regina Public School Board operates over 50 elementary schools and the following nine high schools:

The Catholic School Board operates 23 elementary schools and the following five high schools:

The First Nations University of Canada is the first and only Native American university in North America.

In 1908, the Regina Symphony Orchestra was founded, a professional symphony orchestra that has played symphony concerts at the Center for the Arts (now Conexus Arts Center ) since 1970 .

In 1998 Into Eternity was formed, a progressive death metal band.

View across Wascana Lake to the Regina skyline

The Wascana Center (WC) is a 9.3 square kilometer park that extends around Wascana Lake. There is also a waterfowl park in the toilet that is home to geese and other birds that do not fly south in winter. In Speakers Corner on the north shore of Wascana Lake, there are gas lamps from London and birch trees from Runnymede Meadow where King John in 1215, the Magna Carta signed.

In the fall and winter of 2003/04 Wascana Lake was pumped out and then dredged to make it five meters deeper. This should reduce weed growth during the summer months. The project was completed in mid-March 2004.

In the 1930s the lake was widened and dredged by 2,100 workers using only hand tools and horse-drawn carriages as a job creation measure. The Albert Street bridge that crosses the lake is listed in the Guinness Book of Records as the longest bridge that spans the smallest amount of water.

The Regina International Airport , which lies on the western edge of the city, has two runways, one of which flights to major cities in Canada and after Minneapolis offered (USA). The airport was completely renovated in 2005 and the passenger-friendliness was significantly improved.

The twin city of Regina has been the city of Jinan in the Shandong Province of the People's Republic of China since 1987 .

→ Main article : List of personalities of the city of Regina, Saskatchewan