Jezebel in the Old Testament 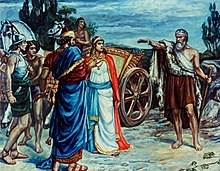 The most famous name representative is the Phoenician princess Jezebel in the 9th century BC. And daughter of King Etbaal of Sidon or, according to more recent research, of Tire in Phenicia .

Jezebel married King Ahab of Israel , whom , according to the biblical story in 1 Kings 16 : 29–34  LUT , she made to turn away from YHWH and to turn to her Phoenician gods. The consistently negative reception of Jezebel in the writings of the Old Testament is likely to be older than the Deuteronomistic History .

In the Old Testament, Jezebel was given responsibility for Ahab's misdeeds. She is accused of being responsible for the murder of numerous YHWH prophets so that she becomes the enemy of Elijah . When Elijah wanted to use a “divine judgment” to clarify who is responsible for or can end a drought that has lasted more than three years, he has Ahab gather the prophets of various faiths on Mount Carmel . Elijah said to Ahab:

Jezebel's character is also illustrated by the story of Naboth's vineyard in 1 Kings 21  LUT , according to which King Ahab first tried in vain to buy a vineyard from Naboth, whereupon Jezebel intervened, accused Naboth of having blasphemed God and King, and had him stoned. Even after the death of King Ahab, she had a strong influence, as her sons Ahaziah and Joram became kings in Israel. Like her sons, Jezebel was violently killed. According to 2 Kings 9 : 30–37  LUT she was overthrown from a tower at the instigation of Jehu and her corpse became the food of dogs, as it had been prophesied to her by Elijah.

In 2007, Marjo Korpel from Utrecht University was able to identify the Phoenician seal of Queen Jezebel, which is kept in the Israel Museum in Jerusalem .

According to legend, Jezebel is the great-aunt of Dido , the founder of Carthage . The biblical account helped make the name Jezebel synonymous with a devious, malicious woman.

Jezebel in the New Testament

Also in Rev 2,20  LUT a Jezebel appears; this Jezebel is a prophetess in the city of Thyatira . She is accused of seducing Christians to fornicate and to eat sacrifices to idols. The author of Revelation may have used the name Jezebel here to evoke associations with the Old Testament example.