This article covers the place Luleå; for the Swedish municipality of Luleå see Luleå (municipality) , for the asteroid see (6654) Luleå .

Luleå [ ˈlʉːleoː ] ( listen ? / I ) is a town in the northern Swedish province of Norrbotten County and the historic province of Norrbotten . It is located at the mouth of the Lule älv in the Gulf of Bothnia and serves as the seat of the province and capital of the municipality of the same name . In 2015, a good 76,000 people lived in the municipality and over 43,000 people in the crime scene Luleå, after the Björkskatan residential area, which was previously part of the city and located somewhat separately in the northern part, wasspun off as an independent crime scene. 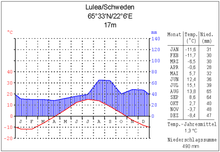 Luleå is about 110 kilometers south of the Arctic Circle at the northern end of the Baltic Sea .

The climate is cool and temperate with cold winters and mild summers with an average annual temperature of 1.3 ° C. The total annual precipitation is 490 mm. Every twelve months are humid .

When Luleå was first mentioned in documents in 1327, it was on the site of today's Gammelstad . It developed into a market square and the center of a parish which at that time comprised almost all of Norrbotten. A stone church was built in the 14th century - the largest north of Uppsala - and a church village was built around the church. In 1621 the place got city rights.

Due to the Scandinavian uplift , it became more and more difficult to enter the port, and in 1649 the place was relocated under its current name about eleven kilometers further southeast to its current location, while the church village was renamed Gammelstad . Luleå's importance as a port and trading post grew, and by 1780 the town had about 730 inhabitants.

In 1856 Luleå became the administrative center. In 1887 there was a major fire that almost completely destroyed the city. With the completion of the railway to Gällivare and the south in 1891 and later to Kiruna , Luleås began to flourish as the most important export port in northern Sweden. By 1900 Luleå's population had grown to around 9,000. In 1904 Luleå also became a bishopric.

Growth slowed in the first half of the 20th century, but with the construction of the Norrbottens Järnverk steelworks, now SSAB (Svenska stål Aktien bolaget), in 1940, another phase of expansion followed.

As a residential town and municipal capital, Luleå is an important administrative and service center. Luleå is also a Lutheran bishopric and home to Sweden's northernmost technical university ( Luleå Tekniska Universitet ) .

The Luleås industry is dominated by the SSAB Luleåverken steelworks , which has a blast furnace , steelworks and rolling mill for flat products and also supplies neighboring steelworks with pig iron. At the end of the 1980s, SSAB sold the SSAB Profiles Ltd. merged rolling mill with the profile business "Profilbolaget" to Ovako Steel Ltd, which in 1990 also relocated production from its Borlänge plant to Luleå. Despite the concentration, the Luleå rolling mill was in economic difficulties and all 600 jobs were at risk. In 1992, Karl David Sundberg, former managing director of SKF Steel, took over all shares in the profile business from Ovako Steel through his Inexa Steel Ltd. as the new subsidiary “Inexa Profiles” for a symbolic amount and was soon able to increase the workforce, halved to 300, to 400 again. Sundberg skimmed the profits, however, so that Inexa Profiles went bankrupt in September 2001 after heavy losses from 1999. Sundberg had previously threatened to go bankrupt if the neighboring SSAB steelworks did not lower the prices for crude steel, which they rejected with reference to the high profits skimmed off by Sundberg. The remaining 330 workers in the rolling mill had to be laid off. From 2004 to 2006 the technical equipment of the rolling mill was dismantled and shipped to Iran.

Facebook operates a total of three server buildings in Luleå, each with an area of ​​28,000 square meters. The company chose the location because the cool climate in this region makes it easier to cool the servers. It is also possible to run the data center here entirely with very cheap electricity from hydropower plants, i.e. with renewable energies . The server center was put into operation on June 12, 2013.

Luleå has good transport connections via the Baltic Sea port with the important ore port Svartö and an airport . A railway line leads from Luleå to Boden , 35 kilometers away , from where railway lines lead south, to Finland and to Norway ( ore railway ). Luleå is also on European route 4 . 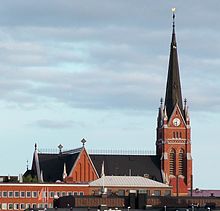 The city was rebuilt on a regular floor plan in 1887 after it was almost completely burned down. In the center of the city is Luleå Cathedral , a neo-Gothic cruciform church from 1893. The city also houses the Norrbotten Theater, set up in five former harbor stacks, and the Norrbotten Museum. The House of Technology is located on the university campus.

Gammelstad , the old center of the city, belongs to Luleå . Gammelstad is a UNESCO World Heritage Site .

Exterior view of the Coop Arena

The most popular sport in the city is ice hockey. The Luleå HF plays in the highest Swedish league, the Svenska Hockeyligan . The home games are played in the Coop Arena , which can hold 6,300 spectators .

Sister cities of Luleå are

Places in the municipality of Luleå