It has existed since the Bosnian War , is now mostly inhabited by Bosnian Serbs and has its own political system with independent legislative , executive and judicial branches . The capital is the Republika Srpska under Article 9 of the Constitution , the city of Sarajevo , which is not even in the Republika Srpska. The de facto capital, however, is the largest city of Banja Luka with almost 200,000 inhabitants , which has been the seat of government as well as the administrative, economic and cultural center since 1998 .

The area was a site of the 1992-1995 Bosnian War . This led to war crimes, including the Srebrenica massacre .

The main cities of the Republika Srpska are:

On March 1, 1992, the Republic of Bosnia and Herzegovina declared itself independent from Yugoslavia after a referendum, which revealed that over 99% of the voters wanted this. After Radovan Karadžić called for a boycott, the turnout was 67%.

The war goal of the Bosnian-Serbian leadership in the subsequent Bosnian War was to conquer as large parts of Bosnia-Herzegovina as possible and to unite them with Serbia at a later date in the sense of a Greater Serbia. She received significant support from the Milošević regime. This resulted in numerous “ethnic cleansing” and other war crimes against Bosniaks (for example the Srebrenica massacre , which is classified as genocide ) and Croats .

In the Dayton Agreement , the Republika Srpska with 49% of the territory of the Republic of Bosnia and Herzegovina was recognized as an entity of the newly constituted state of Bosnia and Herzegovina . In the area are cities such as Srebrenica , Višegrad and Foča , whose Bosniak or Croatian populations were expelled or murdered. The return of the displaced is made more difficult, among other things, by the persistent nationalism of the leadership of the Republika Srpska.

The Republika Srpska had 1,228,423 inhabitants at the 2013 census. The largest ethnic group, with 1,001,299 people (81.5%), were the Serbs , although their share had tended to decrease again since the late 1990s due to the return of Bosniak and Croatian refugees. However, the return of Bosniak and Croatian refugees has slowed down again. In addition to the Serbs, Bosniaks with 171,839 (14%) and Croats with 29,645 people (2.4%) are also considered to be constitutive ethnic groups. In addition, 25,640 other people (2.1%) live in the Republika Srpska who do not profess any of the three nationalities. The Serbs are mainly Serbian Orthodox and use both Cyrillic and Latin script. The Bosniaks are mostly Muslim , the Croats Catholic . Both use the Latin script.

The population structure in the Republika Srpska is shaped by the " ethnic cleansing " during the Bosnian war . Many non-Serbian residents were expelled or murdered with the aim of creating a Serb majority. On the other hand, Serbs fled from other parts of the country as well as from Croatia to the Republika Srpska during and after the war. In large parts of today's entity there was no absolute Serbian majority before the war, especially in the east ( Višegrad , Foča , Srebrenica , Zvornik ) and in the north ( Doboj , Derventa , Prijedor ). In most of the areas mentioned, the Bosniaks were instead the largest ethnic group.

At the beginning of the war in 1992 there were numerous murders and other crimes, including in the areas around Višegrad, Prijedor and Foča . In Srebrenica massacre Bosniaks were killed in July alone 1995 until 8000th In other areas, the Serbian population was also affected by displacement and other war crimes.

The International Criminal Court charged members of the military and political leaders with war crimes and convicted them.

Under the Dayton Agreement , all war refugees have the right to return to their homes.

Because of the precarious situation with regard to the return of expropriated property, the resentment towards the Bosniak and Croatian returnees, and because of the obstacles posed by the Bosnian-Serb authorities, the vast majority of the displaced Bosniaks and Croats have not returned, and some of them want to no return. 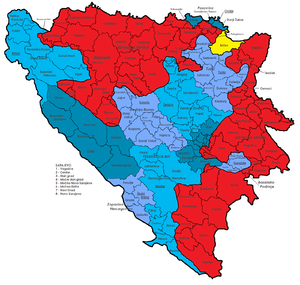 The political division of Bosnia and Herzegovina (clickable map, Republika Srpska in red)

The Parliament of the Republika Srpska consists of two chambers. The National Assembly has 83 members. There is also a Council of Nations with 28 members, in which eight Serbs, Bosniaks and Croats as well as four members of other ethnic groups are represented. Citizens directly elect the President and Vice-Presidents of the Republika Srpska.

According to the constitution, foreign policy , foreign trade , customs and currency policy , migration issues , international law enforcement, telecommunications and air traffic sovereignty fall within the competence of the entire state of Bosnia and Herzegovina . Since 2006, the state level has been responsible for defense policy and armed forces . All other areas are regulated at the entity level.

As a result of the elections in October 2002, the previous governing parties, SDS and PDP, were again able to form the government together with the SDA, despite losing votes . Dragan Mikerević (PDP) became Prime Minister in early 2003 . After the constitutional amendments of April 2002, Bosniaks and Croats belong to the government of the Republika Srpska for the first time. Dragan Čavić (SDS) became the new president . For the first time, a Croat ( Ivan Tomljenović , SDP) and a Bosniak ( Adil Osmanović , SDA) were appointed as vice-presidents.

Prime Minister Mikerević resigned in December 2004 in protest against sanctions imposed on the Republika Srpska by the High Representative of the international community, Paddy Ashdown , for lack of cooperation with the war crimes tribunal in The Hague. His successor was the former Minister of Industry Pero Bukejlović (SDS). The SDA was ousted from the government. In 2005 the PDP defined itself as the opposition, so that the government lost a majority in the National Assembly.

In the elections of October 2006, Milorad Dodik's SNSD (Alliance of Independent Social Democrats) replaced the SDS as the strongest party in the Republika Srpska. The SNSD was able to double its share of the vote to over 40% both in the elections for the state House of Representatives and for the National Assembly of the Republika Srpska. The SDS, which previously received around 40% of the vote, fell back to just under 20%. This balance of power remained roughly the same even after the elections in October 2010.

President of the Republika Srpska

Members of the Government of the Republika Srpska (April 1, 2015)

→ Main article : List of the Ministries of the Republika Srpska

→ Main article : List of municipalities in the Republika Srpska

The Opštinas of the Republika Srpska

The Republika Srpska consists of 63  Opštine (union communities; Bosnian , Croatian ; Općine ), which are shown in red on the map. The Brčko condominium , shown in green on the map, formally belongs to both entities, but is largely self-governing.

The existence of the Republika Srpska is particularly criticized by Bosniak parties. The complaint is that it is not a historical entity, but that it was largely the result of the ethnic cleansing carried out by Bosnian Serbs during the war from 1992 to 1995 and was then recognized as an entity by the Dayton Peace Agreement . On the other hand, some representatives of the Bosnian Serbs generally question Bosnia and Herzegovina's right to exist as an independent state, since the separation of the Republic from Yugoslavia was controversial among international lawyers and was carried out without the Serbian population, which was a constitutive ethnic group at the time, and thus never with a two - A third majority had been approved in a referendum . It is also pointed out that Serbs have lived in this area for centuries or have been expelled from other parts of Bosnia and Herzegovina. However, before 1992 there was never a dedicated Serbian state in what is now Bosnia-Herzegovina.

The Federation of Bosnia and Herzegovina is calling for the Republika Srpska to be more closely integrated into the Bosnian state association. Because of this, and in the course of the split of Montenegro from the confederation with Serbia , as well as the negotiations on the sovereignty of the Serbian province of Kosovo , which is under UN administration , the voices in the Republika Srpska on an independence referendum for Bosnia and Herzegovina became louder again.

According to an opinion poll carried out in June 2006, a majority of the residents of the Republic of Srpska support such an approach. However, since an independence referendum is not provided for in the Dayton Agreement , which contains the Constitution of Bosnia and Herzegovina, this is rejected by the international community. The Serbian side countered this by stating that Kosovo's independence was also incompatible with a valid international resolution, UN resolution 1244 of 1999, but that Kosovo was nevertheless led to partially recognized independence in 2008. 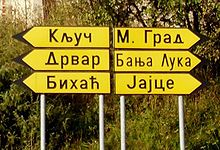 The Cyrillic version of Serbian is predominantly written on official signage and documents in the Republika Srpska . In the constitution, however, both Cyrillic and Latin script are expressly mentioned as official scripts.

Dispute over coat of arms and anthem 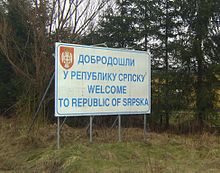 Welcome board of the Republika Srpska in Lukavica , a district of Sarajevo

The Serbian hymn Bože Pravde , previously also used in the RS, was replaced in July 2008 by the composition Moja Republika (my republic) by Mladen Matović.

In 2006, a comprehensive investment program of 1.5 billion KM was decided in the Republika Srpska. This was largely made possible by the income from the privatization (sale) of Telekom Srpske and the petrochemical industry. One of the investment projects is the construction of a highway from Banja Luka to Gradiška with an investment volume of 271.4 million KM. A further expansion of the motorway network is planned. Private investors are also interested in building new coal and hydropower plants.

Political division of Bosnia and Herzegovina