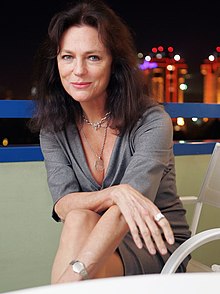 Bisset first worked as a photo model before switching to film in 1964. She had her second role in 1966 in Roman Polański's film When Katelbach comes ... , which was awarded the Golden Bear in Berlin . With her leading role in François Truffaut's The American Night (1973), Jacqueline Bisset established herself as a cinema star in Europe .

In addition to movies, Bisset also played in multi-part television programs and television series, including Napoleon and Josephine . She played a supporting role in Mr. & Mrs. Smith (2005), but the scenes with her were cut out for the final version.

For her role in the television series Dancing on the Edge , she was awarded the 2014 Golden Globe for best supporting actress in a mini-series .