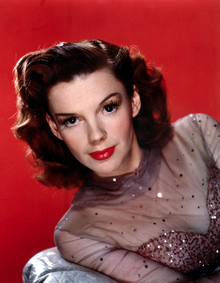 Judy Garland (born June 10, 1922 as Frances Ethel Gumm in Grand Rapids , Minnesota , † June 22, 1969 in Chelsea , London ) was an American film actress and singer . She became famous for her leading role in the classic film The Wizard of Oz (1939), in which she sings the original version of the song Over the Rainbow . She then made over two dozen films for MGM , nine of which starred alongside Mickey Rooney . Other well-known films are Meet Me in St. Louis , A New Star in the Sky and The Judgment of Nuremberg . As a singer, she filled numerous concert halls in the 1950s and 1960s.

In the course of her career she has received important awards such as the Grammy , the Golden Globe , the Tony Award and an Oscar of Honor. In contrast to her successful career, her private life was fraught with problems. She died of a sleeping pill overdose at the age of 47.

Judy Garland was born in 1922 as Frances Ethel Gumm in Grand Rapids, Minnesota, the third child of Francis Avent "Frank" Gumm (1886-1935) and Ethel Marion Milne (1893-1953). She had two older sisters, Mary Jane "Suzy" (1915-1964) and Dorothy Virginia "Jimmie" (1917-1977). The father ran a movie theater in town, and the family performed singing and dancing numbers during the breaks. In 1924 the Gumms sold their house and settled in California in the hope of being discovered in Hollywood by the film. In Lancaster , the father again took over a movie theater.

In 1932 they moved to Los Angeles . The three sisters appeared as Gumm Sisters in vaudeville shows. The star of these shows was the youngest daughter, Frances Ethel. In 1933 they were allowed to appear at the world exhibition in Chicago . In 1934, Frances changed her name to Judy Garland (presumably after the acting critic Robert Garland). At the age of seven, she made her debut in 1929 in the film The Big Revue and sang That's the Good Old Sunny South . The film was released on laser disc in the 1990s .

The talent scout Jack Robbins got her a contract with Metro-Goldwyn-Mayer (MGM) in 1935 . After a year of intensive training during which her father died of poliomyelitis , Garland appeared in her first MGM film alongside Deanna Durbin in Every Sunday in 1936 . The first film in which Garland played a major role was Broadway Melody of 1938 , in which she performed the song Dear Mister Gable . The studio built Garland's image as an all-American girl . Her involvement in the popular " Andy Hardy " film series , in which she played Betsy Booth alongside Mickey Rooney , confirmed her fresh popularity. Rooney and Garland were a screen couple in nine films and were also friends with each other.

Her best-known role was the Dorothy in the movie The Wizard of Oz with the song Over the Rainbow . The film adaptation of the children's book classic The Wizard of Oz by Lyman Frank Baum from 1939 is still one of the most famous films in the USA. Characters and storylines have become part of general US knowledge. Originally one wanted to engage for the role of Dorothy Shirley Temple , but the contract negotiations with her studio ( 20th Century Fox ) failed . For her portrayals in The Wizard of Oz and in the Andy Hardy films, Judy Garland received the then still awarded Juvenile Award (Oscar) for young actors. After the great success Garland played in other MGM musicals . Meet Me in St. Louis (1944) in particular is considered an outstanding example of the MGM style to this day, and Judy Garland became one of its most important interpreters.

However, the young actress was considered extremely difficult to film. It was later revealed that she had drug problems early on. She took stimulants and sleeping pills as needed, which was considered safe at the time. There were repeated delays and scandals that resulted in Garland being released from her contract in 1950. Because of her psychological tension and her unhappy private life, there was also an attempted suicide. Her marriage to Vincente Minnelli was on the verge of failure. In retrospect, she raised serious allegations against the MGM film studio and her late mother, who had exploited her financially ruthlessly.

Garland moved away from Hollywood and a difficult, unsuccessful period followed. She had many famous friends, such as US President John F. Kennedy , but suffered from a chronic lack of money. Eventually, on the advice of her third husband and manager, Sidney Luft , she returned to the stage. With a singing show, she toured across the United States, where crowds celebrated her with her film hits. The expulsion from MGM meant that she celebrated even greater success as a singer. She has given more than 1500 concerts in the course of her life and has been considered the highest paid stage artist in the world for years. The double album Judy at Carnegie Hall from 1961 is considered an outstanding documentary of their performances . The album reached number 1 on the US pop charts and was awarded five Grammy Awards .

In 1954 Garland returned to the big screen. George Cukor starred her alongside James Mason in A New Star in the Sky . She made a comeback and she received the Golden Globe for best comedy or musical actress for the role of Vicky Lester . In the same year she received an Academy Award nomination for best actress , but had to admit defeat to Grace Kelly , who accepted the film award for her part in George Seaton's melodrama A Girl from the Country . For Garland, the disappointment was so great that she only appeared sporadically in films, such as in Stanley Kramer's award-winning drama The Judgment of Nuremberg (1961), for which she received an Oscar nomination for best supporting actress . 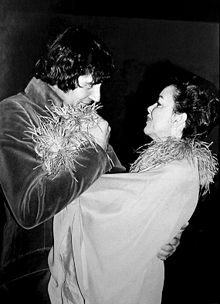 Judy Garland was divorced four times. From 1941 to 1945 she was married to songwriter David Rose , from 1945 to 1951 to director Vincente Minnelli , from 1952 to 1965 to show producer Sidney Luft and from 1965 to 1966 to actor Mark Herron . She married her fifth husband, the musician Mickey Deans , a few months before her death in 1969. Daughter Liza Minnelli comes from the marriage with Minnelli ; daughter Lorna Luft and son Joey Luft were born from the marriage with Luft .

She spent most of the last years of her life in London, where she married the nightclub owner Deans in March 1969, who arranged a concert tour through Scandinavia for her that same month . But the many exhausting years at MGM, her dependence on stimulants and sleeping pills, and severe hepatitis in 1969 finally took their toll. On June 22, 1969, twelve days after her 47th birthday, she died of an overdose of 10 tablets of Secobarbital , probably accidentally because the pack of 25 tablets was only halfway through and another bottle of 100 tablets was unopened. Her daughter Liza Minnelli said of her: "She lived eight lives in one."

On 27 June 1969 Garland was in Hartsdale ( New York buried). In January 2017 she was transferred to Hollywood Forever Cemetery in Los Angeles.

The American Film Institute leads Judy Garland among the greatest female stars of all time ( Greatest Female Stars of All Time ) 8th place since her death have been published more than two dozen biographies, including the biography of her daughter Lorna Luft Me and My Shadows: A family memoir . Luft's memoir was later filmed in the mini-TV series Life with Judy Garland: Me and My Shadows . Hollywood is working on another film adaptation and a play of her life entitled Get Happy: The Life of Judy Garland based on a biography of Gerald Clark. Anne Hathaway is said to play the lead role in both the film and the play. The biopic Judy with Renée Zellweger was released in 2019 .

Garland was posthumously awarded the Lifetime Achievement Award in 1997 , and many of her recordings were inducted into the Grammy Hall of Fame, including titles Over the Rainbow , Have Yourself a Merry Little Christmas, Get Happy, The Trolley Song, and The Man That Got Away . Garland has been immortalized twice on postage stamps in the USA, in 1989 as Dorothy from The Wizard of Oz and in 2006 as Vicki Lester from A Star Is Born.

The importance of Judy Garland for the gay scene

Judy Garland was an icon of gay camp culture until her death and has always had a large number of fans in the gay scene . When asked by a reporter at a press conference in the 1960s if she was aware of her loyal gay following, Garland replied, "I don't care, I sing for people."

Five days after their death, on the evening of their funeral, homosexuals first resisted routine police checks at the Stonewall Inn , a gay bar in Greenwich Village . This disorganized Stonewall uprising formed the starting point for the accelerated growth of the lesbian and gay movement and the emergence of international Christopher Street Day .

Although Garland's death is often seen as a trigger for this key event, especially in the American gay community , the timing is probably only a coincidence. Still, Garland's death, burial, and Stonewall links became part of American LGBT history and lore. When Rufus Wainwright appeared in New York with the same program as Garland 45 years earlier, he described the event as "the gayest moment of my life".