Jack Benny (back) with Harry S. Truman at the piano

Jack Benny (born Benjamin Kubelsky ; born February 14, 1894 in Chicago , Illinois , † December 26, 1974 in Los Angeles , California ) was an American entertainer and actor . Through radio and television shows, he became one of the most popular American comedians of the 20th century. In Germany he is a Polish actor Joseph Tura in To Be or Not ( or To Be Not to Be ) by Ernst Lubitsch known. 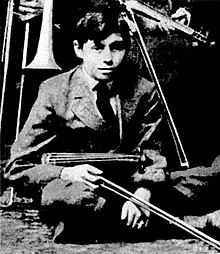 Jack Benny began learning the violin at the age of six. He left school early and was already performing as a teenager with his violin in a vaudeville theater in which the Marx Brothers were playing at the same time . Benny's instrument soon became a mere prop in a comedy number, and Benny's alleged musical ignorance became one of his hallmarks. (In truth he was an excellent hobby violinist who had a long friendship with the virtuoso Isaac Stern .) From 1917 to 1918 Benny served in the Navy and returned to the stage after the war.

He began to take on minor roles in Broadway shows in the 1920s and had his first film roles in 1930. Benny's breakthrough came on the radio, however. From 1932 to 1955 he was the star of various radio shows, the basic idea of ​​which he carried over to television almost unchanged from 1950 to 1965. The content of each show was alleged preparations for the next show, in which Benny played an untalented, permanently cranky presenter who was also extremely stingy. He used his alleged greed for a legendary appearance in 1955 on the quiz show The $ 64,000 Question . After correctly answering the first question, he got up and went home with a profit of $ 64. (Incidentally, his field of knowledge was violins .)

In most of his films, the radio star Jack Benny (. B. z played itself The Big Broadcast of 1937 ), but above all was to be or not ( To Be or Not to Be ) that Benny could play as a role. Shortly before his death, he was offered one of the two leading roles in the film adaptation of The Sonny Boys ( The Sunshine Boys ) by Neil Simon . Benny's cancer prevented his use, and Benny's long-time friend George Burns took over the role.

Benny bequeathed two violins he owned to the Los Angeles Symphony Orchestra . One of them was a Stradivarius , which he acquired in 1957 and which is now called Benny .

Benny is one of the comedians who appeared on US postage stamps as cartoons by Al Hirschfeld in 1991 . The others were Laurel and Hardy , Edgar Bergen , Fanny Brice and Abbott and Costello .

In 1989 he was inducted into the Radio Hall of Fame . Three stars on the Hollywood Walk of Fame remember Jack Benny.