George Burns (born January 20, 1896 in New York City as Nathan Birnbaum , † March 9, 1996 in Beverly Hills ) was an American actor , comedian and author . Burns worked as a vaudeville entertainer at a young age and made movies until 1994. One of the longest careers in American show business ended with his death.

George Burns often performed with his second wife, Gracie Allen . Together they had one of the most successful radio shows in the history of US radio, which ran for a total of 16 years from 1934 to 1950. The couple then switched to television and played in the popular sitcom The George Burns and Gracie Allen Show until 1958 . After his wife's health deteriorated noticeably and she finally passed away in 1964, Burns continued his career as a solo artist. The comedian was seen in Hollywood films from the 1930s onwards, but his comeback with the Neil Simon comedy The Sunny Boys was a sensation. In it he played together with Walter Matthau an old forgotten comedian couple who would like to perform again. For this role he received the 1976 Oscar for best supporting actor. He also starred in numerous television films and series. In the Simpsons episode Where's Bobo , George Burns is portrayed as Mr. Burns' brother. He is quoted as a reluctant film star .

In the later years of his life, Burns, whose trademark was his cigar, was considered a living legend and he continued to make comedies like Die Pensionner-Gang or Finally Again 18 . In 1988 he was awarded the Kennedy Prize for Lifetime Achievement and received the Screen Actors Guild Life Achievement Award in 1995 . He was awarded three stars on the Hollywood Walk of Fame in his honor . 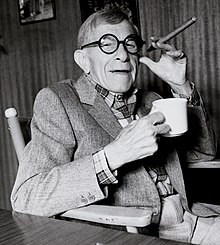