Liberty freighters - also known as Liberty ships - were general cargo ships of the type EC2-S-C1 . They were built as part of the Emergency Shipbuilding Program to make up for the great Allied losses in World War II caused by the submarine war . They were constructed simply and could be produced faster and more numerous over time. This enabled the Americans to build cargo ships faster than the German Navy could sink them.

Against the background of the initially successful German submarine warfare of the Second World War, there was a dangerous shortage of cargo space on the British side, which could not be compensated by the shipbuilding industry of the United Kingdom, which was mainly engaged in warship construction. The British government therefore sent a working group (the British Merchant Shipbuilding Mission ) to the United States and Canada in September 1940 to initiate a cargo ship emergency construction program. The group, led by Robert Cyril Thompson, carried plans for a simplified version of the 10,000- tonne trampoline Dorington Court, built in 1939 at Joseph L. Thompson and Sons in Sunderland , and convinced Admiral Emory Scott Land, President of the United States Maritime Commission (MARCOM ) that the slow, but simply constructed and above all quick to build tramp steamer design is preferable to a higher-quality but more complicated construction in the given situation. On December 20, 1940, two construction contracts for 30 units each of the ship type named Ocean were signed at the Todd-Bath Iron Shipbuilding Corporation in Portland, Maine, and Todd-California Shipbuilding Corporation in Richmond, California, and with the industrialist and shipyard owner Henry John Kaiser closed. The total construction price was about 96 million US dollars. On April 14, 1941, the keel of the first new Ocean building, the Ocean Vanguard , was laid, and was christened on October 15, 1941.

The Ocean type formed the basis for the development of the Liberty freighter by the New York marine engineering firm Gibbs & Cox. The design, which was later repeatedly modified, the basic design of which dates back to 1879, was additionally simplified and adapted to the welding technology. The main external distinguishing feature from the Ocean type was the deck structure that was folded in the middle. The Liberty ships were full-deckers . They had a welded hull reinforced by transverse ribs with seven transverse bulkheads and two continuous decks . They had five holds . A triple expansion steam engine was used as the drive, producing 2,500 hp at 76 revolutions per minute and enabling the ships to travel at a speed of around eleven knots . The boilers of the ships of the series built in Canada were fired with coal , those built in the USA with oil . 31,500 linear meters of sawn timber and 6,688 m² of plywood were required for each ship . The cargo ships were equipped with a distillation system for obtaining drinking water from salt water.

The advantages of these Liberty ships were the very short construction time, low costs, five large holds (they could transport 440 light tanks or 2840 jeeps ) as well as their simplicity and robust construction. The crews were able to move from one ship to another without any difficulty in handling.

The build quality of these simple ships, however, was insufficient. Many of them were still in use years after the Second World War, but the welding technology, which was quickly introduced for reasons of rational production (ships were riveted beforehand), was not yet fully developed. The steel produced in the Bessemer pear or the Thomas process posed a further problem . The high nitrogen content caused by the process promoted the tendency to brittle fractures . In cold waters, the weld area became brittle and within ten years around a hundred ships sank due to brittle fractures. Only in the post-war period was it possible to develop welding technology in such a way that the seam area also had a toughness corresponding to the steel material used. It was also only in the post-war years (1952) that the development of the LD process made it possible to manufacture weldable steels with high toughness.

The deficiencies in the construction and workmanship of the Liberty ships led to above-average losses during their operation in the post-war years. From the beginning of the 1960s, the proportion of these ship losses skyrocketed again, which led to the construction of numerous designs of Liberty replacement ships from the mid-1960s . 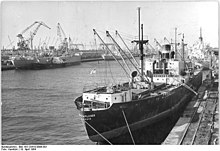 18 new shipyards with a total of 171 slipways were founded to exclusively build this type of ship . Existing shipyards also participated in the construction. On September 27, 1941, the Patrick Henry was launched in Baltimore at the Bethlehem Shipbuilding Company . She was the first of 2,751 (until October 1945) cargo ships of the EC-2 or Liberty type built in the USA and Canada during World War II . The ship took 244 days to build and was christened by Vice President Henry Wallace's wife . It was delivered on December 31, 1941. The Patrick Henry brought 110,000 tons of freight into ports around the world during the war, covering a distance of 90,000 nautical miles .

The hull of the ship had very simple shapes (a nickname based on it was, for example, bathtub , in German bathtub) and there were no difficulties at the shipyards to shape and assemble the ship's panels. Since individual sections were prefabricated, the average construction time of a ship was reduced to 40 days. The Robert E. Peary held the record : It only took four days and 15.5 hours from keel-laying to launch . The test drive followed just three days later.

A total of 196 Liberty ships were lost to enemy action during the war. From 1944, the much more modern Victory ship type replaced the Liberty ship as the most important standard freighter design - however, Liberty ships continued to be built until 1945.

The typical crew (64 men) of a Liberty ship consisted of (number in brackets):

Construction of a Liberty freighter

Construction of a Liberty ship at the Bethlehem-Fairfield Shipyards in Baltimore, Maryland (USA), in March / April 1943. 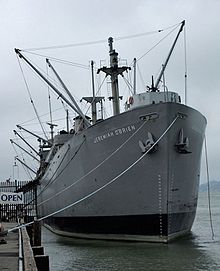 The Jeremiah O'Brien on the pier in San Francisco

The Hellas Liberty shortly after the restoration, 2010

The National Liberty Ship Memorial, Inc. (founded 1978) was looking for an original Liberty ship to be restored and preserved for posterity. Eventually the Jeremiah O'Brien that had stood the test of time was found. The ship can be viewed at Pier 45 in San Francisco ( California ) when it is not on its voyage, which takes it around the Bay of San Francisco twice a year. Of over 5,000 ships that sailed to the Normandy coast in 1994 in memory of Operation Overlord , the Jeremiah O'Brien was the only one that had participated in the operation in 1944. The ship's engine room served as the backdrop for recordings for the film Titanic .

Another museum ship is located in Baltimore ( Maryland , USA) at Pier 1. The John W. Brown was restored and preserved with the help of the National Maritime Historical Society . At the end of the 1980s, the Project Liberty Ship Baltimore was founded (made up exclusively of volunteers), which deals with the maintenance of the museum ship and also undertakes trips.

The Arthur M. Huddle was acquired in 2008 to serve as an exhibit in the Trokadero Marina Ship Museum in Piraeus. The freighter had previously been used as a spare parts dispenser in Baltimore from 1988 onwards. The ship was renamed Hellas Liberty and was restored from 2009 to June 2010 and can now be seen in the Hellas Liberty Museum in the port of Piraeus . It is intended to commemorate the 98 Liberty ships that formed the basis of the Greek merchant fleet after 1945.