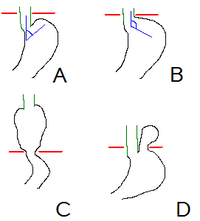 Hiatal hernia
Green is the esophagus, red is the diaphragm, black is the stomach, and blue is the angle of His.
A is anatomically normal, B is a cardiofundal malposition, C is an axial hernia, D is a paraesophageal hiatal hernia

There are different variants of the hiatal hernia: The cardiofundal malposition (see figure, letter B) is the lightest form and is a frequent incidental finding in gastroscopy. In this malformation, the cardia ligament, which connects the stomach with the diaphragm, is loosened. In medical and anatomical terms , the cardiofundal malposition is characterized by an obtuse esophagogastric angle (= His 's angle) (unlike the anatomical norm, in which this angle is acute, see illustration). Clinically, this condition only causes symptoms in the rarest of cases.

The axial hernia (see figure, letter C) - also called sliding fracture - is the most common form of hiatal hernia with 90%. The uppermost part of the stomach passes through the diaphragm up into the chest cavity (as in the case of a hernia of the diaphragm, for example ). In this pathological situation, the lower occlusion of the esophagus can no longer be supported by the diaphragm. This can lead to reflux, i.e. the stomach contents flowing back into the esophagus. This can lead to reflux esophagitis (heartburn), among other things . However, even with this form, 90% of those affected are symptom-free and do not require any further therapy.

The frequency of sliding hernias increases with age; more than half of those over fifty are affected.

The paraesophageal hiatal hernia (see figure, letter D) is characterized by the anatomically correct position of the lower esophageal sphincter (sphincter of the esophagus) and its unrestricted function. However, part of the stomach pushes into the chest cavity from below. In the extreme form of this hiatal hernia, the entire stomach can also lie above the diaphragm (upside-down stomach or chest stomach ). In the clinical course, the paraesophageal hiatal hernia begins with an asymptomatic stage. This is followed by the uncomplicated stage, with belching and a feeling of pressure in the heart area. These symptoms mainly occur after eating. Then it comes to the complication stage with passage disturbances, incarcerations , ulcers and anemia due to chronic bleeding.

There are also various forms of mixed hernias. In general, the formation of hiatal hernias is favored by lack of exercise and obesity .

Stomach volvulus can occur as a rare complication .

The heartburn is often proton pump inhibitor combated with drugs. The various forms of this hernia can be treated with healing (curative) surgery. The operations are carried out according to two method principles:

Under certain circumstances, both operating principles are used at the same time.