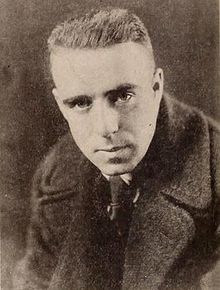 Raoul Walsh (born March 11, 1887 in New York , † December 31, 1980 in Simi Valley , California ) was an American film director and actor who could record over half a century of box office success. In his long film career he gained a reputation as a specialist in crime dramas , gangster films and westerns .

Raoul Walsh ran away from home as a boy and got by with various jobs. He went to sea for a while and worked as a cowboy and rodeo rider . In 1910 he came into contact with the film industry and in 1912 he was working as an actor and assistant director for David Wark Griffith . Griffith gave him the first opportunity as a director when his 1914 together Christy Cabanne with The Life of General Villa had turned one of the first full-length feature films. The following year, Walsh starred as Lincoln assassin John Wilkes Booth in Griffith's The Birth of a Nation .

It is rumored that Walsh made over a hundred feature films up until the 1960s, which soon earned him a reputation as one of the best craftsmen in the industry. As early as 1915 he caused a sensation with the innovative Regeneration , one of the first gangster films. Walsh's best-known silent films include the lavish adventure film The Thief of Baghdad (1924) with Douglas Fairbanks and the war drama What Price Glory? (1926), one of his greatest financial successes. He worked for William Fox's Fox Studios until the mid-1930s, before moving to Paramount and then to Warner Brothers . At Warner Brothers, he worked on several films with Errol Flynn in the 1940s after he fell out with his previously preferred director Michael Curtiz . Walsh also directed at his last command , the last joint appearance of the screen pair Errol Flynn and Olivia de Havilland . With Decision in the Sierra (1941) and Leap to Death (1949) Walsh also shot two classics of the gangster film. Towards the mid-1950s, Walsh revitalized Clark Gable's stagnant career and helped the actor make the top ten box office stars for the last time with the 1955 western Three Rivals .

His last directorial work was The Blue Squadron (1964), but in 1970 he wrote the screenplay for Tay Garnett's film The Delta Factor . Raoul Walsh was honored with a star on the Hollywood Walk of Fame . One of the director's trademarks was the eye patch he wore after losing an eye while filming In Old Arizona . In 1974 he published his biography Each Man in His Time .

The director was married three times and died on New Year's Eve 1980 at the age of 93. His younger brother George Walsh was also an actor.

Raoul Walsh's style is straightforward and straightforward. He preferred quick cuts and combined a good sense for the necessary drama of a scene with a trained eye for the set and the actors' leadership. Like few other directors, Walsh knew how to develop action scenes from the plot and not to lose sight of the characterization of the actors. Norbert Grob writes about this in his article:

“Raoul Walsh made naïve cinema without being naive himself, and he stuck to traditions without glorifying them. His cinema was - beyond rumors and tricks - a cinema of presence. What was visible should actually be there. That is why he developed a sure feeling for landscape and weather, for speed and rhythm, things and details, for gestures and gestures. When it was cold in his films, you could feel how cold, when it was raining, you could feel how much. "

As Fritz Göttler notes, in the end his heroes overcome their 'heroism'. He was a sought-after 'man director' who brought excellent acting out of Errol Flynn , Clark Gable and Gregory Peck . Alongside Henry King , Walsh is considered a master of ' americana ', the representation of an American society that is based on simple and honest interpersonal relationships.