Samuel Dashiell Hammett (born May 27, 1894 in Maryland , † January 10, 1961 in New York ) was an American writer . He also published under the pseudonym Peter Collinson . Hammett is considered to be the founder of the American crime novel ( hardboiled novel ) even before Raymond Chandler .

Dashiell Hammett's parents were Richard Thomas Hammett and Annie Bond Dashiell (from De Chiel in France ). He left school at the age of 13 and after a series of temporary jobs, joined the Pinkerton detective agency .

After participating in the First World War as a member of a motorized hospital unit , during which he fell ill with tuberculosis , he began to work in the advertising industry, from 1915 as an employee at Pinkerton. In 1922 he became a writer. A large part of his literary work is based on personal experiences he had as an employee at the Pinkerton detective agency. He published mainly in Black Mask magazine . The editor was Joseph Thompson Shaw .

In his detective novels , he described the American private investigator as an antihero . The realistic depiction of the criminal milieu as well as the amalgamation of criminal and detective set Hammett apart from the classic crime authors, who often make a dualistic division of society into “good” and “bad”. His best known character is Sam Spade from the novel The Maltese Falcon ; successfully filmed as The Falcon's Trail .

In 1920 Dashiell Hammett married Josephine Annas Dolan. He later dedicated the novel The Maltese Falcon ("For Jose") to her. The marriage resulted in two daughters, Mary Jane (1921) and Josephine ("Jo") (1926). Although Hammett was soon no longer living with his family, they did not divorce until 1937.

Dashiell Hammett's great love was the playwright Lillian Hellman , with whom he was dating from 1931. The relationship lasted until his death. In World War II, Hammett enlisted voluntarily and spent his military service as editor of an Army newspaper on the Aleutian Islands . After three years of service, Hammett left the Army Reserve in 1945 with the rank of sergeant major .

In addition to his novels, he wrote a number of short stories and was also involved in scripts (including the film noir ). After his last novel The Thin Man ( The Thin Man ) (1934), he devoted himself to the left-political and anti-fascist activities. He joined the Communist Party in 1937 and in 1946 became president of the Civil Rights Congress, which was founded in the same year .

In connection with this political commitment, Hammett was sentenced to six months ' imprisonment during the McCarthy era in 1951 for disobeying the court , from which he served five months for exercising his right to refuse to testify under the Fifth Amendment .

After Hammett was incarcerated in jail, the US Income Tax Service demanded an additional payment of $ 111,000 and confiscated his royalties . According to Hellman's account, this "lock" was never lifted for the remaining 10 years of his life. Hellman supported him financially. At that time, NBC discontinued Hammett's Spade series on the radio. The publisher also stopped the publication of A Man Named Thin . In 1953 he had to testify before the McCarthy Commission . The survey was televised. 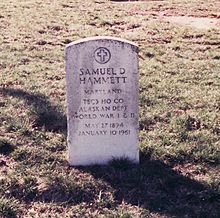 In 1955, Hammett suffered a severe heart attack and has lived largely withdrawn since then. Since 1959 he has received a $ 131 monthly pension from the Veterans Service . He died a poor man of lung cancer in 1961 and is buried as a war veteran of both World Wars in Arlington National Cemetery near Washington.

Posthumously he acted as the namesake for the Spanish Premio Hammett and North American Hammett Prize , literary prizes for crime literature. In 2011, the American Nero Wolfe Society (The Wolfe Pack) awarded him the Archie Goodwin Award posthumously in recognition of his literary life's work .

Numerous radio plays by a. the short stories with the anonymous "Continental Op" . The five " big " novels were produced by Norbert Schaeffer and Walter Adler for SWF / HR from 1996 to 1998 :