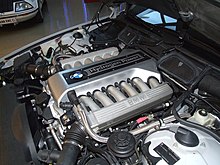 Hydrogen filler neck of a BMW

A hydrogen reciprocating engine for an automobile was first used in 1807 by the French officer François Isaac de Rivaz. He applied for a patent for this motor. In this engine, the hydrogen was carried in a balloon and blown into the side of the cylinder, where the hydrogen-air mixture was ignited with an ignition spark. The cylinder was quite long; During ignition, the piston was thrown upwards, at top dead center the piston fell back and a toothed rack attached to the piston engaged a toothed wheel that was connected to the wheels by a belt. The piston weight drove the wheels. Étienne Lenoir built the Hippomobile in 1860 , an automobile powered by a Lenoir engine that could use hydrogen produced by electrolysis as fuel. The not very reliable motor developed an output of 700 W at 80 min −1 and had an efficiency of around 3%. In 1938, Rudolf Erren converted some gasoline and diesel engines to run on hydrogen. In 1996 MAN tried to equip some city buses with hydrogen combustion engines. These engines worked according to the Otto process and had external mixture formation; later engines with internal mixture formation were also used. In 2000 BMW built the hydrogen vehicle E38 750hL with a reciprocating piston engine in small numbers of 15 units ; In 2007, the successor E68 was presented, 100 of which were built.

Hydrogen as a fuel

Hydrogen has a high energy content in relation to its mass, but since its density of 0.089882 kg · m −3 is not very high under normal conditions, the energy content in relation to its volume is very low. Therefore, the calorific value of a hydrogen-air mixture depends on how hydrogen and air are mixed with one another - the calorific value can be above or below that of a conventional gasoline-air mixture. Hydrogen has very large ignition limits , ranging from 4 vol% hydrogen ( air ratio ) to 75.6 vol% hydrogen (air ratio ). Theoretically, therefore, a hydrogen engine can still be operated with a homogeneous fuel-air mixture and the load can be controlled in the entire operating range of the engine by changing the quality . However, because of the wide ignition limits, it is also possible to use operation with an inhomogeneous, overstoichiometric mixture. As with other fuels, more ignition energy has to be used with a higher air ratio, but the necessary ignition energy for a hydrogen-air mixture is around 0.017 mJ (minimum value), only a tenth of that of a conventional gasoline-air mixture. At 858 K (585 ° C), the auto-ignition temperature of hydrogen is far higher than that of gasoline or diesel fuel, so hydrogen has a high knock resistance . However, this makes it more difficult to operate an engine that works according to the diesel process, which is why the charge temperature in a hydrogen combustion engine that works according to the diesel process must be increased by measures such as high compression in order to safely initiate spontaneous ignition. Since the laminar flame speed of a hydrogen internal combustion engine is very high with a maximum of 3 m s −1 , even with overstoichiometric mixtures, a short burning time can be achieved, which has a favorable effect on the efficiency, however, due to the rapid pressure increase in the combustion chamber, a greater load on the Engine means.

The hydrogen for the hydrogen engine is either liquefied (–253 ° C), highly compressed (300–700 bar) or stored in a chemical or physical compound (such as metal hydride or LOHC ). Metal hydride storage systems were still in the development stage in 2018. When storing in compressed or liquefied form, energy must be used to store the hydrogen; this corresponds to around 15% of the calorific value of the hydrogen. Liquid tanks outgas due to unavoidable insulation losses when not in use. With the BMW Hydrogen7, this process begins after 17 hours of idle time and can result in a half-full tank evaporating within 9 days. The disadvantage of metal hydride tanks is their high cost and low storage density of around 2 to 3% of the mass. Hydrogen can be stored and transported in liquid form without pressure through the hydrogenation of organic substances ( e.g. N-ethylcarbazole ). In mathematical terms, storage densities of 14–20 percent by mass are possible. Storage densities of 6–8 percent by mass were achieved in the laboratory.

Features of the hydrogen combustion engine

Because of the wide ignition limits, it is possible and, because of the better efficiency, also useful to adjust the torque in a hydrogen combustion engine only by changing the injected fuel mass and not to throttle the intake air (change in quality). In order to optimize the idling behavior and the burning time in the lower load range, however, it can be advantageous to throttle the intake air. If a three-way catalytic converter is used for exhaust gas purification, throttling can also be used.

The hydrogen stored under pressure is blown in gaseous form with a slight overpressure into the intake pipe in front of the inlet valves ( multi-point injection ). Central injection has proven to be unsuitable. The fuel is mixed with the air before it enters the combustion chamber. This mixture is ignited externally in the combustion chamber after compression. Since the hydrogen displaces some of the fresh air that is drawn in, the mixture heating value is lower than in a comparable petrol operation, which means that under the same conditions and with a stoichiometric mixture, the output is around 17% lower than in petrol operation. Alternatively, cryogenic (liquid) hydrogen can be injected. The comparatively warm intake air is cooled down, the gas mixture decreases in volume and the degree of filling improves. With kyrogenic intake manifold injection, the output is at the level of direct injection and around 15% higher than when operating with gasoline. However, with intake manifold injection, an increase in the engine load leads to re-ignition, since the mixture can ignite in hot spots, which in turn means a performance disadvantage.

In this mixing process, gaseous hydrogen is blown directly into the combustion chamber under high pressure. The charge mixture is cooled and ignited with a spark plug. The filling compared to the suction tube injection is higher and the lower Carnot process temperature is lower. This increases the thermodynamic efficiency and the performance. In the case of direct injection, there are various mixture formation concepts that differ based on the number of injections per work cycle (single injection or multiple injection) and based on the injection time.

The injection time can be selected early, so that the intake stroke is injected with the inlet valve open, but also late, so that the injection in the compression stroke occurs with the inlet valve closed. There is no clear limit between the two concepts, whereby the injection pressure must be higher the later the injection takes place. Injection during the suction stroke results in a mixture with a homogeneous mixture composition, while injection in the compression stroke leads to a stratified charge composition due to the insufficient time for complete mixture homogenization. Furthermore, there can be no re-ignition or pre-ignition during a compression stroke injection, since no hydrogen can enter the intake tract through the inlet valve (which is closed in this case) and there is no fuel in the combustion chamber during the early compression phase. Another advantage of compression stroke injection with mixture stratification is a very short combustion time with high conversion rates, which is beneficial for the efficiency and stable engine running, but this results in a very steep pressure increase in the combustion chamber that can exceed that of a comparable diesel engine. In the case of a homogeneous mixture, however, the burning time depends on the air ratio and the engine load point.

Since hydrogen has very wide ignition limits, it is in principle suitable as a fuel for a diesel engine. However, the auto-ignition temperature is very high at 858 K (585 ° C). This means that the final compression temperature in the combustion chamber must be around 1100 K (827 ° C) in order to ensure sufficient heat input into the hydrogen. Even with an increased compression ratio, it is not possible to reach this temperature. The intake air must therefore be preheated, which, however, makes it impossible to use it in a motor vehicle, such as a passenger car, since the preheating of the air can only be regulated with difficulty. In order to still use the diesel process, the principle-related self-ignition does not have to be initiated by self-ignition of the hydrogen, but by that of an auxiliary fuel. The diesel pilot injection process was developed for this purpose. In addition to the hydrogen, a small amount of diesel fuel is injected, which ignites more easily than hydrogen. Once this diesel pilot jet burns, it acts as a pilot ignition for the hydrogen.